India vs New Zealand resumed after rain interrupted the first semi-final of the ICC Cricket World Cup 2019 on Tuesday. 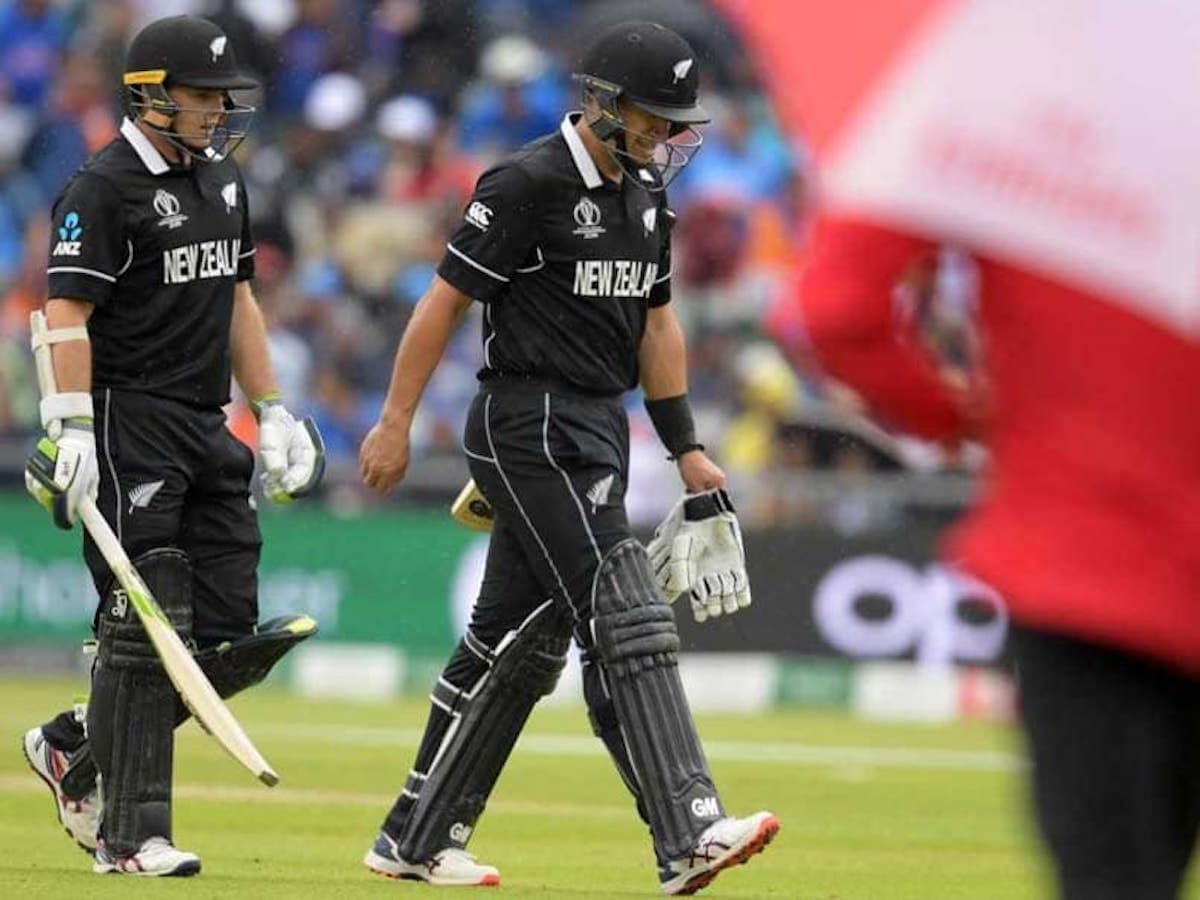 India have lost half their side for a score of just 71, with Rishabh Pant becoming the latest Indian batsman to be dismissed. Earlier, Pant and Hardik Pandya steadied the Indian innings after a spectacular top-order collapse saw India reduced to 5/3 in the 4th over of the innings in the India vs New Zealand World Cup semi-final in Manchester on Wednesday. Set a target of 240 to proceed to the World Cup 2019 final at Lord's on Sunday, all eyes will now be on former captain Mahinder Singh Dhoni and Pandya, with just Jadeja, Bhuvneshwar Kumar, Chahal, and Bumrah to follow. Earlier, New Zealand managed to score 239 in their allotted 50 overs, setting Virat Kohli's men a target of 240 runs to enter the Cricket World 2019 final. Earlier on Wednesday, resuming at their score of 211/5, New Zealand managed to add 28 runs in the remaining 23 balls.

Play in the India vs New Zealand World Cup semi-final resumed on Wednesday, with rain having interrupted the match on Tuesday just as New Zealand were about to finish their innings. The onus is now on KL Rahul, Rohit Sharma, Virat Kohli, and the rest of the Indian batsmen to stop New Zealand from entering their second consecutive World Cup final. Australia will play England in the other semi-final at Edgbaston on Thursday, with the winners of that clash facing whoever triumphs in the India vs New Zealand match in the final.

And then there were four. The league stage of the ICC Cricket World Cup 2019 is over, and we are five days away from finding the identity of the tournament winners. India vs New Zealand is the first semi-final, being played at Old Trafford in Manchester. All eyes will be on the weather, especially given the fact that India vs New Zealand was one of the matches that was rained out during the World Cup 2019 league stage, and rain stopped play in the semi-final on Tuesday as well. India finished the league stage as table toppers, and their reward is a semi-final clash with New Zealand, who managed to make it to the knockout stage of the tournament by edging Pakistan out on net run rate.

The pressure will be on India as New Zealand are arguably the weakest team remaining in the tournament. The underdog status, meanwhile, will suit the Kiwis to the tee, and they would fancy their chances of upsetting the Men in Blue and reach their second consecutive final. Lockie Ferguson missed New Zealand's previous match due to injury, but he was declared fit for the World Cup 2019 semi-final clash and took his place in the playing XI.

India had a few more decisions to make, with the first one being the bowlers that will play. Ravindra Jadeja and Yuzvendra Chahal played, which means Kuldeep Yadav missed out, while Bhuvneshwar Kumar found a spot in the Indian playing XI to share the new ball with Jasprit Bumrah, which means Mohammed Shami sat out.

The month-and-a-half long ICC Cricket World Cup 2019 is drawing to a close, with a total of 10 teams — Afghanistan, Australia, Bangladesh, England, India, New Zealand, Pakistan, South Africa, Sri Lanka, and West Indies — playing each other to determine the top four teams of the league stage. These teams will now play in the semi-finals, and you know how it goes then.

If you aren't lucky enough to be in England, you'll be likely be tuning in to the India vs New Zealand game and the rest of the ICC Cricket World Cup 2019 from the living room couch — or at the office. We aren't here to judge. In fact, we are just trying to make it easier for you.

Depending on which part of the world you live in, here's how you can catch a live stream India vs New Zealand game and the rest World Cup 2019.

Hotstar has digital rights for the Cricket World Cup 2019 in several parts of the world, including India, Bhutan, Canada, Maldives, Nepal, and the US. In India, Hotstar costs Rs. 299 per month or Rs. 999 per year. Those are currently the only two plans available.

Both PTV Sports and SonyLIV will offer live streaming of the World Cup to those living in Pakistan.

The Cricket World Cup 2019 will be streamed live on Rupavahini in Sri Lanka.

If you live in Bangladesh and want to catch the ICC World Cup online, you'll need Rabbithole Prime.

In the US, you can get a subscription to either Hotstar or Willow TV to watch the World Cup action online. This also applies to US territories such as Puerto Rico, Guam, Northern Mariana Islands, the U.S. Virgin Islands, and American Samoa.

In Canada, Hotstar is the sole online provider, as we said in the beginning.

How to watch live streaming of World Cup 2019 in England

Sky Go is the exclusive online broadcaster for the Cricket World Cup 2019 in England, Ireland, Scotland, and Wales.

How to watch World Cup 2019 live in South Africa

In South Africa and several African nations, you can catch a live stream of the Cricket World Cup 2019 on SuperSport.

How to watch live streaming of World Cup 2019 in Australia

Australians will need a subscription to Foxtel GO, Foxtel Now, or Kayo Sports to watch the World Cup action online.

If you're in New Zealand during the World Cup of cricket, you'll need to Sky Sports' Fan Pass to catch the cricketing action.

How to watch World Cup live telecast in West Indies

How to watch World Cup live in Afghanistan

Unfortunately, there doesn't seem to be an online provider for the Cricket World Cup 2019 in Afghanistan. At least not yet. It will be aired on Radio Television Afghanistan on TV, for what it's worth.

Fox+ is the sole online broadcaster of the Cricket World Cup 2019 in China, Indonesia, Japan, South Korea, and Thailand.