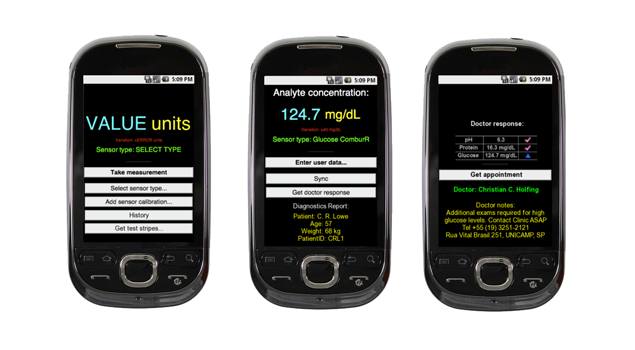 A new app which turns any smartphone into a portable medical diagnostic device could help in the fight against diseases including HIV, tuberculosis and malaria in the developing world, Cambridge scientists claim.

The recently-developed mobile phone application could take monitoring conditions such as diabetes, kidney disease, and urinary tract infections much clearer and easier for both patients and doctors, and could eventually be used to slow or limit the spread of pandemics in the developing world.

The app, developed by researchers at the University of Cambridge, accurately measures colour-based, or colorimetric, tests for use in home, clinical or remote settings, and enables the transmission of medical data from patients directly to health professionals.

Due to their portability, compact size and ease of use, colorimetric tests are widely used for medical monitoring, drug testing and environmental analysis in a range of different settings throughout the world.

The new app, Colorimetrix, makes accurate reading of colorimetric tests much easier, using nothing more than a mobile phone.

The app uses the phone's camera and an algorithm to convert data from colorimetric tests into a numerical concentration value on the phone's screen within a few seconds.

After testing urine, saliva or other bodily fluid with a colorimetric test, the user simply takes a picture of the test with their phone's camera.

The app analyses the colours of the test, compares them with a pre-recorded calibration, and displays a numerical result on the phone's screen.

The result can then be stored, sent to a health-care professional, or directly analysed by the phone for diagnosis.

The app can be used in home, clinical, or resource-limited settings, and is available for both Android and iOS operating systems, researchers said.

It has been shown to accurately report glucose, protein and pH concentrations from commercially-available urine test strips without requiring any external hardware, the first time

that a mobile phone app has been used in this way in a laboratory setting.

The app could also be used by patients to monitor chronic conditions such as diabetes, or as a public health tool, by enabling the transmission of medical data to health professionals in realtime.

"This app has the potential to help in the fight against HIV, tuberculosis and malaria in the developing world, bringing the concept of mobile health-care to reality," said Ali Yetisen, who led the research.

"By quickly getting medical data from the field to doctors or centralised laboratories, it may help slow or limit the spread of pandemics," Yetisen said.

The finding is published in the journal Sensors and Actuators B: Chemical.
Comments