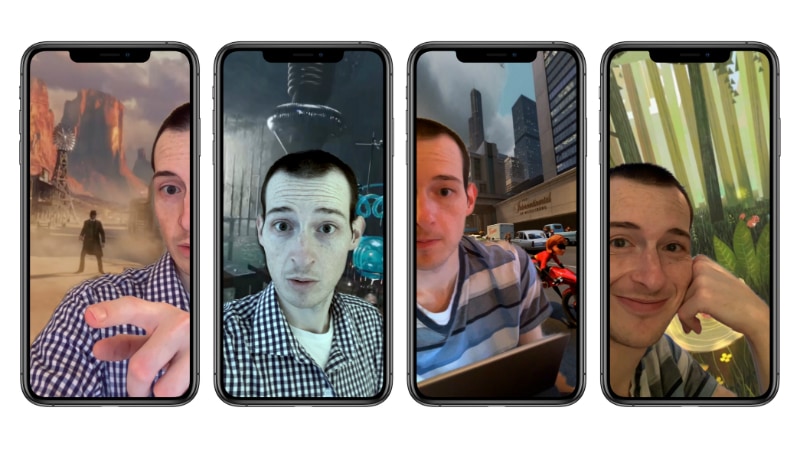 Apple's mobile video editing and sharing app Clips has received its latest software version 2.0.5 that brings 6 new Selfie Scenes including one based on Disney Pixar's Incredibles 2, improvements with the new A12 Bionic chip, three new filters, and a lot more. Additionally, GarageBand on iOS has received its latest update, while iMovie, Keynote, Pages, and Numbers have all been updated on iOS and macOS. Some of these updates bring features focused towards the new iPad Pro models that went on sale in the US and other launch countries this Wednesday.

The changelog of Clips version 2.0.5 shows an increase in the catalogue of AR-based Selfie Scenes, adding half a dozen more. The new scenes take advantage of the TrueDepth camera (iPhone X and above) to introduce elements like animal forest, monster laboratory, clouds, etc. A partnership with Incredibles 2 has led to a new Selfie Scene based on downtown Municiberg. Selfie Scenes are said to use the neural engine in the latest A12 Bionic SoC to make them more interactive.

Three new filters have also been added - monochromatic comic book, watercolour painting, and aged film. Apart from that, new titles cards with 8 new customisable posters, 8 new expressive stickers, 4 text labels, and 17 new royalty-free soundtracks have made it to Clips with this update.

With version 2.2.6 update for iMovie on iOS, you can “connect an external display to your iPad or iPhone and choose to mirror the iPad display or preview your video fullscreen while you edit - with support for uncompressed 4K video output on iPad Pro 11-inch or iPad Pro 12.9-inch (3rd generation).” Fullscreen video preview is supported on iPhone 7 and above, iPad 6th gen and above, iPad Pro (2017) and above only. The update also resolves certain video distortion and video sharing bugs, and improves stability especially for when you add speed change effects to a movie.

On Mac, iMovie version 10.1.10 removes the option to share video files directly to Facebook, but adds a new ‘Prepare for Facebook' option that exports a Facebook-compatible video file to the system. This file can then be manually uploaded to Facebook. The update also improves overall stability.

Next, the Keynote, Numbers, and Pages apps bring performance and stability improvements on iOS. The Pages app, on iOS, also brings the ability to directly publish your books to Apple Books for download or purchase. These apps get identical updates on their new versions for macOS.