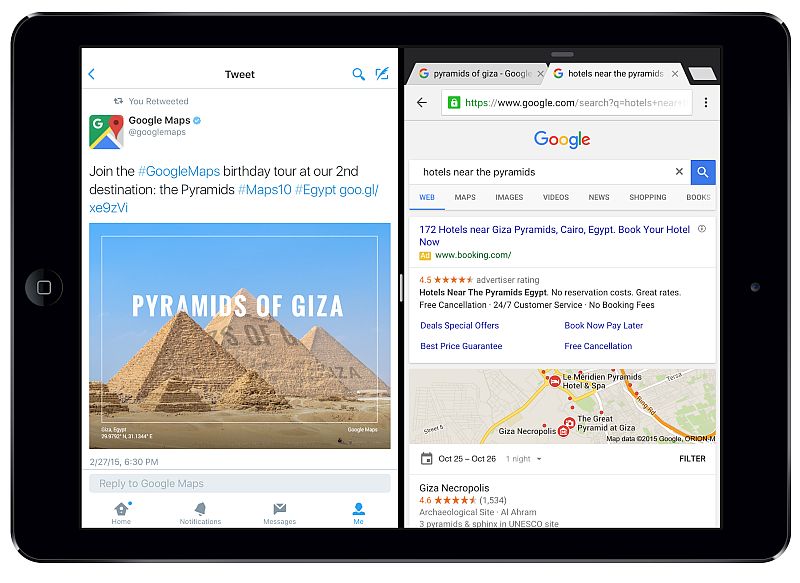 Google is adding the Split View multitasking feature for iPad to its latest version of Chrome. The browser will be also bringing the autofill feature seen on desktop and Android to its iOS app.

To recall, Apple introduced iPad-specific features including Split View multitasking with latest iOS 9. The feature allows the running of two apps side by side, in a split screen view. The Split View is currently available only on the iPad Air 2, iPad Pro, and iPad mini 4 at the moment.

Additionally, Chrome added the autofill feature to its iOS app that has been previously available to users on Android and desktop. The feature will save a lot of time when shopping as it will save from the pain of re-entering credit card details every time a user buys something.

(Also see: iOS 9: How to Use Split Screen Multitasking and Picture-in-Picture)

The latest version (v46.0.2490.73) of Chrome is now available to download via the App Store and requires iOS 7.0 or above. The update also brings improved handling of RTL (right-to-left) languages.

Announcing the news, AbdelKarim Mardini, Product Manager and Multitasker, Chrome in a blog post said, "Often on the web, we're doing a ton of things at once - reading up on an exotic travel location, catching up on social media or booking a hotel. With that in mind, we're introducing Split View for your iPad (Air 2 or mini 4) to our latest version of Chrome."

For owners of older generation iPad models, Slide Over (another version of Split View) will be available that allows to see Chrome over other running apps.