Bringing order to the chaos of a business card collection 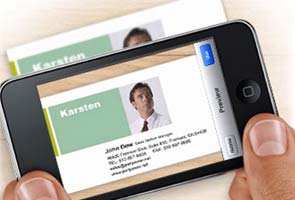 Highlights
There are probably people who take every new business card they receive and log its information into a database of some kind. Those people deserve a prize -- and a clinical diagnosis.

I have my own system: two drawers for semi-important cards, and a small box for more important ones. I call it the black hole system of content management, and it works as advertised.

Happily, one category of mobile app developers is trying to reform people like me by offering a way to quickly scan and organize business cards. And with apps like ScanBizCards ($7 on iPhones), WorldCard Mobile ($6 on iPhones) or CamCard (on all major smartphones, for $7 to $15), the developers appear to have a fighting chance. The black hole system could be a thing of the past.

Before we get to those apps, it's worth mentioning that many iPhone and Android users swear by the free Bump app, which wirelessly transfers contact information if you hold your phone next to the device of someone else who has also installed the app.

Bump works seamlessly, and the app now allows iPhone owners to transfer information to Android users -- making it one of the first cross-platform apps to show real potential. But the app is still new enough that you cannot expect others to have it, so instead of just grabbing someone else's information, you must first have a smartphone discussion.

Besides, the app is not yet on BlackBerrys, which renders it much less useful in business settings.

If you have CamCard, though, your business card management system should never resemble a black hole. Reviewers on iTunes, Android's Market and BlackBerry's App World have lauded the app for its simplicity and versatility, and in my own tests I experienced similar traits.

The app outdoes competitors in a couple of respects. First, it can scan cards in 12 languages, while others focus on English or, in the case of WorldCard Mobile, English and Chinese. CamCard also allows editing of the card's image, which will appeal to those who would prefer not to see a coffee stain each time they view an important card.

The basics of the app are straightforward. You open the program, take a photo of the card and give it a moment to absorb the information.

CamCard's developers say its scanning technology is more accurate than that of competitors, and in my informal tests, that was true. I let all three apps take a crack at the most beat-up sample I could find -- a five-year-old business card that I'd written on and kept in my wallet for months.

CamCard was the only one to render nearly every letter and number correctly. It did not categorize the cellular and fax numbers correctly, as did WorldCard and ScanBizCards. But compared with the other apps, I needed to do many fewer edits of the information it scanned.

After the scan, CamCard places the information into a virtual card holder that can be sorted by name. It also includes a search box at the top, a welcome feature that the other apps lacked.

The other apps were good, but over all, CamCard felt more refined.

And for those who cannot bear the thought of spending $7 on an app, CamCard offers free "lite" versions that scans cards but stores only a few.

WorldCard Mobile accurately read and sorted fax and mobile numbers, even when the card's labels used shorthand, and its text-scanning was fair. But I found the interface slightly confusing. It had no page where I could find all the cards I scanned. Rather, it exported all content to the phone's contact list.

For $4, you can buy WorldCard Contacts, an app that lets you sort the cards in various ways, and quickly open e-mail and text-message windows for each contact. It also lets you visit WorldCard's Web site, among other things. I used the app to separate contacts I'd made in different industries, and to revisit contacts recently used.

The Contacts app was helpful, but when packaged with WorldCard Mobile, the total price is $10.

ScanBizCards includes a version of the sorting service in its price. The options were slightly more limited -- the categories include name, company and date of the scan -- but in another section of the app I could view my contacts according to the group label I had assigned to them.

The app also included a Web component, which requires a $1 monthly subscription. When I scanned a card, in addition to recording the information on the phone, the app uploaded the data to a personalized Web address. The app synchronizes any changes you make, either online or inside the app.

I might consider paying for the service if I were a business card magnet, since many card scans require a small amount of editing, and editing is much easier on a Web page. Otherwise, I'd pass.

As a category, though, these are very good apps, and they should continue to improve with time -- or until the smartphone industry finds a way to make business cards disappear completely.

ListPro, a desktop software application that help users manage lists of all kinds, is now available as a free iPhone app. With it, you may create and manage lists, or choose from existing templates. For $20, you can download the desktop version (for Windows only) and sync your lists. ... Android users who work in the emergency response fields can lean on Firehouse Scheduler ($6) to help keep track of their shifts. LeakyNozzle.com has more information on that app. ... BlackBerry users looking to increase their workouts can now download a free coach. The miCoach app from Adidas helps pace you during runs, tracks your workouts and suggests shoe changes. It is available on BlackBerry models 8310, 8900, 9000 and 9700.

These digital trainers know how to motivate