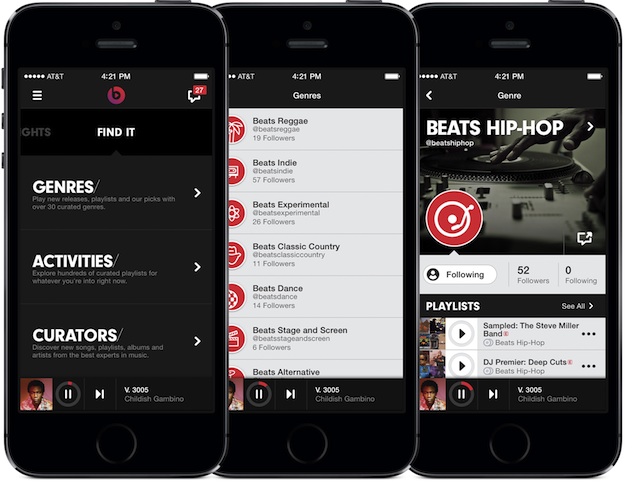 The newly released Beats Music app, available on the iTunes App Store, is something on the lines of the already available Google Play Music, Spotify and Rdio. The Android app will also be released soon.

The big question to be asked is, with a plethora of online music streaming options available, why did Beats launch its own, and how does Beats Music stand out?

The answer, according to Beats, lies in the fact that there are plenty of people who haven't jumped onto the subscription bandwagon yet. Also, after working with the likes of Trent Reznor and MOG (which will be shutting down on April 15), it feels that it has a lot more to offer. The Beats Music software will revolve around creating music streaming based on the user experience, and also personal and preferred choices of music. The answer to whether it will work will have to be seen.

The features that are offered with Beats Music are worth taking a note of. There are over 20 million songs available from the various music genres. A user also has the option of listening to a song instantly, or saving it and listening to it offline. Unsure users can turn to Beats Music to help create the right playlists and make the right choices. The Just for You feature has a series of genres and artistes hand-picked, or curated for the user by a team of Beats Music curators.

Depending upon the mood of a person, there is a feature that allows a user to change the 'sentence' or playlist to match how he or she is feeling. That in turn helps generate a personalised playlist. Another feature, Highlights, allows a user to check the latest happenings in the world of music. An unsure user can also use 'Find It' to reach the perfect playlist based on genre and the kind of activity being done. Share allows a user to share the music on Beats Music as well as social networking sites like Facebook and Twitter. This could be a handy feature for the new streaming service.

Beats Music is a subscription-based service available for $9.99 (roughly Rs. 650) a month on the iTunes App Store, and is initially free for seven days - so users can try it.

In addition, there is a spark of joy for users of the Windows Phones. Beats has released Beats Yo! for the platform, a drum computer simulation with 16 sample pads available for free. The features that it offers are also pretty interesting too. Four-track recording, cutting and arranging recorded four-bar loops and the ability to save and load them, makes an entry.

Amongst other features, Beats Yo! offers adjustable tempo, a metronome to keep time and a real-time check to fix any missed beats. Also it gives a shot in the arm to Windows Phones, apps which has still to lure the top developers in the industry to create apps for its devices. The WAV files that will be eventually stored on the device can be easily transferred via the Music\Beats Yo folder that is created within the Windows phone's flash storage.

The Beats Yo! drum kit is free for download and use. However, throwing in a bit of the commercial aspect has Beats Yo! offering in-app purchases where additional drum-kits can be bought. Of course, if one chooses not to purchase, they are left with just one drum-kit (the original free downloaded one). The app is only compatible with Windows Phone 8 devices as of now
Comments