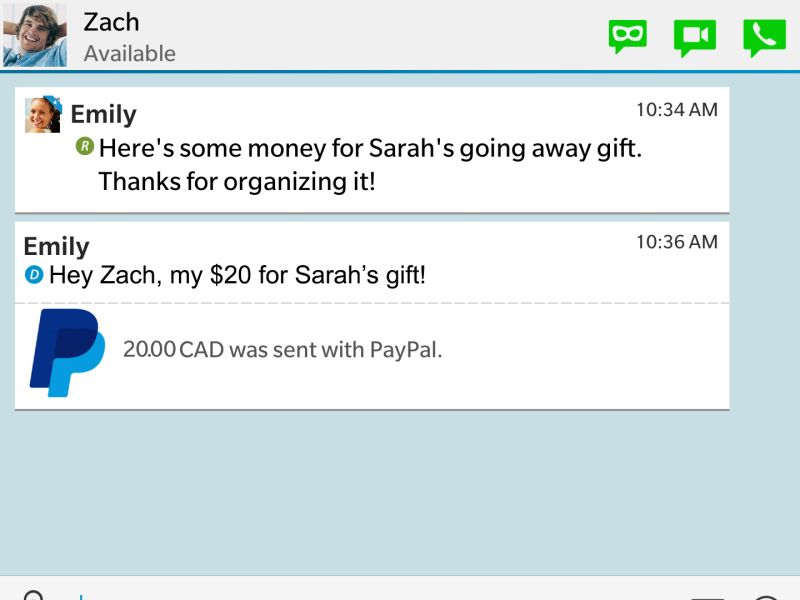 BlackBerry has been aggressively pushing its popular messaging service, BBM, for greater usability other than just chatting. Following its strategy, BlackBerry has now teamed up with PayPal to allow peer-to-peer (P2P) payments where the conversation is already happening in the BBM app.

The Canadian company confirmed that starting Wednesday select users in Canada on BlackBerry 10, Android and iOS phones can send money securely with PayPal straight from their BBM app. The feature will roll out to other regions in the "coming weeks." The company stresses that the method is easy and just requires users to connect their PayPal account to BBM.

"Just connect your PayPal account to your BBM. Once your family member or friend does the same, you can start sending money-it's that simple," states the company on official blog.

For sending money via BBM, users will have to tap on the "Send Money" icon in the app and connect a PayPal account. You can start sending money once the receiver (whom you intend to send money to) also connects their PayPal account to BBM. After adding PayPal accounts to the BBM app, users can directly send money by just tapping the icon, entering the amount, and then hitting send.

On being asked whether users also need to install the PayPal app for sending money via BBM, Matt Gromada, PayPal's Director of Consumer Product Marketing, explained, "No, you do not have to have the PayPal app on your device to send money as the transfer happens through BBM."

Gromada also confirmed that BBM in other regions will also get the send and receive money option via PayPal, "We are rolling out the beta experience starting with select users in Canada, with more countries to follow shortly," he added.

Notably, Facebook Messenger added a similar peer-to-peer (P2P) payments feature back in March this year, but only for US customers. The money transfer uses bank debit cards of members for a quick cash transfer, which may take up to three days depending on the banks used.

You're an Early Adopter of Tech, Your Pets Should Be Too
Delhi Government Proposes Free Wi-Fi Up to 1GB a Month