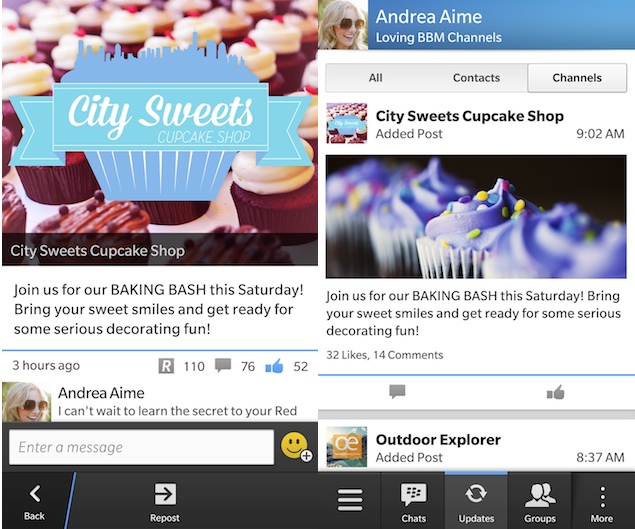 BlackBerry has announced the public availability of BBM Channels  (still in Beta) for BlackBerry users on BlackBerry OS 5 and above and BlackBerry 10, via BlackBerry World.

Users can simply update to the newest version of BBM to get access to the BBM Channels beta when it becomes available later on Wednesday. The company has also announced that BBM Channels will be coming to BBM for iPhone and Android devices in the coming months, without specifying a date.

BBM Channels are community-based broadcast groups or forums that allow people, brands and communities to interact with each other.

BBM Channels allows users to control content by giving them the flexibility to join or opt out of channels at their discretion, while it gives channel owners the ability to deliver content their communities are looking for, according to BlackBerry.

The BBM Channels feature was available in a limited beta since May 2013 for users registered with Beta Zone. "This broader beta will give BlackBerry users the chance to try out a growing number of channels and build their communities, either through their own channel or through new contacts made through shared interests on other channels," said BlackBerry in a statement.

"This beta period is also a great time for notable brands to test content and engage with users. For instance, Toronto Maple Leafs fans can go behind the scenes via the Leafs' BBM channel to get up close and personal with the team and engage in genuine conversations around their shared passion for Leafs hockey. In return, the Maple Leafs are seeing strong user engagement on BBM Channels," the company added.
Comments

Micromax A77 Canvas Juice with 3000mAh battery gets listed on official site
Apple is world's most valuable brand: Forbes