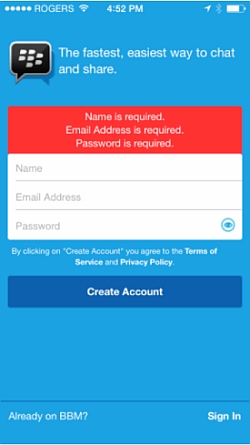 It was late last year that Canadian smartphone manufacturer BlackBerry released its BlackBerry Messenger (BBM) on Android and iOS platforms for free. Now the latest version of BBM (version 2.2) is available for download on Google Play, with the iOS version all set to hit the App Store in the coming days.

On the official BlackBerry blog, Inside BlackBerry, Jeff Gadway, head of product and brand marketing writes about the new version which has hit the Google Play store on Wednesday, "This next release (v.2.2) is focused on streamlining key aspects of the BBM experience. Our goal was to make it simpler for new users to join the BBM community and to make it faster and easier to add new BBM contacts."

The new features on BBM v2.2 for Android include an easier way to add contacts via email, wherein a user who receives a BBM invite by email can just become a contact by clicking on the link provided, rather than sending a PIN invite back, as is the current method. Even signing up for BBM is easier. All that new users require are an email ID, name and password, and they can start using it.

On the cosmetic side there are 16 new emoticons that will be added to the new version. These include a hotdog, hacker, a pair of hot lips amongst others. The 'Updates' tab has been renamed to 'Feeds', to represent a user better. It will include latest statuses and profile photos from BBM contacts and newer posts from the BBM channels that users follow. The latest version also brings a range of bug fixes and performance improvements.

It is also important to note that the previous update which had come to BBM (for Android, BB10 and iOS) around two months ago offered larger and bolder images, brought sticker support, as well as the ability to share photos in multi-person chats. It also increased the file sharing limit from 6MB to 16MB.

Windows Phone is still the only major smartphone ecosystem BBM has not yet made a foray into. It was however confirmed by BlackBerry that it is looking for a Q2 2014 release of BBM for Windows Phone.