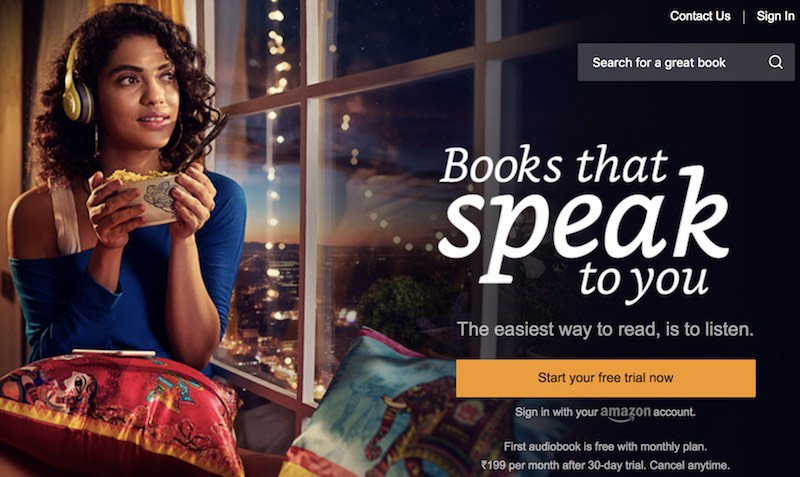 Amazon has finally launched Audible, its audiobooks subscription service, in India. Price starts at just Rs. 199 per month (roughly $2.70) and Audible is offering a 30-day free trial to all users, with many users also seeing a 90-day free trial option with a credit towards three free audiobooks.

An Audible India subscription claims to offer “over 200,000 audiobooks” that you can start listening to on your Android or iOS device by downloading the Audible app. Amazon notes that Audible in India still in “beta” with “more new and exciting Indian & international audiobooks” being added to the catalogue “every day”. You can also listen to audiobooks via the Audible website.

Similar to Prime, Amazon is offering Audible in India at a significant discount compared to the US. An Audible subscription costs $14.95 per month in the US, so the India pricing is less than one-fifth of that amount.

There are some key differences though, as Audible subscribers in the US get access to three titles (one audiobook + two Audible originals) per month at that price, while subscribers in India will be restricted to just one title a month.

In other words, you get one credit a month that can be redeemed towards any title that's part of the Audible India catalog, regardless of its price. This book gets added to your Audible Library and you can listen to it at your convenience.

Amazon highlights that subscribers will get to keep the audiobooks already present in their Audible Library even after they cancel their membership. You can roll over up to six unused credits to the next month if you don't see anything you like in a particular month, and even exchange titles you don't like after you've redeemed a credit.

Apart from monthly membership, Audible India is also offering 6- and 12-month subscriptions priced at Rs. 1,345 and Rs. 2,332 respectively. Audible members will be able to buy additional audiobooks beyond their free monthly credit at a 30 percent discount compared to the books' usual price.

The Audible launch is Amazon's latest attempt at expanding its footprint in the Indian market. The e-commerce giant is coming off the back of a successful festive season, where it hosted three big sales in as many weeks to rival the Walmart-owned Flipkart.

Amazon had launched Prime in India a little over two years ago at an introductory price of Rs. 499 (roughly $6.80), doubling the price to Rs. 999 (roughly $13.70) around a year ago. Apart from fast delivery, Prime subscribers in India now get access to Prime Video, Prime Reading, Amazon Music, and more, though an Audible subscription service will not be a part of Prime benefits, which is how it is other markets as well.

Though Amazon doesn't break down Prime membership numbers by country, the company did reveal in April this year that it had over 100 million Prime members worldwide.

To recall, Prime membership costs $119 (roughly Rs. 8,700) in the US, though subscribers in Amazon's home country get to enjoy wider benefits than their counterparts in India and other markets.

Nokia 6.1 Plus Hide Notch Option Returns With Android 9 Pie Update: Here's How to Enable it
Xbox One X Long-Term Review — Should You Buy One Now?