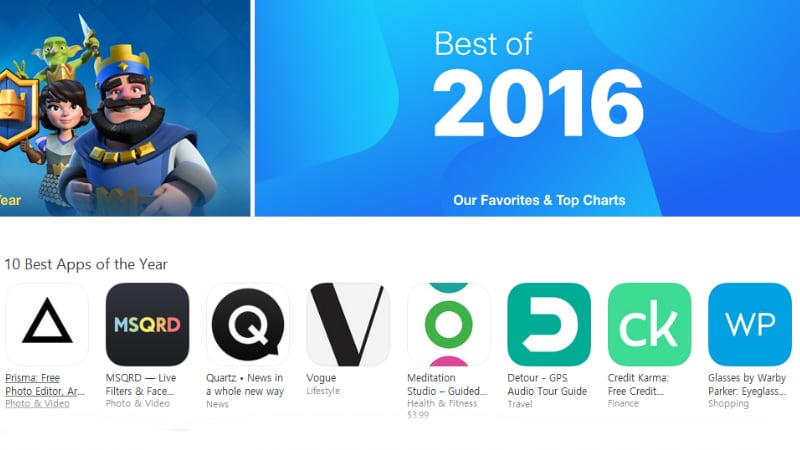 For those unaware, Prisma is the art filter app launched in June (Review) that gained popularity in a very short time because of its impressive machine learning technology. Clash Royale was introduced by the Clash of Clans makers, and is a real-time multiplayer card duelling game. Both these apps have made it to the top of the list, while the famous mask app MSQRD and swipe game app Reigns take the runner-up spots in the app and game charts.

The others on the '10 Best Apps of the Year' list include Fitso Fitness and Running app, Folioscope, Hyper, Tinycards, Memrise, Meditation Studio, Quartz, and WiFire. The '10 Best Games of the Year' list includes Chameleon Run, FIFA Mobile Football, Plants vs Zombies, BLUK, Rodeo Stampede, PKTBALL, Rubek, and Steppy Pants apps. The Top Paid app in 2016 was the DSLR Camera app, while the top free app was WhatsApp Messenger. The app that made the most amount of money is Clash of the Clans. There's a separate section for iPad apps and games as well, with different picks.

The iTunes and iBooks Stores (US) have listed the best music, TV shows, movies, and books lists as well. The 'Best Movies of 2016' list for India includes Sultan, Sairat, and Deadpool. The 'Best Songs of 2016' list includes Ae Dil Hai Mushkil's title song and Cheap Thrills from Sia.

Here are all the top app and game picks from Apple in different sections:

iPhone App and Game of the Year (US and India): Prisma and Clash Royale

iPad App and Game of the Year (US and India): Sketchbook Motion and Severed

Apple TV App and Game of the Year (US): Twitter and Renegade

Apple Watch App and Game of the Year (US): MySwimPro - Personal Swim Trainer and Field Day

Mac App and Game of the Year (US): Bear and Life Is Strange

Best Song (US): One Dance by Drake

Best Album (US): Views by Drake