Apple Music My Chill Mix Launched, a Weekly Playlist Tailored to Your Taste 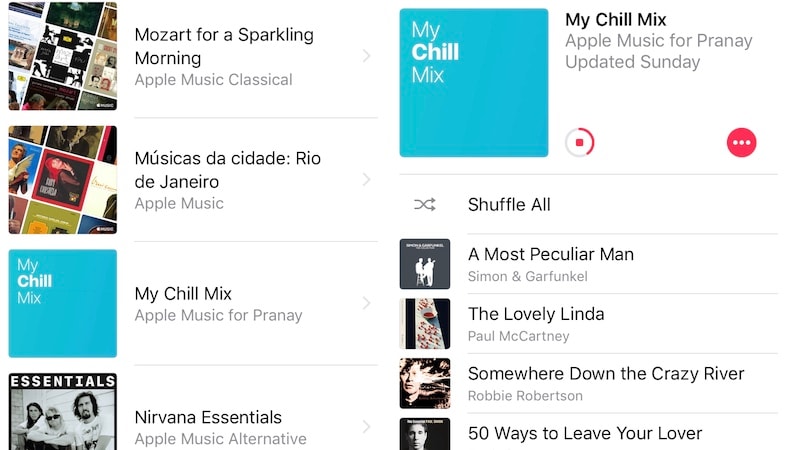 Apple Music is rolling out a new playlist called My Chill Mix, which contains a list of songs tailored to your taste. This playlist is created partly based on curation and partly on Apple Music algorithms. The music streaming service already has two similar playlists - My Favourites Mix and My New Music. The former collects your favourite songs while the latter recommends new music based on your taste. However, Apple Music's My Chill Mix contains tracks the service thinks you might like.

My Chill Mix has 25 songs, which roughly equates to 90 minutes of music. We've been listening to a lot of classic rock recently and our My Chill Mix currently has 24 songs we hadn't discovered and one that we've played quite often recently. This means that if you listen to a lot of Jazz, tracks from that genre will feature heavily in your My Chill Mix. If you're feeling creative, you could think that these are the tracks you want to listen to when you chill out.

TechCrunch claims that this playlist has currently been rolled out to a small group of test users and Apple Music will keep updating this playlist weekly for the test group. If you haven't received this yet, you'll have to wait until it's rolled out to everyone. Until then, perhaps you could save some money on your Apple Music subscription by opting for an annual plan.

Curation and playlists are why people stay with any music streaming service. While Apple Music is still a distant second to Spotify in terms of number of users, it's good to see the service adding cool playlists like this, especially since Spotify's strongest feature are its playlists.

Needless to say, if you suddenly decide to change your taste in music, My Chill Mix will reflect that and recommend different songs. This playlist will show up at the top of the For You tab on the Music app on iOS or on iTunes, alongside My New Music and My Favourites Music.

Pokemon Go Raid Battles: Everything You Need to Know
How Artificial Intelligence Is Taking on Ransomware