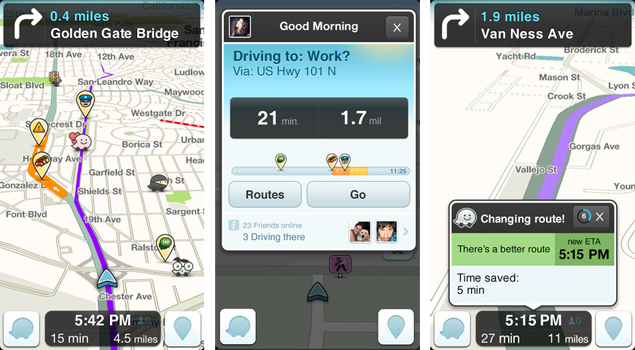 The Apple Maps fiasco is certainly haunting the Cupertino-based company as it continues to fix the directionless app. Fresh rumours suggest that the company is looking to acquire Waze, a social satellite navigation smartphone app. (Update: Not happening)

TechCrunch reports that while both Apple and Waze have declined to "comment on rumours", another source confirms that negotiations between the two companies are ongoing and may take a while. According to the report, Waze wants $750 million and Apple is willing to offer $400 million with another $100 million in incentives. The site notes that Waze had less than $1 million in revenues last year (primarily from ads).

The rumours of talks between the two companies comes just weeks after it was speculated that Apple may also be striking a deal to acquire or share data with social check-in service Foursquare.

Waze was one of the apps in Cook's recommendation of third-party Maps app alternatives. It is a crowd-sourced navigation app that lets users report accidents, road blockages, red light cameras and even nearby gas stations offering gas at cheaper prices. Greater use of the service also enables it to learn to route you depending on your daily commute patterns such as time and preferred routes. As of July 2012, Waze had 20 million users who'd driven a total of over 3.2 billion miles.

It is interesting to note that the Waze app already has Foursquare integration for point-of-interest and check-in data. TechCrunch notes that taking cues from Foursquare, Waze introduced Waze Ads, a location-guided ad platform for local business owners and big brands that want to attract the attention of nearby drivers.

The fact that Apple is making these efforts is proof enough that the company is seeking a permanent solution to its disappointing Maps app (Review). Apple's Maps app took quite a beating last year owing to its poor navigation capabilities that caused quite an outrage  amongst Apple users.

It was so bad that the Australian police warned travellers not to use Apple's troubled mapping software after several motorists were stuck in a snake-infested, desert corner of the country while using their phone for directions.

Apple CEO Tim Cook apologised for the "frustration" caused by new maps in a letter addressed to Apple's customers and also highlighted Google Maps and Nokia Maps mobile websites as viable alternatives. While Google was developing a maps app, Nokia released the HERE maps app for iOS users, which did seem a more trustworthy choice at the time.

Google finally came to the rescue with its maps application for iPhone users. People took to Google Maps for iPhone like fish takes to water with the app hitting the 10 million downloads mark in less than 48 hours. Not just that, reports indicated that iOS 6 adoption grew 29% in four days after Google released its Maps application.
Comments

EGoM on telecom likely to discuss spectrum auction details on Thursday
Indian enterprises will be cautious over technology spending in 2013: Reports