Apple Lists the 'Best of 2014' on iTunes With Top Apps, Music and More 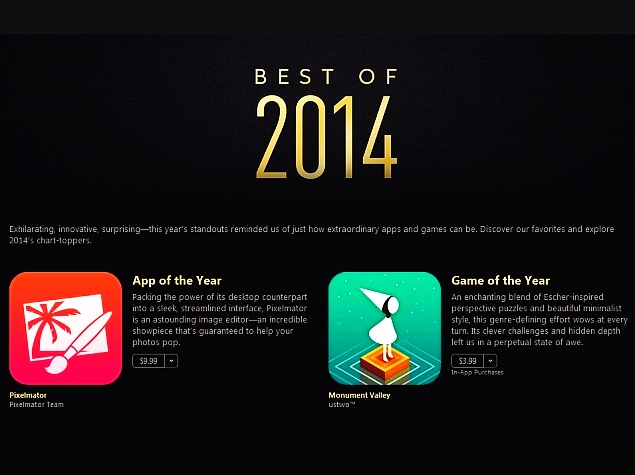 Following the launch of Google's Best Apps for 2014 section, Apple on Monday unveiled its Best of 2014 list, featuring apps, movies, music, TV shows, and books. Notably, each country has a different list, and we are listing the App Store India selection.

Apple also listed its 'favourite' apps and games in the Best Apps and Best Games featured sections, which included Hyperlapse from Instagram, Swiftkey Keyboard, and Camera Plus: Capture Remotely with Airsnap in the apps section, and Monyment Valley, World of Tanks Blitz, and Smash Hit under the games section.

In addition, the firm also listed the Top Paid, Top Free, and Top Grossing apps for the iPhone and iPad, with the iPhone list featuring Passcode for WhatsApp, WhatsApp Messenger, and Candy Crush Saga respectively, while the iPad list featured The Amazing Spider-Man 2, Skype for iPad, and Clash of Clans, respectively.

Apart from apps, Apple's Best of 2014 also listed the best music, movies, TV shows and books for the year. The full list under each category can be seen in the iTunes app.