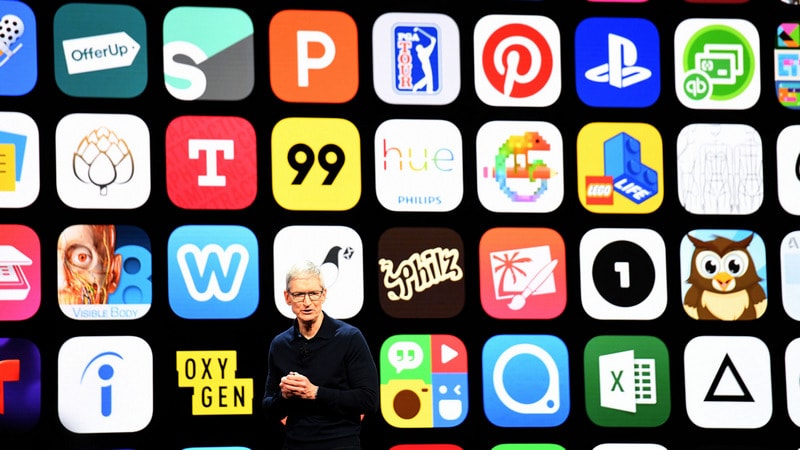 A backlash against the app stores of Apple and Google is gaining steam, with a growing number of companies saying the tech giants are collecting too high a "tax" for connecting consumers to developers' wares.

Netflix and video game makers Epic Games and Valve Corp. are among companies that have recently tried to usurp the app stores or complained about the cost of the tolls Apple and Google charge.

Grumbling about app store economics isn't new. But the number of complaints, combined with new ways of reaching users, regulatory scrutiny and competitive pressure are threatening to undermine what have become digital goldmines for Apple and Google.

"It feels like something bubbling up here," said Ben Schachter, an analyst at Macquarie. "The dollars are just getting so big. They just don't want to be paying Apple and Google billions."

Apple and Google launched their app stores in 2008, and they soon grew into powerful marketplaces that matched the creations of millions of independent developers with billions of smartphone users. In exchange, the companies take up to 30 percent of the money that consumers pay developers.

For most of the decade, the companies won praise for helping to build an app economy that's projected to grow to $157 billion (roughly Rs. 11 lakh crores) in 2022, from $82 billion last year. But more recently, smartphones and apps have become so important for reaching customers that these app stores have been criticised for taking too big a share of the spoils. Rather than supporting innovation, Apple and Google are being talked about as tax collectors inhibiting the flow of dollars between creators and consumers.

"They're very aggressive about making sure companies aren't trying to work around their billing," said Alex Austin, co-founder of mobile company Branch. "They have whole teams reviewing these flows to ensure they get their tax."

Last week, Schachter co-authored a report arguing that current app store fees were unsustainable. Apple and Google take 30 percent of subscription dollars and in-app purchases made on iPhones and Android phones using Google's app store (effectively all those outside China). About two years ago, the companies lowered that cut to 15 percent in some cases.

If app store commissions fell to a blended rate of 5 percent to 15 percent, that would knock up to 21 percent off Apple's earnings, before interest and tax, by fiscal 2020, Macquarie estimated. Google could lose up to 20 percent by the same measure, according to the brokerage firm. The technology giants are expected to earn more than $50 billion each, before interest and tax, in 2020, according to analyst forecast data compiled by Bloomberg.

This is particularly worrying for Apple investors, who are expecting the App Store to support the growth of the company's services business. Apple often highlights the financial success of its App Store on conference calls with analysts.

Alphabet Inc.'s Google is susceptible given its legal problems. A recent European Union antitrust ruling requires the company to stop automatically installing its app store on Android phones in Europe. (Google is fighting the charges.) That may compel more app makers to circumvent Google, luring in customers through the web or through partnerships with other companies. "Around the world, everyone is looking for ways to push back against American tech," Schachter said. "This feels like a natural way to go about it."

On Tuesday, video streaming company Netflix said it's testing a way to bypass Apple in-app subscriptions by sending users to its own website. Currently, Netflix users on iPads and iPhones can subscribe via the App Store's in-app-purchasing system. This makes subscribing simpler, but also gives Apple a 15 percent cut of those subscriptions. And as of May, Google Play billing for Netflix was unavailable to new or rejoining customers, according to Netflix's website.

On iPhones in the US, Netflix was the No. 1 entertainment app by consumer spend and the most downloaded entertainment app on the Google Play store over the last 90 days, according to App Annie, which tracks the industry.

The video game industry has also worked to avoid app store taxes this year. Valve's Steam, the largest distributor of video games for PCs, planned to release a free iPhone app that let gamers keep playing while away from their computers. Apple blocked the app. Soon after, the tech giant updated its app review guidelines to ban anything that looks like an app store within an app or gives users the ability to "browse, select, or purchase software not already owned or licensed by the user," according to Reuters.

"Middlemen distributors are no longer required," he added.

Fortnite has grossed $200 million on the Apple App Store since its release there in March, according to Sensor Tower, which tracks app purchases. Apple could make as much as $135 million in fees from the title, Sensor Tower estimates, while Google misses out on at least $50 million.

A Google spokeswoman declined to comment. In defense of the app store model, Apple and Google have highlighted their ability to filter out fake apps and malicious software, and to distribute apps widely. The companies handle identity and payment details, taking friction out of the sign-up process. Promotion inside their app stores can transform a company's fortunes overnight.

Indeed, only the most-popular online services can risk not being in Apple and Google's app stores. Skipping these powerful distribution channels is a "fool's errand" for most publishers, according to Danielle Levitas, a senior vice president at App Annie. And few other game developers are joining Epic. Electronic Arts and Glu Mobile are sticking with their current distribution system, which includes app stores.

According to Branch co-founder Austin, this just shows how broken the system is. Most developers want to use the app stores, but some are reluctant to pay Apple and Google, so they have to take their chances on the web, he said. His firm offers software tools that let companies identify paying subscribers before directing them to their apps.

"If you're a small up-and-coming company, you can't really sell subscriptions on the mobile web," he said. "By killing off the app store tax, it'd effectively reduce the last barrier for a large fraction of companies."'