Apple, Facebook Find Something to Praise China for Amid Internet Clamp 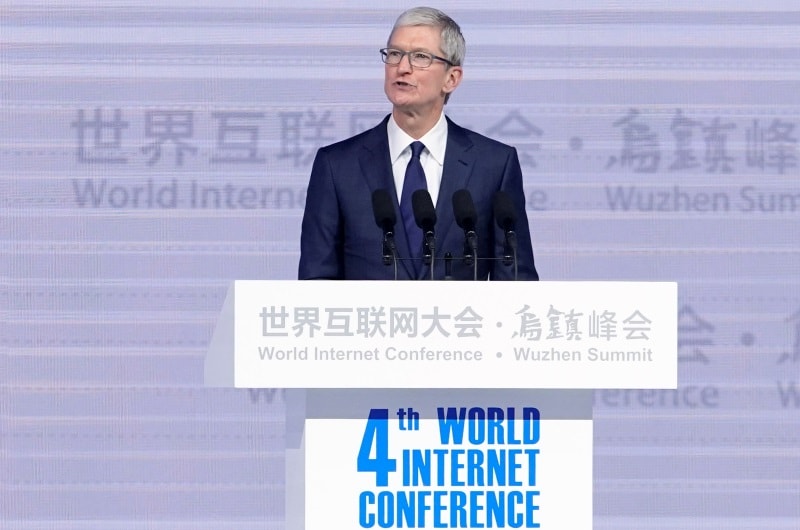 Top executives at Apple and Facebook managed to find something to praise Beijing for at an Internet conference in China this week, even as its Communist Party rulers ban Western social media and stamp on online dissent.

China's World Internet Conference attracted the heads of Google and Apple for the first time to hear China vow to open up its Internet - just as long as it can guard cyberspace in the same way it guards its borders.

The tacit endorsement of the event by top US tech executives comes as China introduces strict new rules on censorship and data storage, causing headaches for foreign tech firms permitted to do business in China and signalling that restrictions banning others are unlikely to be lifted any time soon.

"I'd compliment the Chinese government in terms of leadership on using data," Facebook Vice President Vaughan Smith said on Tuesday, citing government bodies such as the Cyberspace Administration of China (CAC) and Ministry of Industry and Information Technology (MIIT).

"The Chinese government, the CAC and MIIT are doing a fabulous job on that."

Facebook and Google aren't accessible in China behind the country's Great Firewall, along with major Western news outlets and social media sites, while Apple is subject to strict censorship. The US firm removed dozens of popular messaging and virtual private network (VPN) apps from its China App Store this year to comply with government requests.

"The theme of this conference, developing a digital economy for openness and shared benefits, is a vision we at Apple share," Apple Chief Executive Tim Cook said on Sunday. The audience cheered him twice - once when he reached the podium, and again when he bowed.

Perceived propaganda
China cracks down on any sign of online criticism of the government which it sees as a threat to social stability and one-party rule.

Some embassies, business groups and foreign firms steer clear of the highly choreographed internet event, analysts say, because of the perceived propaganda.

But diplomacy seemed to rule the day at the conference, held in the ancient scenic city of Wuzhen in the eastern province of Zhejiang, and neither Smith nor Cook addressed issues of censorship or cyber regulation.

Cook has made frequent trips to China over the past year, as the firm has looked to revive sales in the market and make a push into services that require working with local partners on data storage.

"Companies that have sent high-level delegations to this conference in Wuzhen in the past have often done so because there is some type of significant issue with their access to the market," said an industry source familiar with the event who declined to be identified due to the sensitivity of the matter.

At the event itself, conference guests were treated to a bubble of uncensored internet in hotels, including access to Google, Facebook and foreign news outlets with specialised codes handed out to guests.

In discussions on topics such as artificial intelligence and tech innovation, overseas executives generally skirted the topic of regulation, though it surfaced at times.

"More people come to Facebook than are in China," said Facebook's Smith at a talk on digital economy on Tuesday. "(But) I realise not everyone in the room is familiar with Facebook."

"(Foreign companies) are determined to come. Follow the rules and laws and if you're unhappy, leave," said Ma. "This is not a market (where) you can come and go."