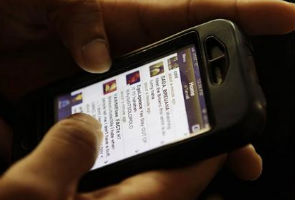 Tech startup BrandBounty on Monday sought to enlist smartphone users around the world in a "crowd-sourced" battle against knock-off goods and pirated digital content.

The creators of BrandBounty, which launched earlier this year, were at a TechCrunch Disrupt gathering of technology startups in San Francisco to show off an application they designed to transform "consumers into brand vigilantes."

The application makes a game of sorts out of exposing counterfeit goods.

People can score points and win prizes by using smartphones to submit pictures, descriptions or other "tips" about apparent knock-offs or piracy.

Brands sponsor contests or reward programs and get any resulting real-time intelligence about possible abuses in the market.

"The age-old problem with brand enforcement is a lack of eyes in the ground," said Jonathan Gonen, co-founder of the company born out of a Los Angeles-based accelerator called StartupMinds.

"With BrandBounty, we now have a simple, fun, and effective solution that turns smart consumers into brand watchdogs."

Counterfeiting and piracy cost the US economy an estimated $1.2 to $1.7 trillion dollars last year, according to Gonen.

A version of BrandBounty was available at the App Store for Apple gadgets with applications tailored for Android smartphones to be available in the coming months.