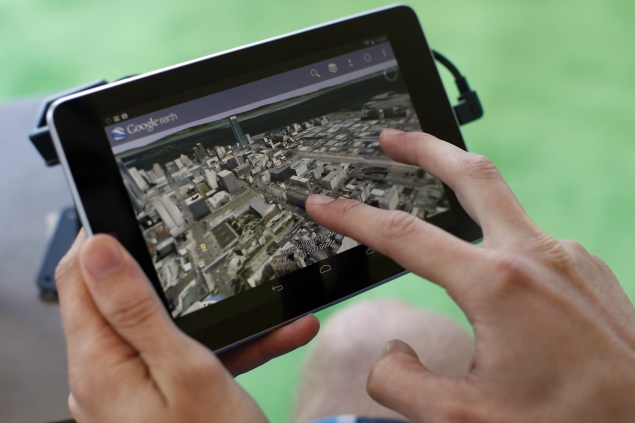 As online titans compete to deliver instant maps to smartphones, the Library of Congress in Washington is focusing attention on an antique "cosmology" printed in 1507 that serves as America's birth certificate.

The black-and-white map created by Martin Waldseemuller, a French cleric, was the first time the name America had appeared on any map.

Waldseemuller was prescient enough to show the Rocky Mountains and the Pacific Ocean at a time when no one else in Europe thought they were there.

The map, purchased a decade ago at a cost of $10 million, is the centerpiece of an exhibit at the Library of Congress running through June 22 that features a collection of artifacts from Waldseemuller and his colleagues.

It includes later maps that lose faith in Waldseemuller's vision of America. In a 1516 world map, the Americas are called "Terra Ultra Incognita" - a faraway unknown country.

Still, the Library of Congress had pursued Waldseemuller's mammoth map for more than a century.

It shows two continents across the ocean from Europe, with a skinny isthmus between them, an embryonic Florida peninsula, a western mountain range on the northern continent, and on the southern continent, a clearly lettered name: "America."

These maps are essential for the same reason a smartphone is better with satellite images of Earth, according to Ralph Ehrenberg, chief of the library's geography and map division: people want to know where they came from.

Waldseemuller's maps came at a time of geographic exploration, technological advance, societal ferment and expanding communication - a time much like our own, Ehrenberg said in an interview.

The new way of communication in 1507 was printing with mechanical type, he said, while "now we have Google Earth, which is a new way of looking at the world today."

This week, Google unveiled a map application that the search engine giant said will customize the known world for every user. This competes with Apple's iMap app and possibly with Facebook, which is creating a map app of its own, as reported by USA Today.

"We have a universal need to know where we are on the globe and where we are in the world; it's one of the things that transcends time and space," said John Hessler, a library map curator and Waldseemuller expert.

Out of the geographic comfort zone

That geographic comfort zone was unsettled in Waldseemuller's day. His best-known maps were made between 1492, when Christopher Columbus arrived at what he thought was Asia, and 1543, when astronomer Nicolaus Copernicus rocked the Renaissance with his theory that Earth revolved around the Sun, instead of the other way around.

Waldseemuller chose the name America to honor Florentine navigator Amerigo Vespucci, who explored the east coast of what is now known as South America. Because other known continents had feminine endings in Latin - Africa, Asia and Europa - he feminized Amerigo to America, said John Hessler, a curator in the library's geography and map division.

Also on this map, six years before Vasco de Balboa encountered it and 15 years after Columbus' seminal voyage, is an ocean east of Asia, now known as the Pacific.

So how did Waldseemuller know? He talked about new Portuguese sailing charts, and according to one theory, may have heard the Chinese claim that they had already discovered the Americas. Hessler discounted this.

"He knows it's a really radical geography," Hessler said. A map notation reassures viewers that his was an unusual and forward-looking world view.

Mariners, clerics, scholars and noble folk were the only map consumers in Waldseemuller's time, and maps were rare because they had to be laboriously printed. Waldseemuller wrote that there were 1,000 copies of his 1507 map; the Library of Congress has the only one known to survive.

"We're at a moment in time now where all of a sudden everything we know, everything we touch is being geo-enabled," Kerski said by telephone. Still, the role of maps is essentially unchanged.

While most of Earth's terrain has already been explored, Kerski said, mapping continues into such diverse areas as social networks and microbial activity in soil.

"We may not be exploring new lands per se, but we're still exploring and maps are still powerful, just as they always have been," the geographer said.