Amazon Prime Video app has finally arrived for Windows 10, and users can utilise it to stream and download content. 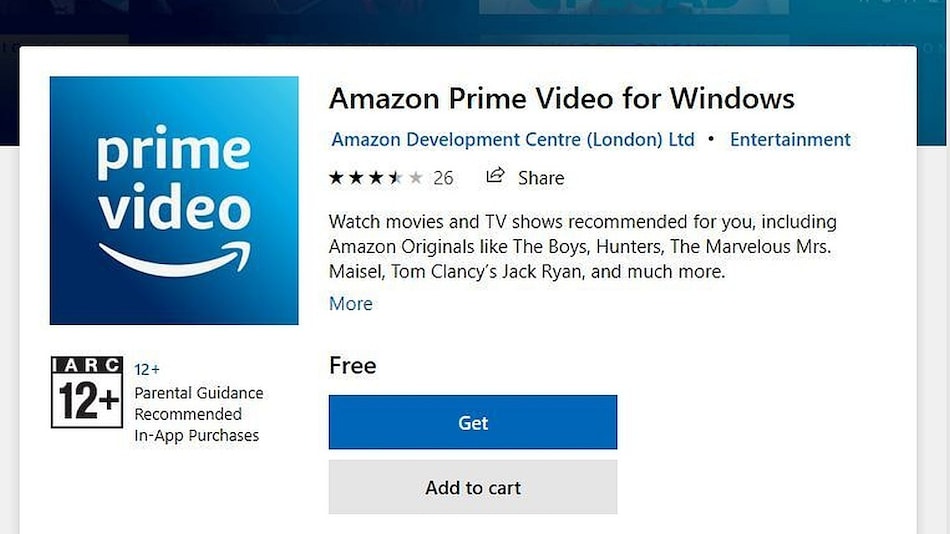 Amazon Prime Video is now available on Microsoft Store on Windows 10, allowing Indian subscribers to catch up on their favourite movies and TV shows on their desktop PCs, laptops as well as tablets. Like its Android or iOS variants, viewers can stream content online, or download content for offline viewing later on their device. On the new Windows 10 app, the streaming experience is similar to the current experience on the website, though there are some interface changes for navigation. The app can only be downloaded on devices with Windows 10.

While the Amazon Prime Video app is free to download from the Microsoft Store, the subscription costs run up to Rs. 129 per month. Users can also opt for a yearly subscription for Rs. 999. The subscription allows you to access Amazon Music for free and also offers access to unlimited free deliveries and exclusive deals on the Amazon shopping app.

The app has added some interface changes for better navigation on Windows 10 devices.

While Amazon suggests that the app can stream videos and download at up to 1080p HD, a test run by The Verge revealed that the app wasn't able to stream higher than 720p resolution on Windows 10. Videos can be downloaded at Good, Better and Best qualities. Some titles are listed as 4K UHD in the app as well.

Earlier this month, Prime Video introduced a new Watch Party feature, which allows subscribers to watch TV shows and movies with friends and family remotely. Accommodating up to 100 users in one group, the Watch Party feature will also have a built-in chat section where members of the group can have live conversations, complete with emojis. However, this feature is only rolled out for users in the US as of now. Plans of introducing the same in other regions are currently in pipeline.