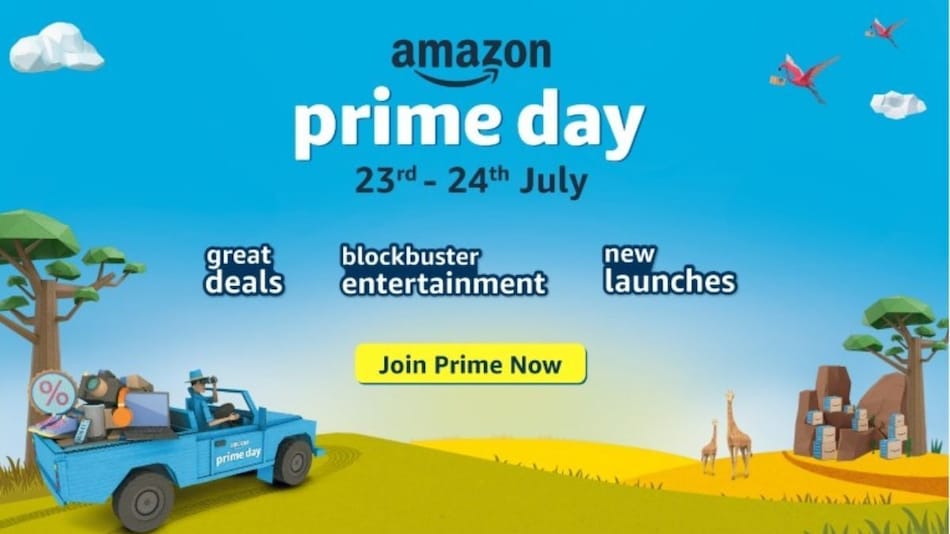 Amazon Prime Day sale 2022 will take place in India between July 23–24, the e-commerce giant announced on Wednesday. The Prime Day sale in the country will notably take place just days after the annual sale going live in the US, UK, and other major markets on July 12. As its name suggests, Prime Day is specifically meant for Amazon Prime customers. It takes place every year, with deals, discounts, and offers on a large number of products.

Deals, discounts, and offers during the Prime Day sale 2022 in India will kick off at 12am on July 23 and will run through July 24. Amazon said that the 48-hour sale event would bring over 30,000 new product launches from over 400 Indian and global brands including Samsung, Xiaomi, and Intel.

Customers using ICICI Bank and SBI cards and EMI transactions will get 10 percent discounts on various products during the sale.

Amazon will bring up to 55 percent discount on its Echo, Fire TV, and Kindle devices under the Prime Day sale in the country. There will also be deals across smartphones, consumer electronics, appliances, TVs, kitchen, daily essentials, and toys, among others. Further, the online marketplace is touted to bring deals on Amazon Basics Fire TV Edition TVs during the sale.

The Prime Day sale will also bring deals on Alexa inbuilt smartphones, smartwatches, speakers, TVs. The Amazon shopping app on Android as well as Alexa on Echo devices will be able to provide details about the two-day event by saying, "Alexa, what is Prime Day?"

In addition to the deals and discounts on various items, the Prime Day sale will bring rewards of up to Rs. 2,500 to customers paying for their bills and recharges and sending money using Amazon Pay. These rewards will be available until the beginning of the sale event.

The Prime Day event will additionally bring the release of two Indian Amazon Original series, namely Modern Love Hyderabad in Telugu on July 7 and Comicstaan Season 3 in Hindi on July 14. Prime members are also teased to get two additional "highly anticipated" titles that will be announced close to the Prime Day sale.

Amazon will also offer Prime members up to 50 percent discount on purchasing most add-on subscriptions among the 12 video streaming services that are bundled under Prime Video Channels.

Prime Reading users will get 18 e-books to read for free across fiction, history, investing, philosophy and children's books, including the bestseller One Indian Girl by Chetan Bhagat, Think Straight: Change your thoughts, change your life, Chanakya in the Classroom, Irrfan Khan: The Man, The Dreamer, The Star, among others.

Last month, Amazon announced that the Prime Day sale will be held between July 12–13 for Prime members in Austria, Australia, Belgium, Brazil, Canada, China, France, Germany, Italy, Japan, Luxembourg, Mexico, the Netherlands, Portugal, Singapore, Spain, the UK, and the US. The online sale will also go live for the first time in Poland and Sweden — alongside the other major countries.

Amazon at the time also announced that its Prime Day events will be held in India, Saudi Arabia, and the United Arab Emirates later this summer. The e-commerce giant is also hosting the loyalty sale in Egypt for the first time.

Last year, the Prime Day sale was conducted in India between July 26–27.