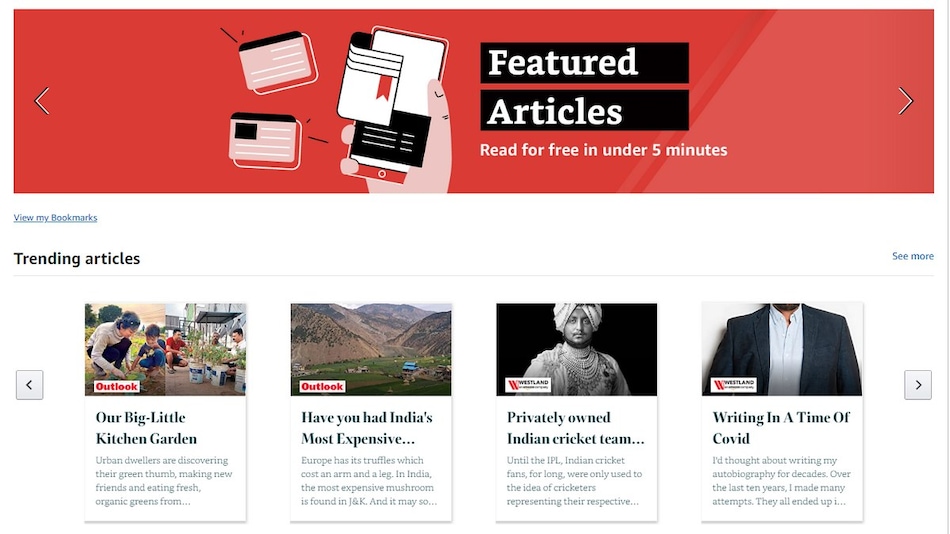 Amazon has added a ‘Featured Articles' section where viewers can read a selection of articles for free. The new section was silently added to the website and mobile app. It includes categories such as exclusive, sports, auto, entertainment, politics, and more. It sources the articles from various publications and brings them together in one place. Some of these articles are exclusively available on Amazon, as per the page. According to a report, some Kindle users are being notified of these featured articles.

Featured Articles section is hard to locate while browsing the Amazon website or the app but can be found by manually searching “featured articles.” The banner says the articles have a reading time of under five minutes but there are some articles that claim reading times of over the specified limit. The categories listed here include exclusive articles, entertainment, politics and governance, sports, business and finance, health and fitness, society and lifestyle, books, food, fiction, current affairs, travel, and auto.

These articles have been sourced from Outlook, Westland, Harper Collins, Hachette India, and others. It also includes articles by Amazon Prime Video.

As per a report by TechCrunch, some Kindle users are getting notifications of these featured articles. Since the Featured Articles section isn't easily visible on the website or the app, it could be that Amazon is testing it at present before announcing it publicly. The report quotes an Amazon spokesperson, “We remain focussed on creating new and engaging experiences for our customers and as part of this endeavour, we have been testing a new service that brings articles on different topics like current affairs, books, business, entertainment, sports and lifestyle amongst others for readers.”