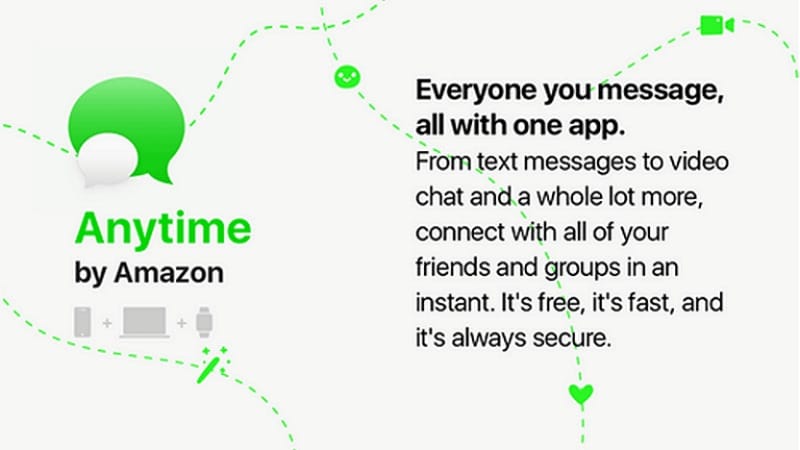 Earlier this year, Amazon launched Chime, its communication service designed for business customers. Now, the company is reportedly planning to introduce a new messaging app, called Anytime, meant specifically for end consumers. Anytime is said to be a one-stop messaging service that provides an option of communicating through text messages as well as via video chats.

As per a report by AFTVnews, Amazon has been surveying customers to get an idea about the features that are most important to them for its messaging service. The leaked image, provided by AFTVnews, indicates that the upcoming Anytime messaging app from Amazon will allow users to keep their chats private and encrypt important messages.

The users will apparently be able to connect with their friends by simply searching them for their names and without the need of phone numbers. Apart from chat messages, users will be able to place video and voice calls, just like they can already do on WhatsApp.

Users will reportedly be able to chat seamlessly with Amazon's Anytime as the messages will be in sync across platforms. This means you can move from desktop to mobile or even from iOS to Android but you will still be able to get hold of your previous messages from conversations. In the image, Amazon has referred to @mentions feature that allows faster photo sharing and video chat while group messaging.

According to the report, Amazon's Anytime messaging service will also allow users to play games with their friends in groups on the platform. Users can expect to see some other features like GIF support, emojis, stickers, filters, and customisation options etc., which are offered by some other messaging platforms. With Anytime, users will also be able to chat with businesses to make reservations, check on their orders, and even shop, as per the leaked promotional image.

Amazon recently introduced calling and messaging service for its Alexa service and it seems plausible that the company would develop a separate app to branch out the messaging capabilities of Alexa, as pointed out by the report. While there is no word on when the app is expected to launch, one of the customers who got surveyed seemingly implied that Amazon's Anytime was a "ready product," as per the report.