Amazon Alexa Gets Amitabh Bachchan’s Voice in India, for a Price

You need to pay Rs. 149 to get the celebrity voice for one year. 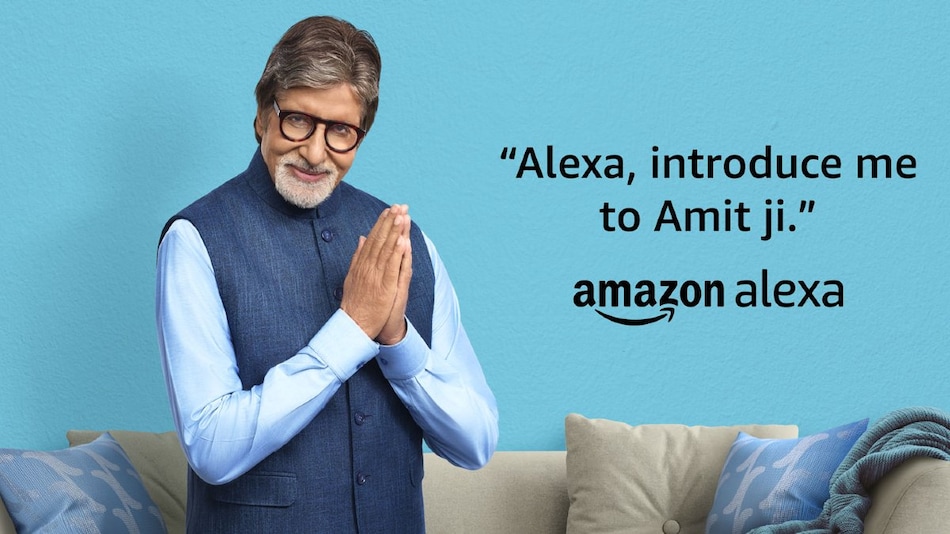 Alexa can now speak in Amitabh Bachchan’s voice in India

You can now speak with Amitabh Bachchan on Alexa. Amazon on Thursday launched the voice of the 78-year-old Bollywood star as a part of its efforts to amuse existing users and attract new consumers to use its voice assistant over Google Assistant and Apple's Siri. With the new launch, the US tech giant has also brought its celebrity voice feature to India. The feature initially arrived in the US with the voice of American actor and producer Samuel L. Jackson in 2019.

How to use Amitabh Bachchan's voice on Alexa

Amazon has made Amitabh Bachchan's voice available on Alexa at an introductory price of Rs. 149 (MRP Rs. 299) for one year. You need to say, “Alexa, introduce me to Amitabh Bachchan” to purchase the celebrity voice. You can also get it directly from the Amazon site. Once the payment is confirmed, you will be able to start interacting with the actor's voice. You can also interact with Bachchan's voice using the wake word “Amit ji” by asking, “Alexa, enable Amit ji wake word.” It will work alongside the default “Alexa” wake word. This means that you can call the voice assistant by using the wake word "Alexa" and at the same time use "Amit ji" to speak with the actor's voice.

Formally announced in September last year, Amazon worked on enabling Bachchan's voice on Alexa for the last few months. The experience is aimed to please his fans and attract new users to the voice assistant.

You can access Bachchan's voice to listen to the stories from his life, a selection of poems by his father and popular Indian poet Harivansh Rai Bachchan, tongue twisters, motivational quotes, and even his favourite songs. Amazon will also bring Bachchan's signature style when asked for music, alarms, and weather updates.

For instance, you can ask, “Amit ji, play songs from Kabhi Kabhi” or “Amit ji, Sholay ke gaane bajaiye” to listen to some old music tracks from the actor's movies. You can also say, “Amit ji, tell me a funny story” to hear some behind-the-scenes information from the actor.

You can also explore more about what you can do with the new experience by saying, “Amit ji, what can you do?” Further, the celebrity voice will give answers in Hindi and English languages both — just like how Bachchan communicates in the public.

Challenges in bringing the Indian celebrity voice
Amazon started its work on the Indian celebrity voice by partnering with Bachchan last year — amid the COVID-19 pandemic and national lockdowns. Due to the restrictions, the different engineering teams at the company worked remotely from various locations, including Boston, Poland, Seattle, and the UK, Puneesh Kumar, Country Leader for Alexa, Amazon India, told Gadgets 360 on a virtual call.

Instead of going for a traditional model, Amazon engineers used transfer learning to build the celebrity voice.

“In transfer learning, you teach the models to learn skills in one domain,” said Manoj Sindhwani, Vice President of Alexa Speech, Amazon. “And then you take that learning and start transferring it to a second domain. So we started by creating a wake word model that had a medium-sized vocabulary.”

The engineers took some references from Jackson's voice to build the ground. However, Sindhwani told Gadgets 360 that to capture the richness of Bachchan's voice, the way he pronounces certain things, the way he speaks, the teams used distinct techniques with neural network text-to-speech (neural TTS).

“We've put a lot of energy into making sure that the voice (Amitabh Bachchan) reflects his persona, his style, and his authentic self. After all, it's a voice that everybody recognises, and if there were any flaws, anyone would recognise it. It's not like my voice that nobody knows and even if there are certain flaws, people will not notice,” he said.

This was also the first time when Amazon has brought a two-word wake word to Alexa in India. The company used a multiple simultaneous wake word technology along with a multi-target learning to enable its voice assistant to use the two-word wake word alongside detecting the regular one-word "Alexa" wake word.

“It would have been far easier for us to go and make it like ‘Mr. Bachchan', ‘Bachchan ji', or ‘Amitabh ji', said Sindhwani. “Phonetically, those are much easier, but we said, no, we want something different. How would an average person want to interact with him? We quickly thought, Amit ji, that's the way.”

It is important to note that you won't get Bachchan's voice for all your queries. General information-requiring queries such as arithmetic problems and geographical questions will still be answered in Alexa's own voice. It was intentional as the gist of bringing celebrity voices to Alexa is to make people interact with celebrities and not to replace the original voice.

“What we have heard from millions of customers all over the world, not just in India, is that they love Alexa's voice, they find it very soothing,” said Kumar. “They love the personality they like interacting with Alexa, We had a lot of positive feedback on things that customers already liked doing with Alexa. The piece that we were hearing from customers in the US, as well as in India, is they would love to be able to interact with a celebrity or famous personality, who brings in a distinct personality or a style.”

Initially, Bachchan's voice is limited to Echo devices. Users on the Amazon shopping app on Android devices will also be able to interact with the new voice but only in English in the initial stage.

Kumar told Gadgets 360 that Amazon decided to keep the rollout limited at launch as it requires installation of multi-simultaneous wake words, and the company has more control over first party devices.

“We want all of Alexa's capabilities, all of the features to be available over a multitude of devices, including third party products and services. It's a matter of time, as we roll out, get the feedback and then expand to other areas as well,” he said.

“Customers today would pay much more money when they're buying a movie ticket to watch a two-hour movie of the famous celebrity,” said Kumar of Amazon. “That interaction is a one way interaction. It's not a two way interaction. And so when you start thinking about the convenience and the delight of having a celebrity voice available for you to initiate a conversation, we felt that it is very innovative. That is very delightful.”

Unlike Bachchan who has fans not just in India but also in some other parts of the world, his voice on Alexa is currently exclusive to Indian users. However, if you are not in the country, you can use the voice by switching your Alexa's settings to India. Kumar also told Gadgets 360 that over time, the company would try to bring it to more and more customers worldwide as well.

The earlier moves are helping Amazon to take Alexa to new levels. There are also 30,000 skills, including over 1,000 skills particularly in Hindi to make the voice assistant a more useful artificial intelligence (AI) product. Many of these skills are coming from third-party developers. Amazon told Gadgets 360 that there are 100,000 developers from India that are building new experiences for Alexa globally.

Having said that, by enabling the new celebrity voice feature, Amazon is indeed planning to get more data from users that it would use to enhance Alexa. Separately, Sindhwani from the Alexa Speech team told Gadgets 360 that the company has made a “lot of improvements in wake word detection.” He added that that the company in the last year had also improved Alexa's speech recognition by about 50 percent and language understanding by 30 percent.

“We also made a lot of improvements in wake word detection,” he said.

However, market experts don't think that the celebrity voice feature would help Alexa to make any further success in the ever-growing market of voice assistants.

“Being able to use certain celebrity voices is a nice bonus for fans of those celebrities and can help give Alexa more personality,” said Ross Rubin, Founder and Principal Analyst at Reticle Research that analyses technology's adoption and usage by consumers around the world. “In the larger sense, though, it won't be as significant a driver of growth for the agent."

"I would see things such as Amazon partnering with other companies such as hotel chains, retailers, and other businesses to use Alexa as a significant way to boost adoption, as well as making tighter ties between Alexa and apps, such as the Alexa for Apps improvements it recently launched at Alexa Live,” he added.