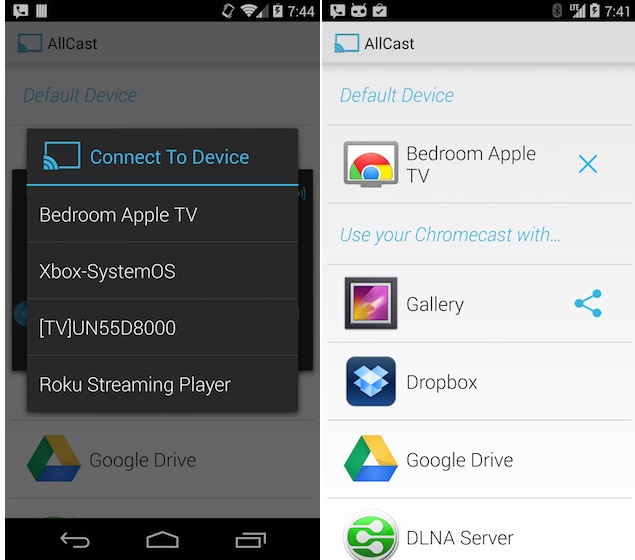 It becomes a little difficult to wirelessly stream content from Android devices to your television unless you have a device that supports a streaming standard such as DLNA, and you are using a smart TV or an additional device attached to a regular TV.

Popular media players like Roku and Apple TV, or gaming consoles like the Xbox, don't gel well with Android devices.

An app, called AllCast, intends to overcome this limitation, and offer an easy way to stream local content from Android devices to media players like Roku, Apple TV, Xbox 360 and Xbox One consoles, Samsung Smart TVs, and other DLNA-enabled devices.

The app, which is still in beta, has been developed by Koushik Dutta, and can be downloaded by joining the beta program.

Dutta had earlier developed an app with the same AllCast moniker, for use with the Chromecast, allowing users to stream their own local content to their TVs from their Android device via Chromecast. An update pushed by Google had broken support for AllCast.

For the uninitiated, Google's Chromecast is a small stick roughly the same size as a thumb drive that can be plugged into an HDMI port on flat-panel TVs. It brings services like Netflix, Google's YouTube site and other Internet content from Google Play to the TV through smartphones, tablets and personal computers to beam Internet content to TVs. However, unlike the Apple TV, it doesn't let users beam local content to TVs due to Google's copyright worries, and connects to an Internet server for receiving content.

It's worth pointing out that the AllCast app only allows you to stream local content from the device and doesn't mirror the screen of the device.

Recent versions of Android come with native support for wireless screen mirroring through Miracast. However, you need an additional device or a high-end television that supports the standard to utilise the feature.

The Apple TV, Apple's media player officially supports mirroring and streaming of content from Apple devices through the AirPlay standard. It would be interesting to see it streaming content from Android devices.
Comments