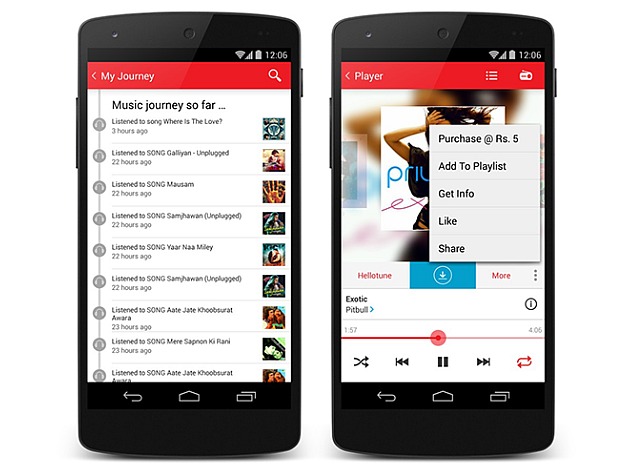 Bharti Airtel on Tuesday has launched a new music streaming service with an OTT app that is carrier agnostic. Called Wynk Music, it is currently only available for Android and iOS, and offers an 'expert curated' library of 1.7 million regional and International songs across 8 languages (English, Hindi, Punjabi, Bhojpuri, Tamil, Telugu, Kannada and Bengali).

Competing directly with Gaana and Saavn, Airtel's free Wynk Music app is also ad-free. Two subscriptions are available - Wynk Plus and Wynk Freedom. The company says users without a subscription can stream songs of their choice online, and tune into ad-free Internet radio. Customers will also be able to set any of the songs as their 'hello tune', purchase songs and albums (as mp3), and view lyrics.

Wynk Plus users have to pay Rs. 99 a month on Android, or Rs. 60 a month on iOS, to avail 'unlimited' in-app song downloads and the ability to play music offline in addition to the above free features. Data charges for downloading and streaming will be applicable.

The Wynk Freedom subscription, meant only for Airtel customers in 3G circles using Android devices offering 'unlimited' streaming and download of music without incurring additional data charges. It's been priced at Rs. 129 a month, with a Rs. 29 special introductory price.

The company notes the Wynk Freedom subscription will be rolled out to iOS users later, saying that Apple does pricing differently and the two are working together to see what's feasible.

Notably, the company on the FAQ section of the Wynk Music site details a fair usage policy (FUP) that is similar to ones it applies on its mobile Internet and broadband subscribers. Users without a Wynk subscription are only allowed to stream up to 100 songs a month, after which they will be prompted to buy a Wynk Freedom subscription.

The company, explaining the need for a fair usage policy on Wynk Music (what it is calling an 'unlimited' streaming service), elaborates on the same page, "A very small number of customers use an excessive amount of network bandwidth, to the extent that it can impact the experience of others. The Fair Usage Policy (FUP) is designed to provide the best of streaming & download experience to all our customers."

Airtel customers can pay for all purchases on the app using their Airtel balance or bill. Other customers have the option to pay using online banking. The Wynk Music app is currently available to download from the App Store and Google Play.

The company further touts Wynk Music as the only music app with a 'vernacular UI', offering a Hindi interface option. Also available are expert curated playlists categorised by moods, artists or genres. Airtel says users can choose between three preset sound qualities depending on their needs, with high@128kbps, medium@64kbps, and regular@32kbps. Streaming and downloads are accessible both via mobile Internet and Wi-Fi connectivity.

Speaking at the launch, Srinivasan Gopalan, Director - Consumer Business, Bharti Airtel said, "With the proliferation of smartphones in the country, mobile phones have emerged as the most preferred platform when it comes to experiencing music on the go and accounts for almost 85-90 percent of total digital consumption. We are introducing this segment to Wynk - an innovative platform that blends technology and music and present a whole new dimension to music uptake in the country. Given our legacy with music and our strong smartphone network, we are certain that Wynk will offer the best-in-class user experience and become one of the most sought after app."
Comments