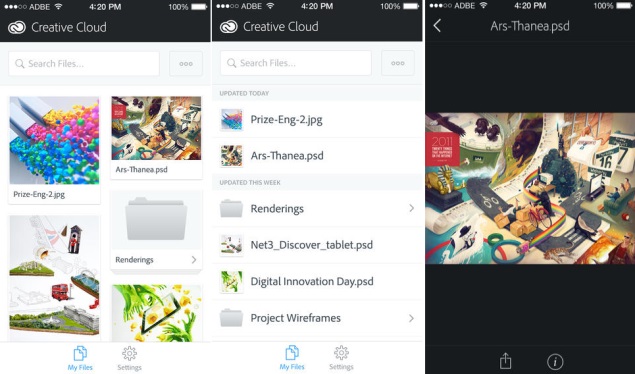 Adobe has announced a big update to its Creative Cloud suite of applications, with all 14 CC desktop apps getting a refresh as part of the 2014 Creative Cloud release. The company has also released new hardware, mobile apps, and a brand new SDK for third-party developers looking to integrate their Adobe's Creative Cloud into their applications.

The 2014 Creative Cloud also comes with a bunch of performance boasts, including the improved Mercury Graphics Engine that comes with up to 3x faster image upsampling. There's good news for Mac users in the form of Open CL support, while select Windows users with an Adobe-certified Nvidia graphics card will experience 5-10x improved vector graphics rendering, thanks to the use of GPU acceleration techniques.

Adobe also announced the availability of hardware called Adobe Ink, a digital pen, and Adobe Slide, a new digital ruler. The hardware will ship in the US first, with plans to release in India and other countries later in the year.

Adobe has also launched new free apps for iPad -Adobe Sketch, Adobe Line and Adobe Photoshop Mix - while Lightroom, that was earlier available for tablets, is now available for mobiles as well. A new Creative Cloud app has also been released for iPad and iPhone that lets you access and manage your content from anywhere.

Interestingly, Adobe has also announced the launch of a new SDK that third-party developers can use to integrate Creative Cloud with their apps. With the SDK, which will initially launch as a beta, apps can get read-only access to assets stored in users' Creative profile. In the future, Adobe may allow third-party apps to also save assets back to the cloud.

"The industry is dealing with a rapid pace of change, an explosion of mobile, and working in a super-connected world," said Umang Bedi, Managing Director South Asia, Adobe. "The 2014 release of Creative Cloud enables us to deliver the magic that customers expect from Adobe."

The company has also announced a new Creative Cloud Photograph Plan for Rs. 499 per month (plus taxes). This plan offers access to Photoshop on the desktop and iPad (Photoshop Mix), Lightroom on the desktop, tablets and mobiles, as well as Web.

As usual, updates to CC desktop tools are immediately available for download by Creative Cloud members as part of their membership at no additional cost. The new mobile apps are free to download for everyone.

HTC Claims It Sold 50,000 Units of the One (E8) in Just 15 Minutes
Icann Says the Push for Government Control Is 'Dead'