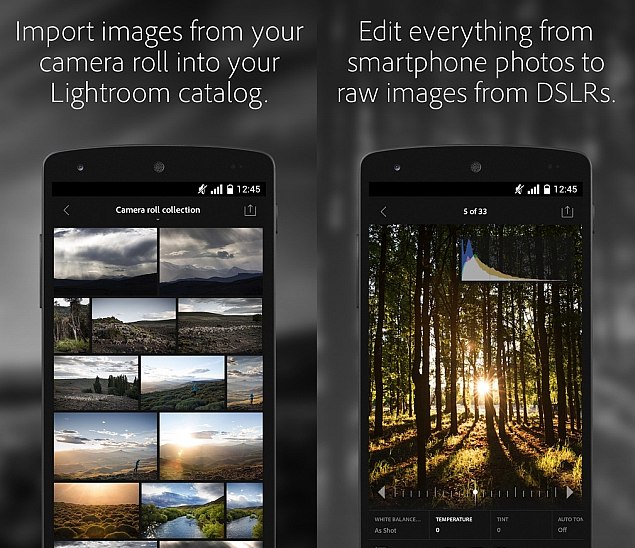 Announced last week, the Adobe Lightroom Mobile app lets users send a set of images from the software's PC version to their Lightroom Mobile app as a part of the sync feature, edit those images (or those from the smartphone's gallery), and share them across various social networking websites. The firm has added that, "Any changes you make in Lightroom Mobile will be automatically synced and updated back to the Lightroom catalog on your desktop." The sync process uses Adobe's Creative Cloud service.

However, to fully make use of the app the Adobe Lightroom Mobile, one would need to be a Creative Cloud or Photoshop Photography Plan subscriber. The company has mentioned that a 30-day trial will be present for Android app users. While a desktop version of Lightroom (latest version of Lightroom 5) will be needed for most of the important work and detailed editing, Android users can work with the basic tools like exposure, highlights, shadows, composure and others within the app. More details can be found on Adobe's page for the new app for Android.

As noted by Engadget, the Lightroom desktop and iOS apps' commenting system is absent from the Android version, but might arrive as a future update. Users can however still like, flag and reject images as needed. The Android app still doesn't have a tablet version, which the firm says it intends to bring in future updates.

The Adobe Lightroom Mobile app's minimum requirements include a device powered by a quad-core ARMv7 architecture-based CPU clocked at 1.7GHz, 1GB of RAM and 8GB of inbuilt storage. The app will be compatible with devices running Android Jelly Bean and later OS versions. The app is sized at 19MB and is available to download from Google Play.