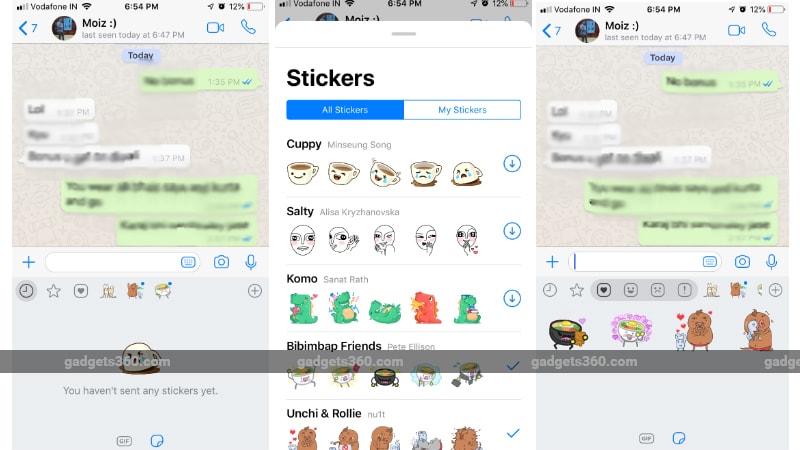 From WhatsApp Payments to Stickers, WhatsApp launched some really interesting features in 2018

2018 has been an eventful year for WhatsApp. From the introduction of plethora of interesting and useful features to dealing with the spread of fake and bogus information, there was no dull day for WhatsApp executives in the country this year. With over 220 million users, India is currently the biggest market globally for the Facebook-owned chat app and it is no wonder that we saw the company try so hard to bring features exclusive to the country, like WhatsApp Payments, or work day and night to attempt and solve the increasing problem of fake news on WhatsApp.

Here's a rundown of some of the biggest features that WhatsApp introduced in 2018 to entice its massive user base.

1. Group video and voice calling
WhatsApp group calling is one of the biggest new features that was introduced in the chat app in 2018. After being tested for over a month, the feature made its debut in August. The company further improved the group calling experience in December by making it easier to add participants to a call. The WhatsApp group calling currently supports just up to four people.

2. WhatsApp Stickers
Stickers have been a mainstay of all major Asian chat apps for years now, and WhatsApp was a bit of a late-entrant in this space. In fact, Facebook's own Messenger got support for stickers before WhatsApp. Still, after months of speculation and anticipation, WhatsApp finally added stickers to its platform in October. The app offers handful of default stickers to the users and more can be downloaded from the company's Stickers Store.

3. WhatsApp Payments
As mentioned earlier, WhatsApp Payments was easily the company's biggest new feature for the Indian users. Despite getting a bumper launch of the beta version back in February, the feature is still stuck in beta because of the regulatory hurdles. The company is still waiting for an official approval from Reserve Bank of India to open the payments to all. Based on the United Payments Interface (UPI), the WhatsApp Payments allow the users to send, request, and transfer money.

4. Picture-in-Picture support
The Picture-in-Picture (PiP) feature allows the WhatsApp users to continue watching Facebook, Instagram, or YouTube videos in a small window while browsing the other parts of the application. The iPhone users were the first to get the feature in January this year with the Android users joining the mix in December. Apart from the three video sharing services mentioned earlier, the PiP is not available for any other video sharing services or even the videos shared natively in the app.

5. Group chats
WhatsApp Groups received a number of new features this year, including more controls for admins and creators. In addition to names, the groups can now also have descriptions. Further, WhatsApp has started allowing group creators to easily dismiss group admins using the “Dismiss As Admin” option. The creators can also restrict admins from changing group icon, subject or description.

6. Media visibility
The chat app in June started letting the Android users define whether they want media from certain chats or groups to appear in their media library. The feature was originally introduced in WhatsApp beta version 2.18.194 and removed in later versions, only to reappear later.

7. Forwarding restrictions and labelled forwarded messages
To tackle the spread of fake news and bogus messages on the platform, WhatsApp put up strict restrictions on message forwarding. The company also announced in July that it will remove the quick forward button from media messages. Additionally, the app has started showing a “Forwarded” label next of any messages that have been forwarded by other users to you. It is unclear how much of an impact these changes have had on the spread of misinformation.

8. WhatsApp data download
To meet EU's data privacy guidelines, WhatsApp started offering the users the ability to download all the data that the platform has collected on them. This data can be downloaded by going to Settings > Account > Request Account Info. Once done, you will be taken to a page where you have to click Request Report. The feature was launched in May.

After a long wait, Reliance's Jio Phone and Jio Phone 2 received the support for WhatsApp in September 2018. Given that Jio phones run on KaiOS, the company had to build the app from scratch for the platform but considering the popularity of the two phones, it is most likely worth the time spent for the company.

Google Says Gboard for Android Now Supports Over 500 Language Varieties, Google Photos Expands Private Album Limit to 20,000
Realme U1 to Go on Sale With Up to Rs. 1,500 Instant Discount via Amazon India