What Happens When Facial Recognition Tools Are Available to Everyone 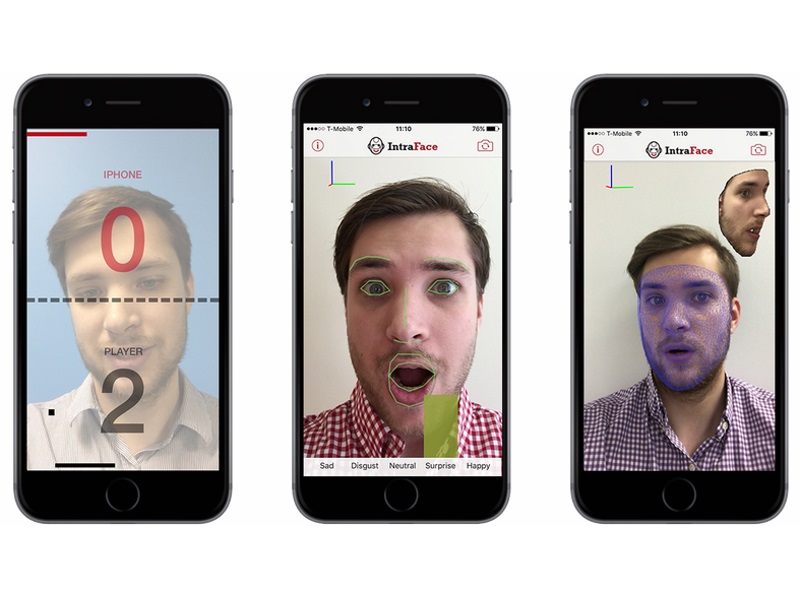 The problem with most of today's facial-recognition software, however, is that it's computationally very intensive and difficult to use for more than just matching simple photos. If you could speed up the process of recognizing faces, add the ability to track facial features and make it so easy that it could be used as a smartphone app by anyone - then it might open up important new opportunities.

That's the goal of AI researchers at Carnegie Mellon University's Human Sensing Laboratory. Starting in February, they will make available their facial-image-analysis software to fellow researchers. The software, known as IntraFace, is fast and efficient enough that it can be installed as a smartphone app.

For now, to give a preview of what to expect, the researchers have made available free demonstration smartphone apps, which show how IntraFace can identify facial features and detect emotions. These can be downloaded from the website for the Human Sensing Laboratory, from Apple's App Store or from Google Play.

The project's lead researcher, Fernando De la Torre, associate research professor in the robotics department of Carnegie Mellon University, said he is already starting to see enormous interest within the AI field for IntraFace. "Now it's time to develop new applications for this technology. We have a few of our own, but we believe there are lots of people who may have even better ideas once they get their hands on it."

Duke University medical researchers, for example, are using IntraFace as part of an advanced tool to screen for autism. Doctors and clinicians might be able to monitor or detect a number of pathologies, including depression or anxiety, by checking out facial expressions of patients.

One everyday use for facial-recognition analysis might be vehicles that can recognize a distracted driver behind the wheel. In the demo video for IntraFace, there's the example of a father behind the wheel of a vehicle who turns around to comfort a screaming toddler in a car seat for a split second before being warned that he's veered off the road.

And sales and marketing teams are going to love this once the technology becomes commercially available: Imagine being able to evaluate what people think about your products just by reading their faces. The Carnegie Mellon researchers refer to this as "audience reaction measurement," and they see potential applications being used by public speakers to gauge how well they're winning over the crowd. But you could also imagine biometric trackers on billboards, checking out how the crowd is responding to an advertisement.

You could also envision IntraFace being used by dating apps once the technology becomes commercially available. Not sure whether you should approach the target of your amorous intentions? Use the IntraFace app to read the facial features of that handsome guy or beautiful girl and get the green light to proceed.

IntraFace is the result of a decade of work by De la Torre and his colleagues, including Jeffrey Cohn, a professor of psychology and psychiatry at the University of Pittsburgh and an adjunct professor in CMU's Robotics Institute. The researchers used machine learning techniques to train the software to recognize and track facial features. The researchers then created an algorithm that can take this generalized understanding of the face and personalize it for an individual, enabling expression analysis.

However, as with any potentially breakthrough technology, there's the flip side. Making facial recognition software widely available is surely going to attract the attention of consumer privacy advocates - it's one thing if Facebook uses it to tag you or a friend in a photo; it's quite another if a camera captures your expressions when you're not expecting it. Just remember the commentary last year around the "creepy" aspects of DeepFace, Facebook's facial-recognition software.

There might be national security implications, as well - being able to recognize the face of a terrorist in a crowd, for example, has always been one potential application for facial-tracking software. That type of technology, which once seemed to be just science fiction when it appeared in the first "Terminator" film, is already available to law enforcement agencies. The FBI, for example, uses facial-recognition software to match names to faces in a crowd, based on information in a biometric database.

On the whole, though, the positives outweigh the negatives when it comes to automated facial-expression analysis. For nearly 20 years, AI researchers have been working on it. Now it looks as if it may be coming to a smartphone near you in 2016.