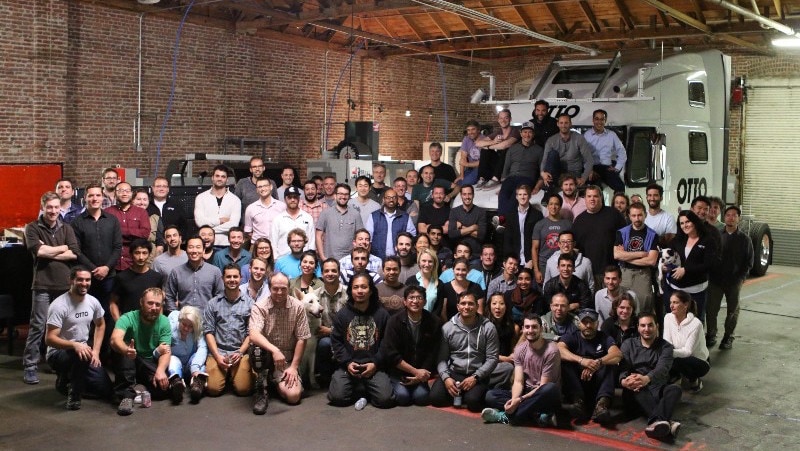 With its recent acquisition of self-driving truck startup Otto, Uber is plotting its entry into the long-haul trucking business, aiming to establish itself as a freight hauler and a technology partner for the industry.

Otto plans to expand its fleet of trucks from six to about 15 and is forging partnerships with independent truckers, Otto co-founder Lior Ron told Reuters in an interview. Starting next year, Otto-branded trucks and others equipped with Otto technology will begin hauling freight bound for warehouses and stores, he said.

Uber has already started pitching services to shippers, truck fleets and independent drivers, and the services go well beyond Otto's initially stated goal of outfitting trucks with self-driving technology. It also plans to compete with the brokers who connect truck fleets and shippers.

Fully autonomous trucks remain years away - some trucking industry experts estimate two decades - and the Otto vehicles are currently manned by a driver and an engineer. But the Uber-Otto efforts include a host of other technologies involving navigation, mapping and tracking, which can be deployed even as work continues on self-driving systems.

An executive at one company told Reuters he had already been approached by Uber about hauling his goods, noting that Uber touted recent hires and advances in trucking technology.

Uber aims to ultimately transform the competitive and fragmented $700 billion-a-year trucking industry, which is notorious for low margins. The company is challenging a host of established players, ranging from publicly traded companies, such as third-party logistics firms C.H. Robinson and XPO Logistics, to countless mom-and-pop trucking businesses.

Otto has had motor carrier permits with the US Department of Transportation and California Department of Motor Vehicles to move cargo since earlier this year. Eleven days after the close of the Uber acquisition last month, Otto filed for a new permit to haul freight, noting it would expand its fleet to 15 trucks.

Ron told Reuters that Otto also aims to partner with the industry, and that "thousands" of owner-operator truck drivers have reached out to the company.

"We are talking with everyone," he said. "We don't want to develop technology just for the sake of technology."

Uber - the dominant ride-hailing firm and the world's most valuable venture-backed startup, at $68 billion (roughly Rs. 4,51,894 crores) - last month bought Otto in a $680 million deal. Otto, with about 100 employees, had just launched in January.

"The transportation industry is a relationship-backed business," said Kevin Abbott, a vice president at C.H. Robinson. "There's a lot more to it than just finding a piece of equipment."

Abbott noted that Uber is just the latest in a long line of companies that have tried to take the place of brokers, who typically match loads with vehicles.

Uber and Otto also face competition from a growing crop of startups eyeing the industry. Companies such as Transfix, Convoy and Cargo Chief are aiming to unseat traditional brokers by matching shippers with carriers using complex algorithms, while Trucker Path has built a popular navigation app for truckers.

Brand advantage?
One indication of Otto's ambitions is its recent hiring of Bill Driegert, a logistics veteran who helped found Coyote, a leading freight broker, and served as its chief innovation officer, according to his LinkedIn profile. Uber and Otto are working to build a freight network to connect shippers and carriers, much like Uber matches passengers and drivers.

The trucking push is partly a gambit to leverage the mapping and logistics expertise Uber has gained ferrying passengers and food in cities.

"This is really about connecting the dots, connecting the shippers and the carriers," Ron said. "We are building that on the long-haul piece. Uber, through UberRush and UberEats, built that on the urban piece," referring to the company's on-demand delivery services.

"In Uber, you press a button and an Uber shows up after three minutes," Ron said. "In freight ... the golden standard is that it takes (the broker) five hours of phone calls to find your truck. That's how efficient the industry is today."

Uber is hardly alone in tackling that problem. XPO Logistics - among the world's biggest logistics services - has invested heavily in software that maximizes the utilization of trucks and reduces fuel consumption.

C.H. Robinson has developed technology that allows companies to track their shipments, as well as an app for carriers with small fleets.

Moreover, the model that Uber used to disrupt the taxi industry may not translate easily to trucking, said transportation analyst Jack Atkins of investment bank Stephens Inc. Companies avoid risk when shipping goods more than consumers do when hailing rides, he said.

"I don't really see it as a near-term threat, just because of how complex the industry really is," he said. "It's not as simple as, 'Hey, I want to go from point A to point B in Midtown.'"

Logging the miles
Ron emphasizes that Otto's autonomous driving technology is still in a "testing regimen." The trucks can drive by themselves on highways, with two copilots as backup, but maneuvering off the open interstate remains a challenge.

The trucks now haul random items from the company's garage to test how the vehicles respond to hauling weight. But the company will "fairly soon" move goods for shippers - just about any type of freight, except for hazardous materials, Ron said.

Otto currently has about two dozen drivers who are employees, and next year the company will have more partnerships with independent drivers. Truck fleets will also help test its technology.

Otto has had talks with potential partners and is in the process of trying to cement deals with some of them, Ron said.

"This is all about putting it on the road," Ron said, "collecting the miles."