Offline App and WhatsApp as an Inspiration: Inside Uber’s Bengaluru Development Centre 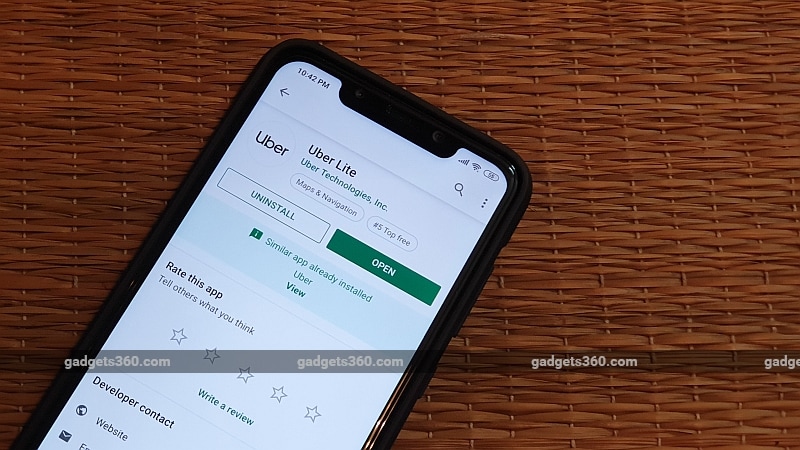 Uber last year released the Uber Lite app for Android. The lightweight app, which is touted to be 85 percent smaller in its download size than the regular Uber app – precisely just 5MB in size – was first launched in India. It was, in fact, the brainchild of the team based out of Uber's Bengaluru tech centre. The core objective behind the Uber Lite app was to deliver a comfortable experience to users who're new to smartphones or who own an entry-level Android devices with low storage and poor network connectivity. But the San Francisco, California-based cab aggregator is now taking a step ahead and adding new features to its 'lite' app to bring new riders on board.

"Our users have resonated well with the experience that we've created," Shirish Andhare, Head of Product and Growth, India — Uber, says in a conversation with Gadgets 360. "It [Uber Lite] is live in India and also in 14 countries in Latin America, including Brazil and Mexico — some of our biggest markets. We've crossed more than two million installs."

The Uber Lite app currently supports English, Portuguese, and Spanish. However, Andhare notes that since vernacular is believed to be an important driver of smartphone adoption in India, his team is actively considering the addition of some Indic languages, including Hindi. The Uber Lite team had originally planned the debut of Hindi and some other key Indian languages for September last year, but that plan is obviously yet to take shape.

"We usually experience, get the results, and then kind of invest more heavily in these areas," the executive says. "But we are looking at Hindi and possibly the top-seven Indic languages for India to experience and see if we get the user adoption improved and enable the comfort level with the app and then we'll go from there."

Andhare warned that the work around the Indic language integration into the Uber Lite app is presently at a very early stage.

Having said that, some other interesting developments are also taking place at Uber's tech centre in Bengaluru.

"We are also working on an offline app, and perhaps using speech recognition or voice search, to make the experience of booking a ride smoother," divulges Andhare, without detailing any specifics.

Journey from zero to more than a million trips
Andhare and his team of engineers, data scientists, and researchers at the Bengaluru tech centre have managed to bring the Uber Lite app from zero to a million trips across over 14 countries in less than a year since its launch back in June last year.

"The idea behind Uber Lite was literally to create a light, instant, and simple application that works for our users particularly in emerging markets on typical devices, and also those who are new to the smartphone user interfaces and are not completely technologically savvy," says Andhare.

Uber's Bengaluru tech centre currently has about 200 people in total, though the aim is to more than double engineering headcount in 2019.

The team behind the Uber Lite app initially prepared a list of features that were available on the original Uber app. But instead of simply ditching the features in the Lite app, the plan was to reduce the steps involved in booking a cab from the original app.

"One of our observations was that in mature applications, we require users to make many multiple decisions on every screen," mentions Andhare. "If you look at Uber Lite, we've minimised that. We want them to be comfortable and to be confident about that one decision they need to make – whether it's my pick-up location, destination, the kind of vehicle I want, and the kind of payment instrument before I book. So we've literally broken it down. That simplicity requires us to be judicious about the kind of features we want to add."

To offer a comfortable user experience with the Uber Lite app, Andhare's team removed the visual appearance of maps. This helped users select their pick-up point from a list of points of interest instead of choosing any particular location on the map.

"The interesting thing is all of this still is maps data – it's just not the visual," underlines Andhare. "But the net result was we ended up having an app that is map-limited, which allows us to make the app even lighter, which we make it simpler for the user experience as well."

Naman Mathur, one of the core researchers behind the Uber Lite app, talks about the three challenges that Uber faced while developing the Lite app — affordability, connectivity, and simplicity.

"More than a third of these users come from connectivity zones that are lesser than 3G," states Mathur. "We noticed that this demographic of users were confused with how maps function, and so after our user research, we reinterpreted the design of the app to cater to their comfort. We made the map less congested, with lesser pointers and heavily relied on points of interest as we realised that most riders feel more comfortable with that kind of location tracking."

Since the Uber Lite app is designed for entry-level Android devices that have lesser screen space over regular smartphones, the team has used a principle of 'tap before type'.

"We approached the designers of the app with this principle of 'tap before type'," says Andhare. "The tap before type means that the app surfaces more and more information that users can type versus having to type long addresses and so on."

"This concept of [the] tap before type came from observing the sizes of phones and the way users use the keyboard," he continues.

Uber Lite app is based on 'tap before type' principle

Andhare also highlights that the Uber Lite app is pickup-first, whereas the regular Uber app comes as a destination-first solution. "It [the regular Uber app] immediately asks you where do you want to go," he says. "But our app says where should we pick you up – is this the right location to pick you up."

The Uber Lite team visited Brazil, Mexico, and India to explore a variety of paradigms to find what should be the most appropriate model. Importantly, months before the Uber Lite launch, rival Ola already brought the Ola Lite app. But the team led by Andhare took a different approach and used WhatsApp as their inspiration.

"We met a grandmother, who was like, I think 60 years old, and she was using WhatsApp and YouTube variously and yet when we asked her to book that experience on our app, it was a little difficult for her," recalls Andhare. "So one interesting idea we had explored earlier was if people are familiar with chat, could it help if we create a booking experience that looks more like say a chat conversation. we experimented with that."

To offer an instant messaging app-like experience through the Uber Lite app, Andhare and his teammates deployed a one-touch booking flow along with simple steps that are being guided to users.

"We learnt that while users were very comfortable chatting on WhatsApp, they were not entirely comfortable having an experience outside of WhatsApp that had any of those elements, and we said okay, a guided, simple step-by-step flow is actually a lot better in this interaction," says Andhare. "We learnt that a guided flow is important and so instead of leaving all the decisions to the user to discover, we actually guide the user."

Initially, the Uber Lite app didn't support basic features such as the Uber Pool integration and Paytm as a payment method. The team, however, updated the app in December to bring in both popular features. The app still doesn't allow users in India to use credit or debit cards for payments, though.

Andhare tells Gadgets 360 that while his team does enable payments through credit and debit cards in Latin America, it still not allows India users for paying through cards as cash experience and then digital wallet payments were observed to be actually more popular in the country. Nevertheless, they're receiving requests to add UPI support.

"We're always looking to learn from the market," the executive affirms. "In fact, we have some reviews on when is UPI coming or can I pay by card and so on. So we keep an eye on these signals."

Unlike the original app, Uber Lite also lacks riders' ratings. Andhare, though, mentions that riders' own ratings by no means are completely gone. "At some point, we'll bring it," he assures. "But we felt it was important to test our core hypothesis, which is this guided flow."

"We make the decisions carefully because we want to keep this app simple and the decision-making very-very simple and relatively clutter-free. But if we see a strong enough signal and demand from our users, now that we have a good critical mass of users using the app, we'll absolutely make sure that we prioritise these things over time," he adds.

For supporting 2G-type network conditions on the Uber Lite app, the team has implemented caching within the app for popular destinations. "When you start typing, even though the network is not that great, because some of the popular destinations are already on the app — in its database — those destinations show up way more quickly than having to go across a poor network to get that response back,” Andhare explains.

Needa Jamil and Anurag Arora from the Product Design Team behind the Uber Lite app tell Gadgets 360 that they've made the app "more tap-able" and "more convenient" for users as compared to the regular Uber app, after collating information based on frequent locations and history of rides by understanding the existing user base.

"To make sure that our team continues to thrive for simplicity while new features are being added, we always go back to our design principles and see if we are doing enough justice to create the simplest experience possible for our end users," the engineers said.

Affordability – the next big focus area
While the Uber Lite team under the leadership of Andhare has managed to build a successful solution for first-time smartphone users, it is yet to attract people for whom Uber as a cab service is still a premium option.

"We do believe that for this audience, in order to make Uber a habit, firstly, we need to provide them with an app that really works and they're comfortable with, and secondly, we need to give them products that actually fit in their daily lifestyle and their budget," says Andhare. "So if you see Uber Lite, we're already surfacing Moto and Auto where these are available in the cities. And affordability is definitely a key-key area for the company overall."

Uber presently has the UberGo as the most affordable option for personal travel. But nonetheless, the company could bring other models to get absorbed deeply in price-sensitive markets like India.

"Having higher capacity vehicles, for example, is one possible area that we could invest in and adapt that to these markets," presumes Andhare. "The other is just making things more efficient overall and also taking existing models like Pool and others and adapting them to the needs of specific markets like India."

"Lots of thinking going on, but Uber Bus is a great example of what we announced in Cairo that could potentially be applicable even in these markets where affordability can actually drive regular usage of safe, comfortable transportation," he concludes.