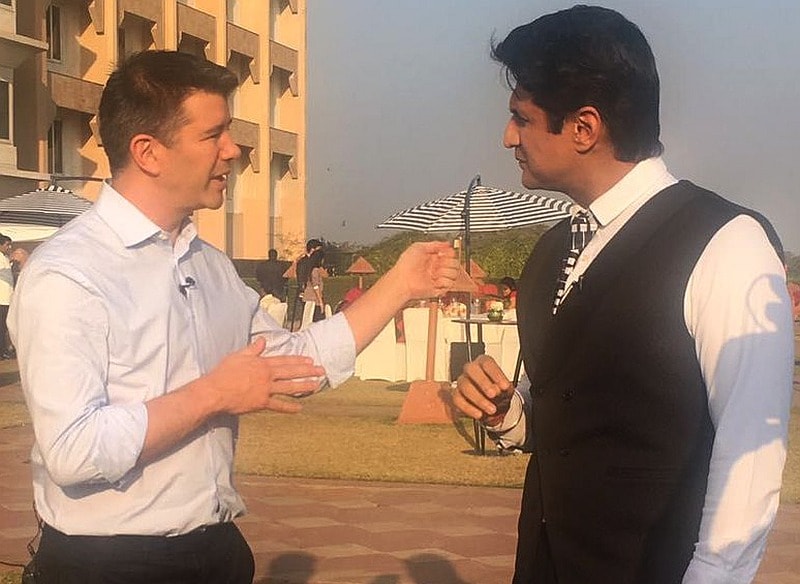 On Thursday, Uber CEO Travis Kalanick spoke to NDTV's Rajiv Makhni for an exclusive interview where he talked about a range of subjects, from autonomous cars, to demonetisation in India, to being named to the advisory team of US President-elect Donald Trump. He's unsurprisingly predictable about some things, speaking in support of surge pricing, and India going cashless.

Uber itself was born because Kalanick's co-founder was stuck without any cabs in Paris, and had to walk home, he says. "I wish we could just push a button and get a ride," he says, explaining how Uber was conceived. Soon after, when Uber was launched in San Francisco - a city where nearly everyone used to drive, Kalanick says - it immediately began transforming personal transportation there.

Describing how Uber works, Kalanick says that the goal is to deliver a steady supply of cars at low rates. There's always demand for jobs, he says, and Uber creates jobs for drivers whenever it enters a city. This enables a flexible supply of cars. Surge pricing, which has been a sore point with both regulators and customers is something that Kalanick sounds pretty proud of as well, and he calls it one of the reasons for Uber's success.

Increased rates when demand is high incentivises more drivers to come on board, he says, which is what ensures a steady supply of cars. With both these factors in place, Kalanick says "Uber has very little to fight, or, very little friction to deal with".

Although most people see Uber as being in competition with other cab services - and Uber's entry into India saw a lot of resistance from taxi unions and others - Kalanick says that car ownership, and not rival cab companies, is the true competition for Uber. According to Kalanick, Uber is trying to position itself as a service that's as reliable as a self-owned car, but cheaper. Uber's there when you need it, and you don't have to worry about other costs and stresses associated with car ownership, he explains.

"We try to lead the space in the technology sector we are in," he adds, saying something competitors will not like at all. "And show by examples the kind of technologies, innovations we can put into our application or into our service generally. It can inspire easily. That's how we become a leader and we stay a leader."

Demonetisation, driverless cars, and democracy
Talking about one of the biggest upheavals in India in the recent past, the demonetisation initiative by the government, Kalanick says it's a welcome change. Earlier, 20 percent of Uber trips in India were paid for by digital means, and after the initiative, it's seen a jump to 50 percent, he reveals. That's great news for Uber as it has to make much less of an effort to manage cash, which involves logistics and security challenges.

In fact, Kalanick reveals, Uber is now working to train its drivers about digital payments taking forward the industry as a whole.

At the same time, the endgame for Uber seems to be to do away with drivers entirely. Asked about driverless cars, Kalanick says that there is a great need for the technology to become prevalent. The Uber CEO says that driverless cars would help reduce deaths and injuries caused by accidents, while also helping ease the traffic problem and reducing the hours we spend on roads.

About the potential of driverless cars in India, he says the country may be one of the last places in the world to adopt the technology, citing the difficulty AI would face when navigating the roads of India. "It has to be a pretty smart vehicle to know how to navigate," he says.

Speaking about the regulatory scrutiny Uber is facing with its live testing of driverless cabs in San Francisco, noting the company is "following all the rules." Kalanick says, "often regulators feel like they want to get their arms around it. We are following the rules but they are still adapting to the change. I think the change is too positive for new rules to slow this down."

Kalanick could soon be in a position to help guide this process - he's been named as part of an advisory panel to US President-Elect Donald Trump. Kalanick says he sees it as a way to further the cause of "urban mobility".

"We look it as how can we be a voice for our drivers and riders. And how do we get them that mobility and make sure that is clear as possible," he says. "For us, we are in all cities - blue cities or red cities - our political stand is called urban mobility."