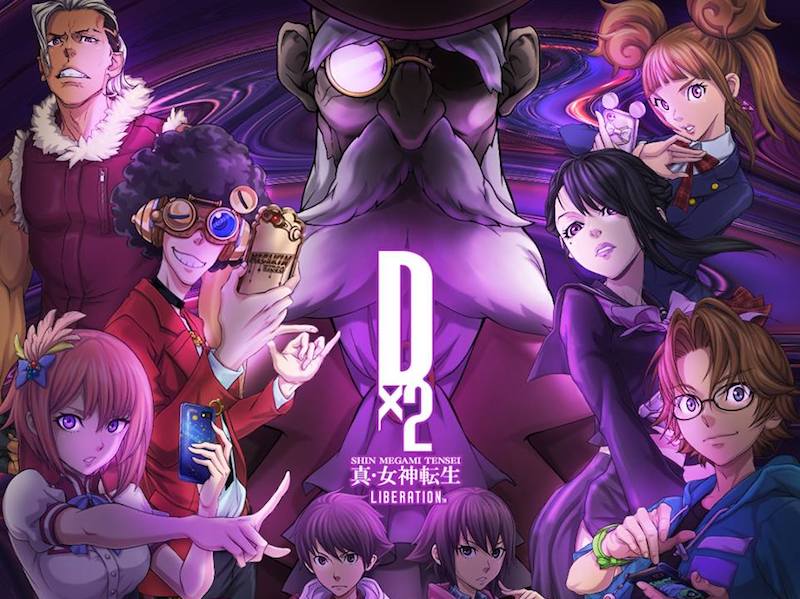 The Shin Megami Tensei titles are characterised by their great narrative. However, mobile games like Candy Crush and Angry Birds are designed for endless gameplay, which can be played infinitely thanks to the fact that there’s no real story to worry about. We had to ask Riichiro how the team worked to make story a critical part of SMT Liberation Dx2 while keeping the contents endless.

"Although I cannot tell too much about it to avoid spoilers, if players finish one story, a new story takes its place with a new world setting," he says. "I believe this works because the world setting is extendable."

The game initially launched in Japan, Taiwan, Hong Kong and Macau, before an extended beta test period in the US and other territories before a full release last week. Riichiro shed light on what’s been added. The focus has been on translating the game for audiences outside Japan rather than tweak its content to suit cultural sensibilities. It’s an approach we’ve seen in other Sega titles such as Yakuza 6 that has cat cafes and hostess bars which are intrinsically Japanese.

"I believe that localisation is the most important factor when we think of this game rather than culturalisation. This is where we’ve put our efforts into," he says. Though later updates would focus on player requests to improve the game’s feature set.

"However, we received many comments from users when the Consumer Beta Test started, so we improved the tutorial and added a 'light-weight mode' [which is a smaller initial download] that you will be able to discover when the game launches. In the future, I want to continue to consider requests from players as much as possible."

What struck us while playing Shin Megami Tensei Liberation Dx2 was how good the user interface and menus look. It’s a bigger challenge when you consider that you play the game in portrait instead of landscape. Aside from making it easier to play the game with one hand while travelling, Riichiro commented on the issues faced while designing the interface for this game.

"We respected the stylishness of the universe and the games made by Atlus [the original developer behind the Shin Megami Tensei franchise] , so our artists have made a great effort to create something that people can enjoy. The most difficult part was to keep its style, but easy to interact, and this game has overwhelmingly more elements than other mobile games, so it surely was a challenge to achieve this," he says.

One of the game’s cooler features is allowing you to use augmented reality to pose with the demons you capture in the game. It seems like a contemporary idea given the popularity of augmented reality and selfies. However Riichiro claims its origins are a lot older than you’d think.

"The original Shin Megami Tensei's world view is 'digital devil comes alive in reality.' The augmented reality function matched very closely with this idea, so I wanted to make that happen. However, since we would like players to experience the depth of the game, we didn't put the augmented reality function at the center of the game cycle," he explains.

Although this may change in upcoming updates. He states that Sega may "consider to update AR function in the future" which could see it having a more central role.

The conversation moves to micro-transactions. Riichiro admits it was a challenge adapt the gameplay to a free-to-play business model in Shin Megami Tensei Liberation Dx2.

"It took us time to adapt the gameplay to a free-to-play model, but I think we made it happen and you should see in-app purchases as a ‘time shortener’ more than anything else," he says. "We are taking in-app purchases as a more organised form — selling items that players want, and reducing the number of items that is difficult for users to understand. We will operate what to do by tracking the metrics in the game."

It's a welcome approach given how many games are laden with multiple currencies and monetisation methods. That said, he’s not shying away from a subscription option akin to Fortnite Battle Pass for Shin Megami Tensei Liberation Dx2.

"I think that this is possible," Riichiro says."We are planning to sell some kind of pass that can be used for 30 days, for example."

With that in mind, players of Shin Megami Tensei Liberation Dx2 can move across Android and iOS devices with ease as the game allows for cross-sync and cross-progress in addition to player versus player (PvP) working across platforms. Given the parity in feature set in the game between Android and iOS we wondered if there would be any difference in visuals or performance.

"In general, I think that the performance of iOS devices offers more stability than some of the Android devices. This is due to architectural differences," he says.

On that note, we wondered how much of a problem the iPhone X notch had caused for the game.

"As iPhone X came out at the same time as our release timing in Japan, our UI artists had a tough time to implement it. Since it was so close to release, I think we did the best we could in such a short time," Riichiro explains.

Finally, we had to ask if Sega would bring the Persona series to mobile next - it seems like a logical step after Shin Megami Tensei Liberation Dx2.

"Sorry, this is not something I can discuss at the moment," came the reply.

While it's not the answer we'd hoped for, we won't be surprised to see the Persona series make it to smartphones sooner rather than later. Perhaps to tide us over before a new mainline Persona game is announced.