The app that gained popularity thanks to offline file sharing is looking to reinvent itself. 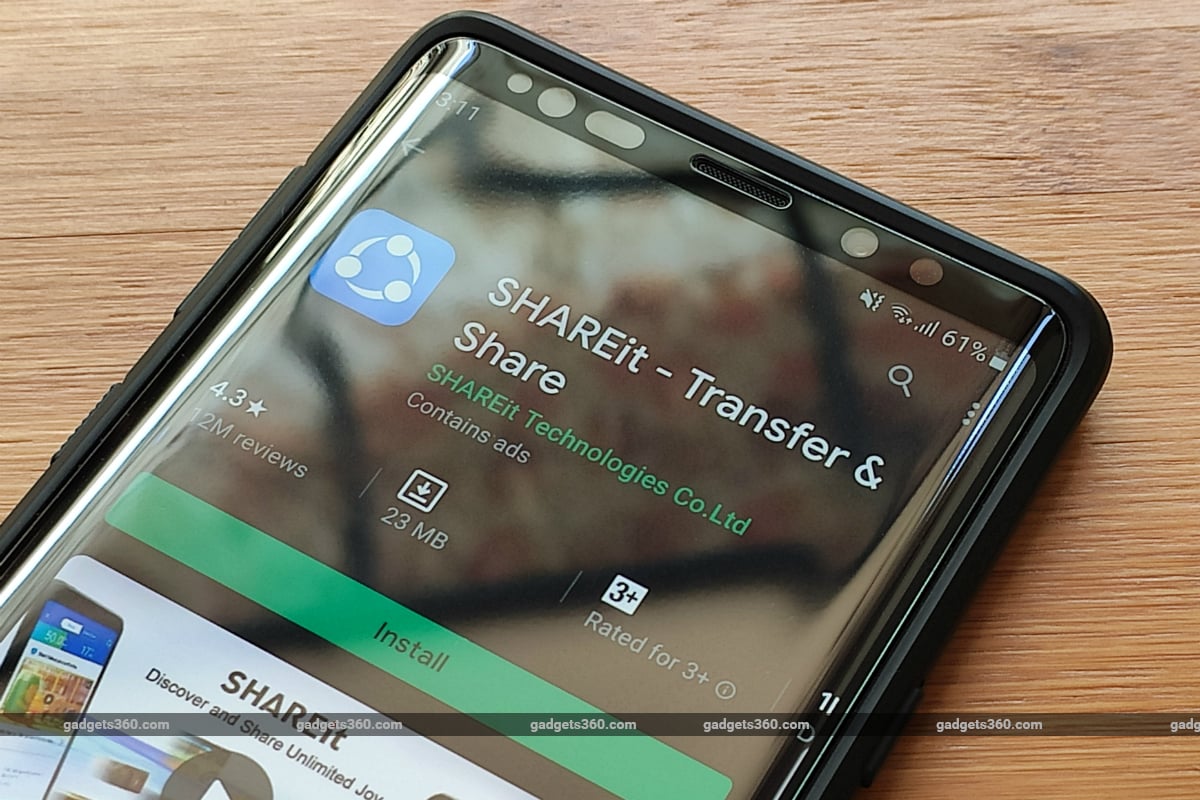 SHAREit claims it has over 400 million app installs in India

With mobile data costs in India the lowest in the world in a post-Jio world, SHAREit, the cross-platform app that gained popularity in the country thanks to its ability to users share large files without any data usage, is exploring new ways to not just retain its install base but also to bring new experiences to its users. The company behind the SHAREit app that entered the world of mobile apps back in 2013 is also bullish about becoming a catalyst for video streaming platforms in the Indian market.

"As our users are evolving, we have to evolve," Karam Malhotra, CEO, SHAREit India, tells Gadgets 360 in a telephonic conversation.

Malhotra joined SHAREit in October last year after the company acquired FastFilmz, an over-the-top (OTT) media platform where he was a co-founder. Currently, he's in charge of the idea to leverage the large user base of the SHAREit app and make them work with various OTT apps.

Rather than directly stepping into the growing market of video streaming platforms, SHAREit is trying to operate as an aggregator. The India team of the company under the leadership of Malhotra has already started working closely with platforms such as ALTBalaji, Hungama, and Hotstar and is looking to bring new names on board in the coming future.

"We do what we're best at, which is distribution," underlines Malhotra. "We are a very, very viral social platform and are good at distributing things."

SHAREit says it has more than 400 million app installs in India, with over 100 million of them in tier-II and tier-III cities. Malhotra tells Gadgets 360 that a majority of SHAREit users in the country are non-English speakers, including 30 to 35 percent users who speak Hindi, while only around 15 percent of its users speak English. This is why the company thinks it can help video streaming platforms — especially the ones focussing on regional languages content — reach new users.

"For people like SonyLiv and ZEE5 or for more vernacular platforms, there is a much larger growth ability than pure English,” Malhotra says. "And it's just because the new India or the new mass-market India that's coming into digital phones happens to be speaking in vernacular."

A report by advisory firm RedSeer supports what Malhotra says by noting that there are around 210 million "vernacular-preferring digital consumers in India who are also monetisable". These consumers are said to comprise about 80 percent of all digital content consumers in the country.

In addition to video streaming platforms, SHAREit is actively working with Indian telcos as well.

"We're currently doing a lot of work with Airtel, we're getting the entire Wink platform, all the content on to SHAREit," specifies Malhotra.

"I think we can work with telcos to drive their loyalty programmes and drive more stickiness to their users to help them distribute their content."

The executive also tells Gadgets 360 that SHAREit has initially signed an agreement with Airtel Wynk alongside having discussions with Airtel to partner for loyalty programme Airtel Thanks, as well as working on the gaming front.

"We learnt it from multiple ways — we learnt from the content they want, then we also see some people are sharing some file names, and we can see the file name is written in Hindi or English or Tamil, Telugu, so we understand, okay, maybe the person is into Hindi content or Telugu content or Tamil," notes Malhotra. "So we look at multiple indicators to try and identify your language. Because users don't like to be asked, they like to be just almost offered things automatically, because they expect a digital company like SHAREit to figure it out.”

SHAREit customises the delivery of content through its app

Malhotra states that SHAREit doesn't share any user data with any of its partners.

Customising the delivery of content has so far shown good results for SHAREit. Malhotra states that the team garnered almost 50 percent of click-through-rate (CTR) through the cricket-focussed notifications it had specifically sent to the users who watched or engaged with the cricket content through the SHAREit app.

"I think for us, like, what we have learnt, personalisation and content customisation is very important," he says. "Because if you don't personalise or customise, then you'll never see satisfactory numbers."

Interest towards gaming
Alongside being a content aggregator, SHAREit is set to leverage its existing user base of active gaming users by creating an ecosystem of gaming. The SHAREit app is already useful for sharing large-size games that aren't easy to download using mobile data. But the team wants to move beyond being just as a sharing and transfer solution for gamers. Instead, Malhotra tells Gadgets 360 that there are plans to offer the SHAREit ecosystem to game developers to distribute their games, without worrying about monetisation and reach.

"We're not looking to become the next PUBG," he emphasises. "But we are looking to use our user base and distribution to create an ecosystem."

The SHAREit team has already begun working with some of the game studios to launch their titles. The announcements are yet to be revealed publicly, though.

Aside from working with game developers and studios, SHAREit is in talks with eSports organising companies like Nodwin Gaming, the executive mentions.

"But I think there's still a very large amateur gaming ecosystem that first needs to be discovered and nurtured online and then from there, you identify a few more semi-professional gamers who you can bring into some of these offline events," he adds.

The ongoing developments with video streaming platforms, telecom operators, and game studios would help SHAREit create more engagements amongst the existing users in India. With 400 million installs, the idea isn't necessarily to get more users, but to make the existing user base more engaged.

"While a lot of people thought SHAREit may become less helpful when people have more data, I think it's completely the opposite," he concludes optimistically.

Adobe Cuts Off Venezuela Clients, Citing US Sanctions
Leaked Google Guidelines Suggest How It Is Changing the Rules for Android Device Manufacturers