Pokemon Go Players Risk All for Their Monsters 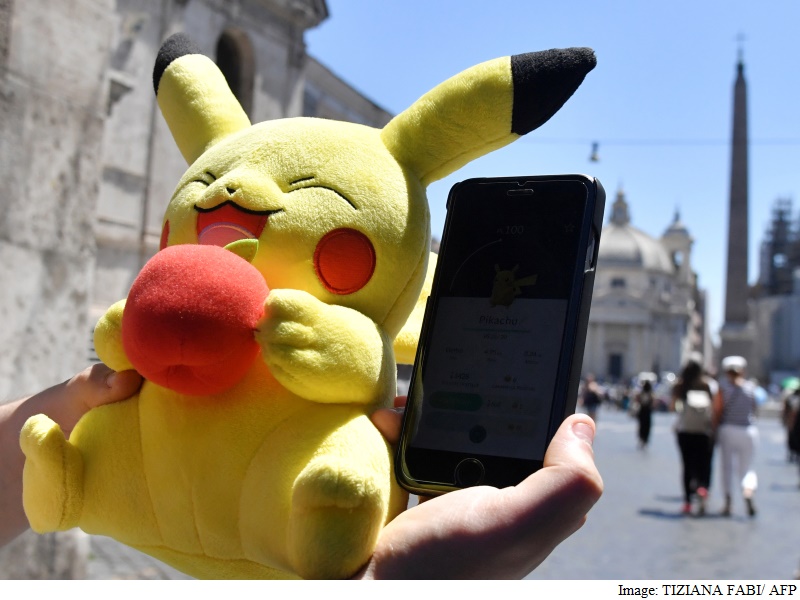 Walk into a minefield, enter a military base or simply cross the road without looking: fans of Pokemon Go are prepared to do whatever it takes to capture the likes of Pikachu and its friends.

A virtual hunt that has taken players worldwide by storm, the game has had real-world consequences in the Tokyo stock exchange and beyond.

The "augmented reality" smartphone app challenges users to roam the real world in search of virtual cartoon monsters to capture and train for battles, incorporating characters from the hit Nintendo game of the 1990s.

"By appealing to several generations, from those who have memories of the original Pokemon in 1996 to the very youngest gamers, this app has the potential to reach vast numbers of players and become the reference point for virtual reality," says Laurent Michaud, head of digital entertainment at the Idate ideas laboratory.

The phenomenon has grown so rapidly that authorities in a number of countries have issued warnings about the dangers of the game, while police forces have taken to social media to remind users how to behave safely in public spaces.

And not without cause - the hunt for Pokemon (or "pocket monsters") has resulted in some unexpected situations.

In Indonesia, a French player was stopped by police and questioned for several hours after the app led him into a military base. He was later released.

Players in Bosnia meanwhile have been warned to avoid minefields, which remain a hangover from wars that wracked the country between 1992 and 1995.

And the Japanese government has published a leaflet advising children of the potential risks of Pokemon Go - including the dangers of playing the game while cycling - despite the app not yet having been officially released in the country.

Pitting the characters against each other is associated with gambling, which is banned under Islam, and the game is also perceived as promoting Darwin's theory of evolution.

The Israeli navy, however, makes no secret of its passion for Pokemon Go, publishing a screenshot of its forces capturing a sea-based monster with the caption: "There are some Pokemon only we can catch".

A much-shared Palestinian tweet shows a Pikachu emerging from the ruins of house in Gaza.

While the game is only officially available in some 40 countries, many players have found ways to access the app before its release in their territory.

In France, where the game is still supposedly unavailable, police have already tweeted advice to Pokemon "trainers", including: "Do not play Pokemon Go while driving" and "Pedestrians - take extra care".

Behind the phenomenon is the Pokemon Company but also its shareholder Nintendo, the Japanese group whose devices have been needed to play any earlier versions of digital Pokemon games.

And while Nintendo's profits from the recent explosion of Pokemon Go remain unknown, investors have already made their feelings felt.

But real-life security risks are not the only threat, as the game has already attracted the attention of hackers, according to the Russian internet security group Kaspersky.

"Nintendo servers have already experienced a number of problems concerning traffic, and their attackers are very aware that the group cannot afford to have broken or inactive servers," says David Emm, a researcher at Kaspersky.