“Our focus was on the suitability of the initial template we purchased and the origin of the developer was neither displayed nor relevant,” the Mitron app co-founders said. 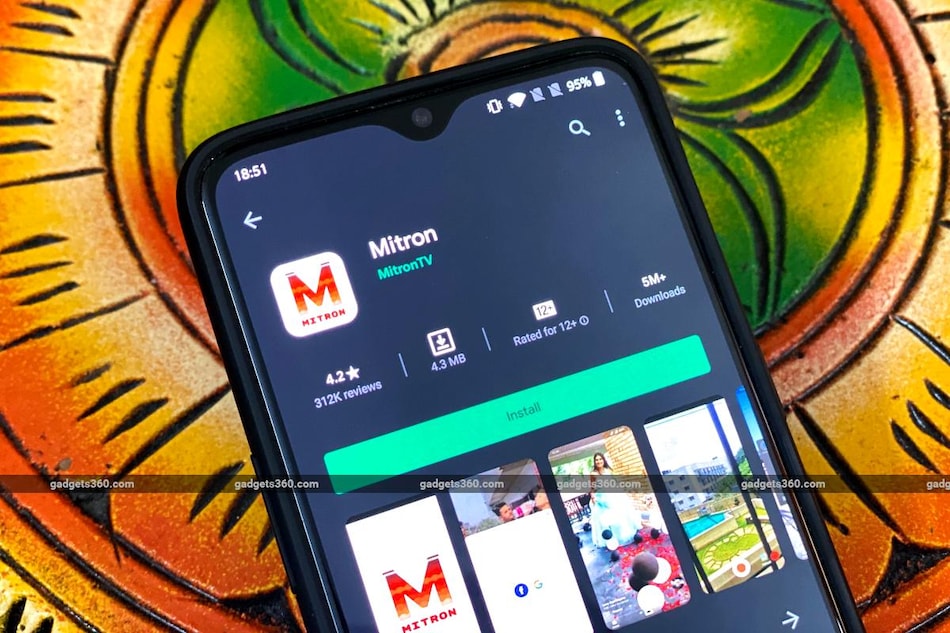 Was the Mitron app made in Pakistan? Is it just a clone of TikTok, and why was it briefly removed from Google Play? For better or for worse, the app which became famous as a ‘Made in India' alternative to TikTok, at a time when a huge YouTube versus TikTok fight was brewing and anti-China sentiment in India ran so high that an app called Remove China Apps ended up being one of the most popular free apps in India, has gained a lot of notoriety. This only increased once reports broke that the source code of the app wasn't developed by the Mitron team but instead, purchased, for just about Rs 2,500, from a software developer based in Pakistan.

Gadgets 360 spoke to the co-founders of the Mitron app, Shivank Agarwal and Anish Khandelwal, to clarify some of these doubts, but at the end of our conversation, more questions remain.

Although Agarwal and Khandelwal have been speaking up now to try and make it clear that their app does not have any connection to Pakistan, their responses have been unclear at best. Speaking to Gadgets 360, as well as other news organisations, Khandelwal said that they purchased the licensed code and a template of the Mitron app from Envato. "Our focus was on the suitability of the initial template we purchased and the origin of the developer was neither displayed nor relevant,” he said.

However, Irfan Sheikh, the CEO and co-founder of Pakistan-based software developer Qboxus had already made the same claim — that Qboxus' code for the TicTic app was purchased from Envato's marketplace CodeCanyon, to create the Mitron app. In fact, security researcher Karan Saini did an analysis of the code of the Mitron app, and wrote that “several strings with TicTic have been left as it is.”

From the same article, it was noted: “Further, a ‘change_log' file present in the decompiled Mitron source code contains the string 'com.dinosoftlabs.tictic' – which is the package name of the TicTic application developed and released by Qboxus.”

Despite these questions, however, Khandelwal doubled down on the 'Made in India' narrative, telling Gadgets 360 that the app was developed by a “small team based out of Bengaluru.” According to him, the app was made by a team of five people. Khandelwal also said that it was not a TikTok clone, although in its listing on Envato's marketplace, Qboxus describes the TicTic code as: “Build your unique Tik Tok / Musical.ly / Dubsmash-like Clone Today!”

However, at this point, the Mitron founders are not willing to confirm that the code they purchased was from Qboxus. Asked about it, Khandelwal said, “Our focus was on the suitability of the initial template we purchased and the origin of the developer was neither displayed nor relevant.” In all his replies, Khandelwal completely avoided mentioning Qboxus directly.

However, Sheikh, who initially reached out to multiple publications to let people know about the connection between TicTic and Mitron, has also decided not to speak further on the matter. Asked about it, he told Gadgets 360, “Well actually, I don't want to comment on this issue anymore. The reason is just business.”

What's left is a mess of contradictory claims, where Khandelwal both agrees that he purchased the code from Envato and then says that it was fully proprietary, and also says that any claim by any party claiming that it is a repackaged app is “false, malicious and libellous,” despite the references in the codebase of Mitron to TicTic, as noted in the analysis by Saini reported in The Quint.

We have reproduced the entire, unedited conversation between Khandelwal and Gadgets 360 below:

How many members are there in your team?
Khandelwal: We are a small team based out of Bangalore but we are quickly expanding the team to rapidly improve the product experience and to continuously improve the backend design to scale.

How did you get the idea to develop the Mitron app?
Khandelwal: My co-founder Shivank Agarwal and I spent a lot of time brainstorming on our startup idea before we decided to build Mitron. Our mission is to build a short-form video app that reimagines digital engagement and entertainment, while being sensitive to the users in our market and compliant with our local laws.

What were the initial challenges in building the Mitron app successful?
Khandelwal: We launched an initial version of Mitron just over a month ago, making constant improvements even as we were working our full time jobs. Our plan was to go fully behind Mitron from June, after some initial iterations on the product. MitronTV, to our pleasant surprise, started to take off rapidly during the last 2 weeks. Frankly, we weren't prepared for such a sharp rise in the adoption of the product. Given the rise of Mitron, the main challenge we faced was to rapidly address several aspects of the business in a very short period of time.

Could you please let me know the exact number of people working behind the scenes apart from you and Shivank? You mentioned that you all were working your full-time jobs initially. So, does this mean that both you and Shivank are now no longer doing your earlier jobs and devoting all your time to the Mitron app?
Khandelwal: We are a team of 5 people including the founders. Some of us have transitioned into Mitron TV responsibilities fully and others are in the process, serving their notice period with their current employers.

Why did you try to imitate TikTok for designing the Mitron app?
Khandelwal: Frankly, we are not imitating any app. If you think about it, all e-commerce sites have some common elements and it doesn't mean anyone imitated anyone else. We started with an initial design and we are quickly making changes to it based on the feedback of our users. We have released 4 new versions of the app in the last 2 weeks.

Since some media reports suggest that the initial code was purchased through Envato, could you please clarify on the author of the code as we can see Qboxus as one of the listed authors there as well?
Khandelwal: Envato is a marketplace where users can purchase licensed code. We also purchased an initial template from this marketplace and we are the legal owners of the codebase of Mitron. Our focus was on the suitability of the initial template we purchased and the origin of the developer was neither displayed nor relevant.

How are you improving the experience?
Khandelwal: We are looking at customer feedback and then prioritizing tasks keeping in mind our product road map. We are and will continue to experiment with design and interaction changes. Our focus is also on improving overall app performance and data consumption.

Are there any plans to bring the app to iOS as well?
Khandelwal: We are planning to launch Mitron on iOS in the next two to three months. Our focus initially is to improve and stabilize the design on Android before we launch on iOS

What's next after the Mitron app?
Khandelwal: This is a long journey. We started with a mission when we launched Mitron and we are passionate to build Mitron as one of the most popular apps in India that is built in India, that is sensitive to our local norms for content and that is compliant with our local laws.

On the purchasing of the code part, we certainly know that Envato is a marketplace — just like Apple App Store or Google Play for getting apps. I even used to buy some themes from Envato for my college WordPress sites a few years back. But why aren't you revealing the name of the developer from whom you bought the code? The Qboxus team is showing Mitron as one of their projects on their site and even on their Envato author page. So, if they don't have any role in the app, should you not say that explicitly?
Khandelwal: Unfortunately, there is a lot of misinformation around this. Let me explain this in some detail.

Firstly, we live in a world where many packets of technology can be open-sourced or purchased legally for use in your own app. Almost every well-known tech company purchases packets of codebase or open-sources codebase for use in their own applications. When any company purchases or open-sources such code, the focus is on the suitability of the code for the company's purpose and not the origin of the developer. So, any discussion around the origin of the developer is not relevant to us.

Secondly, as long as someone purchases packets of codebase legally or uses open-source code, it is perfectly legitimate. We legally purchased the initial template of MitronTV from an Australian marketplace EnvatoMarket. We are the legal owners of the codebase of Mitron.

Thirdly, any such code that is purchased or open-sourced is just one little brick in the wall. Do you really think someone can simply purchase a template and get millions of downloads? If it was so good, why didn't the seller create their consumer facing app instead selling the code for $30?
It's because such templates (and their codebase) are a commodity and they are worth what they are priced at.

We fixed numerous bugs in that codebase and we made significant improvements to both user-side experience and back-end code to make it a scalable platform that can handle this kind of steep jump in traffic. Nearly all the files of the initial code have been changed.

It is unfortunate that when any success story like Mitron happens, there are always others who want to claim their place in the limelight. If Qboxus have used our brand name Mitron on their website, they have done so illegally and we will pursue this matter accordingly.

Your recent interviews in the media have shown that your aim to offer the Mitron app as a “Make in India product.” But as you used the initial code template from Envato — no matter from which developer — how would you justify the app as an Indian solution?
Khandelwal: We are an Indian startup that's based in Bangalore. Mitron is an Indian app which is developed in India and as part of our mission to build a great experience for our users, we will always remain open to using any open-source code or legally purchased codebase that we can build on top of, in our application. And we have used servers in India for data storage and computation.

Just one last question to get some clarity — Could you please confirm if the code you bought from Envato was from Qboxus?
Khandelwal: The codebase of Mitron is proprietary and we are the legal owners of the codebase. Any claim by any party claiming that it is a repackaged app is false, malicious and libellous.

We have shared our perspective with you in great detail and I sincerely hope you will represent our responses comprehensively.