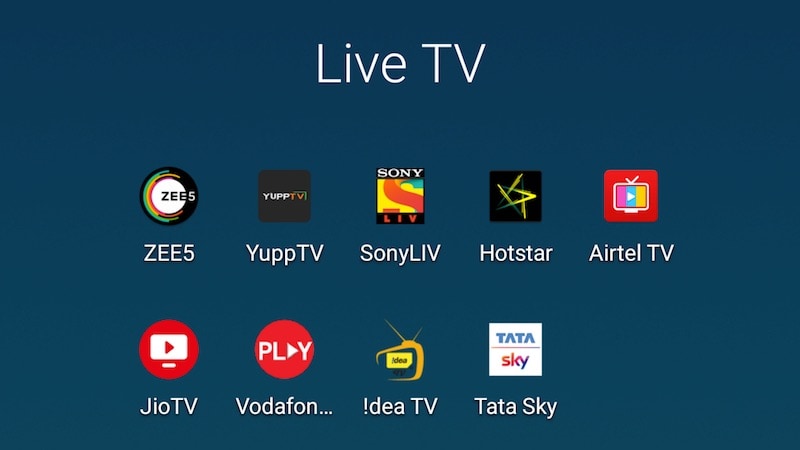 Want live TV on your phone? It turns out that there is a huge range of options that you can choose from - and most of the options are pretty reasonably priced. Gadgets 360 looked at the various Indian live TV apps, going through listings and other people's recommendations before trying the apps out, and then we picked the ones we thought worked well enough to recommend.

These apps fall into three basic categories. First, there are the third-party apps that you can use for a fee. The rates they charge and the features they offer vary, button general, all of these should work for you. Then, there are the on-demand apps that have live sports - not great if you're looking to just browse channels to find something fun; but on the other hand, if you want to watch cricket, then these guys have you covered. Third, all the major telcos (aside from BSNL) and DTH providers also have their own streaming apps for their subscribers, which are free or available via bundles, so you can enjoy streaming without spending.

1. Zee5
Made by the same company as Ditto TV, this streaming app is owned by the Zee group, and lets you stream live TV for free, and includes free and paid video on demand content. An all access pass costs Rs. 99 per month. It's available in 11 languages including English.

The app offers mostly - but not just - Zee's own channels. This includes English channels like Zee Studio and Zee Cafe, music channels like Zing and Zee ETC Bollywood, and Zee's many regional channels. You also get access to channels like Cartoon Network, Pogo, DD channels, and BBC World News, though sports channels are missing.

Zee5 has some kids channels like Cartoon Network and Pogo

On the plus side, there's a lot of content to choose from, and not all of it is behind a paywall. However, live TV is behind the paywall, and if that's what's most important to you, then Zee5 will be a bit of a letdown, especially considering that the Ditto TV app offered live TV at just Rs. 20 a month.

Get Zee5 on Android | iOS

2. YuppTV
YuppTV offers over 200 live channels, and you have a 7-day catch-up feature so you can watch shows that you missed during the week. There are 12 languages, and a number of channels to choose from. However, entertainment options are a little limited here.

Another useful feature is that YuppTV offers a two-hour rewind buffer, so if you missed a part of your favourite program, you can just rewind. It also allows you to pause live TV.

YuppTV offers a day's access for Rs. 5, a week's for Rs. 30, and a month's for Rs. 99. It's sachet pricing is a good selling point, but there isn't as much entertainment competition as some of the competitors, unfortunately.

Get YuppTV on Web | Android | iOS

3. Sony LIV
Sony LIV is a streaming app which gives you on-demand access to shows from the channel. Unfortunately, at least on the Xiaomi Mi Max 2 we were testing it on, the app isn't very stable - it crashed three times in 30 minutes. If that's something you're willing to try though, then it has a good selection.

There's international ad-free live TV in the premium section with channels such as BBC Earth and SET HD, apart from movies and TV shows. On the free side, you've also got cricket and other live sports, so for a sports fan, the app certainly has a lot to offer.

Live sports are part of free access, which is a definite plus point, and the overall selection for the app is pretty good too. If it stopped crashing every ten minutes, it would be perfect.

4. Hotstar
Hotstar is the most popular video on demand service in India, according to Counterpoint research, but it also offers live sports streaming. Hotstar is relatively expensive when compared to some of the other choices on this list, but it frequently offers deals, so if you're willing to commit for a year, you can get a good deal.

There's a solid mix of free and premium content, and on the premium front, thanks to Hotstar's tie-ups with Disney and HBO in India, and the fact that it's owned by Fox, it actually boasts some of the best international content on VoD subscription in India.

Hotstar's live sports premium streaming isn't free of issues either, but it has improved significantly in the last one year, and the company has been on a hiring spree to bring developers and improve its apps, so hopefully it's only going to get better.

Get Hotstar on Web | Android | iOS

5. Airtel TV
Airtel is one of the biggest telcos in India, and if you're a subscriber, you have free access to Airtel TV for now. Free is always good, but with Airtel TV, you also get a bouquet of 368 channels. The app is restricted to Airtel subscribers, but you can use it on any network - for example, we logged in with our Airtel credentials, and used the app on a Vodafone connection.

Airtel TV has a good mix of live and on-demand video.

Airtel TV has a mix of live TV and VoD, and it has a simple and easy to use interface that we liked, though the live TV program guide could use some improvement. It's VoD options are also quite appealing, making this a good option for Airtel subscribers. You can get free access even with Airtel broadband, so it's not limited to Airtel phone connections either.

Get Airtel TV on Android

6. Jio TV
If you have a Jio Prime membership, you get access to all of Jio's many apps, including Jio TV. Coupled with Jio Cinema you get live TV and on demand both. The catch is that you have to be a Jio subscriber to use the app, and it will only work on a Jio connection, or if there is an active Jio SIM in the device being used.

Jio TV has a massive list of 583 channels - this is padded with channels like Jio Sports, Jio Events, and so on, but there's a lot to choose from. Another plus point is a nicely designed program guide that makes it easy to see what's coming up next on multiple channels.

However, the player interface is not good, and settings like playback quality are hard to find. On the other hand, if you're a Reliance Jio user with jio Prime, you can't beat the price of Jio TV - free.

Get Jio TV on Android | iOS

7. Vodafone Play
Not to be left behind, Vodafone also has its own streaming app called Vodafone Play, which you can access with your Vodafone connection. This gives you access to much the same content as Airtel TV - and also shows from ALT Balaji, Hooq, Yupp TV, Ditto TV and Arre. Vodafone RED customers get free access to Vodafone Play for 12 months. Once again, you have to be a Vodafone subscriber to make use of this app.

Vodafone Play has a good selection of channels

Unlike Airtel TV, Vodafone Play doesn't show how many channels it offers, but there's a good mix of news, entertainment, kids, and movies, in different languages. If you're a Vodafone subscriber, you should definitely try this out.

Get Vodafone Play on Android | iOS

8. Idea Movies & TV
Like the other operators, Idea also has a very similar offering called Idea Movies & TV, which idea subscribers can use. It has the same mix of live TV, video on demand, and there's a tab called catchup shows that lets you catch up to live TV episodes you might have missed. As with the others, a non-Idea customer will not be able to use this app.

It's a solid implementation, and it has features like downloads for on-demand, adding to watchlist, data saver mode, like the other telco offerings. It looks like the catalogue is a little slimmer than Vodafone or Airtel, but Idea's app doesn't show the total number of selections so you can't be certain. By browsing though, it seems the case, but again, if you're an Idea subscriber, this can be a great way to dip your toes into streaming.

Get Idea TV on Android | iOS

9. Tata Sky Everywhere
The Tata Sky app lets you watch live TV on your phone or tablet, apart from managing your account. It doesn't allow you to watch everything that's part of your TV subscription, but rather, there are over 220 channels that are available online. And obviously, you have to have a Tata Sky account to use this app.

If you're looking to watch live TV on the go, and have a Tata Sky connection, this is an app you should make use of. There's a good selection of channels, and it's also a handy app to manage your account. The one downside is that the playback pixelated the most of all the apps we tried.

These nine apps are our favourite options to watch live TV on your phone in India right now. Another app to consider is Voot. The free app does not include live streaming, but it does allow you to stream content from Indian channels on demand. Voot is owned by Viacom 18, and so allows you to stream shows from channels under the same umbrella, such as Colors (which is available in various languages), Comedy Central India, MTV India, VH1 India, and Nickelodeon India, at no charge.