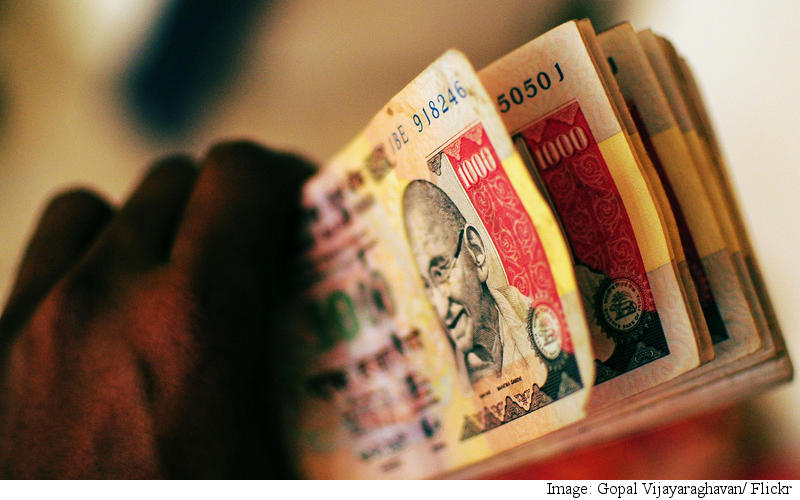 Looking back, 2015 has been a landmark year for India's tech startup landscape, with a total of 114 startups that filed series A rounds by December in the calendar year, with total funding amounting to $542 million (roughly Rs. 3,595 crores). If you do the math, the average funding round in a Series A comes to $4.75 million (roughly Rs. 31.5 crores).

Series A is usually the first stage of funding a company receives from VC firms, following seed funding rounds from angel investors. This happens when a company has just started to earn some revenues or otherwise proves its business model, but is typically not making a profit and will require the infusion of funds to scale up. Most series A investors are venture capital funds, or angel investors, who are willing to accept the high risk involved.

Most startups try to build an maintain a defensible position in their sector harnessing the best talent, technology, and design to harness network effects. If the product or service continues to show a promising growth rate, and the sector shows headroom for growth, they raise subsequent funding rounds - some on this list are up to Series H already.

The data on the top 25 funded startups, courtesy Tracxn, reveals plenty of insights on the startup ecosystem. The largest funded player on this list is Ola, which came in with $900 million (roughly Rs. 6008 crores) in funding, while the smallest is Cardekho, which secured $50 million (roughly Rs. 333 crores) in funding. The average age of a 'startup' on this list is five years -- the youngest is Jaipur-based Netmeds, which was founded in 2015, while the oldest is 11-year old Bengaluru-based Manthan Systems.

The data indicates a two way fight among taxi aggregators sector - with no other player other than Ola featuring in the top 25 list as it takes on US-based decacorn (a startup valued at $10 billion or more) Uber. E-commerce and mobile commerce players such as Paytm, Flipkart, and Snapdeal dominate the VC funding landscape, followed by plays in the e-commerce logistics space (Delhivery, Ecom Express), and home decor and furniture platforms (Pepperfry, Urban Ladder, Homelane). The last 12 months saw plenty of funding activity in the online healthcare sector as well - Practo and Netmeds feature on this list.

From a funding perspective, Sequoia Capital leads the pack, with investments in nine of the top 25 players, followed by Tiger Global with six, Steadview with five. SoftBank has four, while Accel and Helion have three each. As per news reports, the three startups became unicorns (crossed a $1 billion valuation) this year -- Quikr, Zomato and Paytm. Notable omissions in this list are Housing.com and Tinyowl, two startups that garnered a lot of attention and growth, but then saw significant layoffs this year. 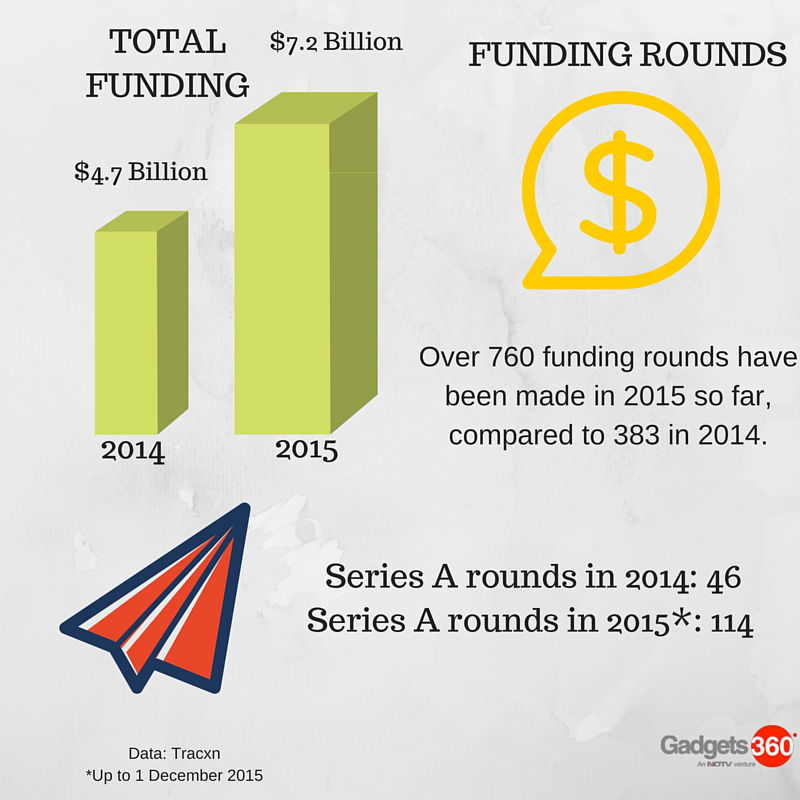 Here's a quick look at the 25 highest funded Indian tech startups this year.

1) Ola
India's largest taxi aggregator secured $500 million (roughly Rs. 3,299 crores) in funding in November, catapulting it to the pole position in this roundup. In the funding announcement, Ola quoted a growth rate of 30 times in the last one year, and now fields over one million booking requests a day.

2) Paytm
Valued between $3-4 billion, Paytm is arguably India's most used mobile wallet, with a claimed user base of over 100 million. Paytm provides apps for shopping on almost every mobile platform, and got a license from RBI to set up a payments bank, enabling it to offer current and savings account deposits.

(Disclosure: Paytm founder Vijay Shekhar Sharma's One97 is an investor in Gadgets 360.)

3) Flipkart
Arguably India's most popular e-commerce marketplace, Flipkart is certainly the most capitalised, valued at over $15 billion, according to news reports. The company pivoted to a mobile first model, threatening to go app-only, and then bowled a googly with Flipkart Lite, providing an app-like experience on Chromium-based mobile browsers.

Notable launches this year include a messaging layer called Ping, and the company moved to its homegrown data centre in Chennai this year. It also sold approximately 8 million items, and had a GMV of over $300 million (approximately Rs. 1,945 crore) during the Big Billion Days Sale. Major acquisitions this year include FX Mart, Appiterate, and AdIQuity.

5) Grofers
Hyperlocal delivery platform Grofers was in the news late November for reportedly raising $120 million (roughly Rs. 800 crores) in its series D round. The two-year-old startup acquired MyGreenBox, Spoonjoy, and Townrush, all this year. 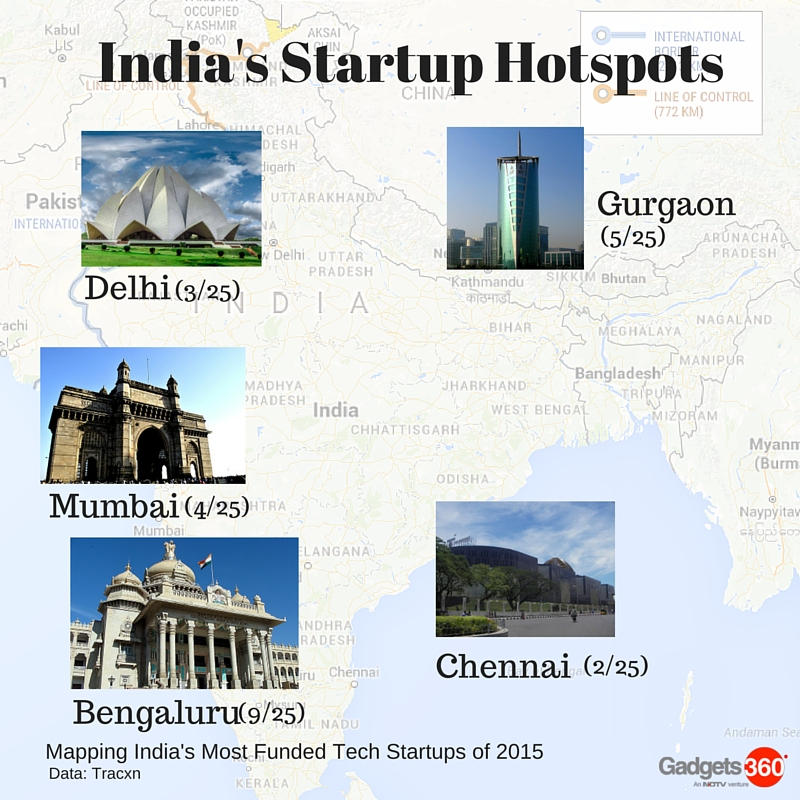 6) Quikr
Online classifieds website Quikr launched a chat messaging feature earlier this year, and secured a $150 million (roughly Rs. 1,000 crores) funding round in April in its Series H from AB Kinnevik and Tiger Global. The company also launched QuikrJobs, a recruitment platform for blue collar, grey collar and entry-level jobs in in September.

8) Oyo Rooms
The two-year old startup, founded by 21 year-old Ritesh Agarwal became a household name after it received $100 million in funding from SoftBank in August this year. The startup operates in an asset-light model, tying up with existing hotels to offer a 'standardised experience', with rooms starting at Rs. 999 a night, offering amenities such as AC and Wi-Fi. Oyo Rooms offers apps on Google Play and App Store, and recently tied up with Airtel to offer Wi-Fi and DTH services.

9) Practo
Online healthcare platform Practo raised $90 million in its Series C funding in August, and went on to acquire Insta Health, a provider of cloud-based hospital information management solutions, Qikwell, and hospital appointment scheduling platform a month later. Currently present in four other countries apart from India - Singapore, Philippines, Indonesia and Malaysia - it has global aspirations in the healthcare space.

10) Zomato
Another Indian tech startup that is thinking global is restaurant search and discovery platform Zomato, which lists 1.4 million restaurants across 23 countries. Zomato shut down its Cashless business due to a lack of product-market fit, and laid off 300 employees in October. The startup is known to have a demanding work culture, its CEO's mail was widely circulated and dissected earlier this month. The seven year-old company has raised $223.8 million (roughly Rs. 1,450 crores) in eight funding rounds so far, having raised $60 million (roughly Rs. 400 crores) in its latest funding round in September. 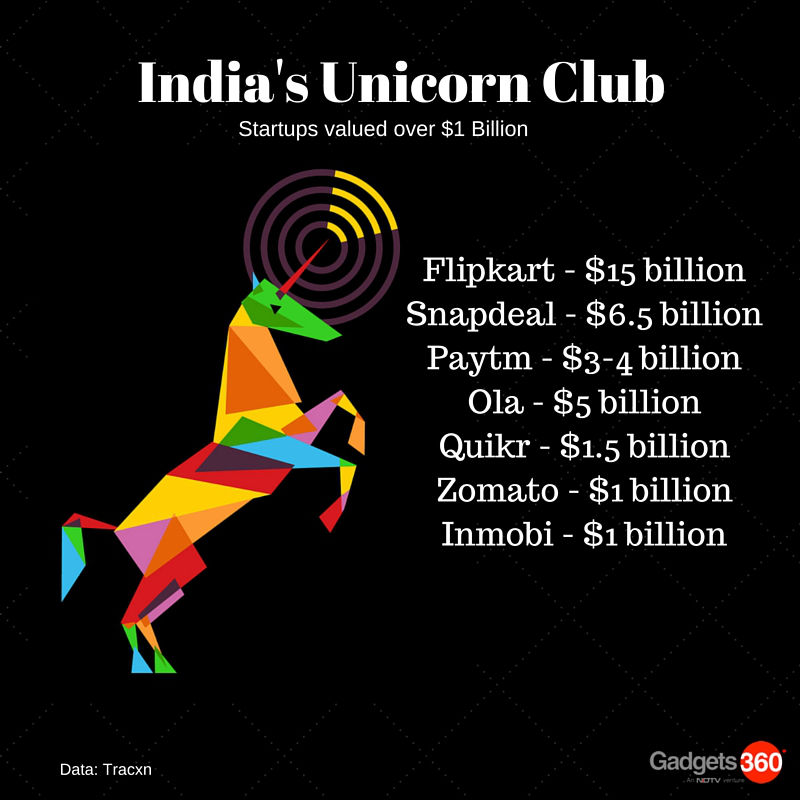 11) Inmobi
Ad-tech player InMobi featured in MIT Technology Review's Top 50 Disruptive Companies in 2013. The company launched its mobile discovery platform Miip in August, bundling it over 40,000 mobile apps at launch, as a complement to walled-garden experiences like Facebook or Twitter. Its tie up with China's Apus in September, could potentially help it to reach 500 million new users. In October, the went live with its partnership with content recommendation engine Taboola.

12) Pepperfry
Furniture and home products marketplace Pepperfry secured $100 million (roughly Rs. 667 crores) in its Series D funding round led by Goldman Sachs Group and Zodius Technology Fund in July this year, which it plans to use to enhance its logistics and invest in its technology team, apart from adding new experience centres.

13) Saavn
Music streaming service Saavn closed a $100 million (roughly Rs. 635 crores) funding round led by Tiger Global Management in July this year. Saavn claimed a ten-fold increase in daily active users in India in September, and has recorded over 250 million streams a month.

14) Shopclues
Four year-old e-commerce marketplace Shopclues saw a $100 million funding round in January in its Series D in January. The company claims 50 million monthly visitors on its website, and targets tier-2 and tier-3 cities.

15) Yepme
Yepme is an online private label fashion brand that targets customers in tier-2 and tier-3 towns, selling on other marketplaces, and also on its own site. The company offers apps on Android, iOS and Windows, apart for a mobile version of its website optimised for slow internet speeds. 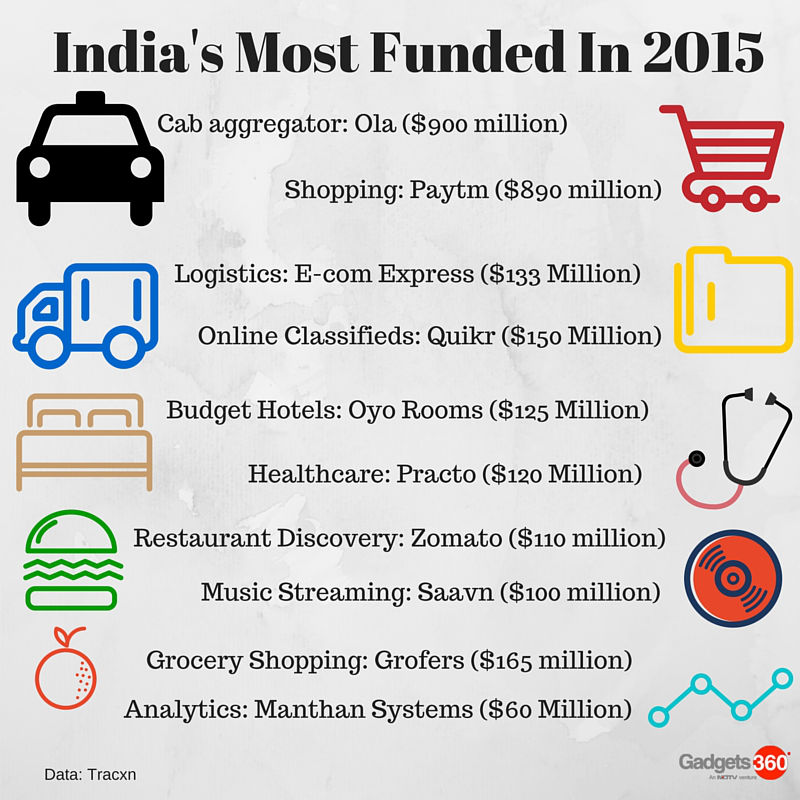 16) Delhivery
Gurgaon-based Delhivery is a logistics solutions provider for e-commerce companies owns and operates its own fulfillment centers, and is capable of fulfilling orders in a time-span of less than three hours. Its pan-India express delivery network is backed by in-house fulfillment and transportation management systems, customer analytics, geo-coding and route optimisation, and can enable delivery to customers within 12-48 hours.

17) Freecharge
Sequoia-backed FreeCharge offered recharge for prepaid mobile, postpaid bills, data cards, and DTH, when it was acquired by Snapdeal in April 2015. FreeCharge launched its own digital wallet for making transaction across FreeCharge and Snapdeal platforms in September 2015, and claims a user base of 10 million wallet users.

18) Bankbazaar
BankBazaar is a consumer-focused online marketplace for financial products, offering comparison tools and instant quotes for choosing loans, credit cards, and insurance. The company claims to have served over 50,000 customers, and works with over 35 partners.

20) Netmeds
Online pharma aggregator Netmeds.com raised $50 million (roughly Rs. 324 crores) in funding led by OrbiMed, a healthcare-dedicated investment firm in October. You can use Netmeds to get medicines delivered from your local pharmacies. Netmeds has apps on the App Store and Google Play, and delivers across India on a cash on delivery basis.

21) Antuit
Big data startup Antuit generates business insights out of all forms of relevant business data using advanced analytics and visualisation techniques. Headquartered in Singapore, a majority of the team is based out of Bengaluru, with offices in Seattle, Auckland, and New York.

22) HomeLane
Homelane offers interior design solutions for homes, with a tech based portal that offers 3D visualisation features. The website boasts of over 500 interior designers in six cities, and promises delivery of the designs you choose in six weeks, with a five year warranty on purchases.

23) Urban Ladder
Urban Ladder claims to be India's leading online furniture and home décor company, and aims to be a one stop shop for everything a user needs to make their home beautiful. The three-year-old startup has raised $77 million (roughly Rs. 513 crores) in funding from top tier venture capital firms and investors.