Here are 800 Flappy Bird alternatives that are not simple clones

Over the weekend, a new Rs. 55 game launched on the iTunes App Store - Flabby Bird HD. After the meteoric rise - and sudden end - of Flappy Bird, what started off as a single, flawed game quickly became an entire genre.

Critics did not like the game but the public certainly did and developer Dong Nguyen said he was earning up to $50,000 per day via in-app ads. In less than a month though, Nguyen took the game down, saying, "I am sorry 'Flappy Bird' users, 22 hours from now, I will take 'Flappy Bird' down. I cannot take this anymore... It is not anything related to legal issues. I just cannot keep it any more... I also don't sell 'Flappy Bird', please don't ask... And I still make games." He later stated that the game was "too addictive."

With the game gone, it wasn't a surprise that others rushed to clone it and make a quick buck. Flabby Bird HD has the following description on the App Store: "Want to know the real reason why the original flapping sensation retired from aviation? Because it's become FATTY and FLABBY from eating too much CHOCOLATE! And overfed, overweight and overconfident rendition of the popular aviator returns!"

That description might make you think there's some connection with Nguyen's game, but that's not the case. Flabby Bird was in fact released by a company called Memoriki, which has mostly made a quiz app in multiple languages.

While the cloners kept building apps and trying to make a fast buck though, something very interesting happened as well. Developers around the world closed ranks to offer support to Nguyen who claimed he was suffering intense stress ever since Flappy Bird became a hit. The result was a movement called Flappy Jam where game developers could submit free Flappy Bird-inspired apps to show their support for Nguyen. 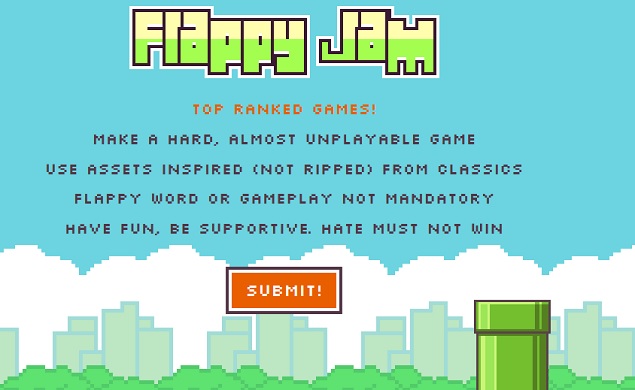 At the same time as the launch of Flabby Bird HD, Flappy Jam also came to a close, with just about 800 entries. Most of these games are the polar opposite of the clones flooding mobile app stores.

Some of the biggest names in the mobile game space participated, including Terry Cavanagh, who is most famous for his game Super Hexagon, and also Adam Saltsman, the creator of the runaway hit Canabalt. Some of the ideas are really unexpected, like a text adventure game. Others are simple reskins. But we tried out the various entries, which are available here and found some favourites.

Terry Cavanagh's Maverick Bird is both obviously a riff on Flappy Bird, and also completely unique. Using Cavanagh's typical style in art and music, the gameplay is almost the same as Flappy Bird, but Cavanagh added a dive button which reworks the mechanics dramatically. Flappy Bird was a game about careful timing, but thanks to the music, the neon colours and the dive button, Maverick Bird is frenzied and gets your pulse racing. 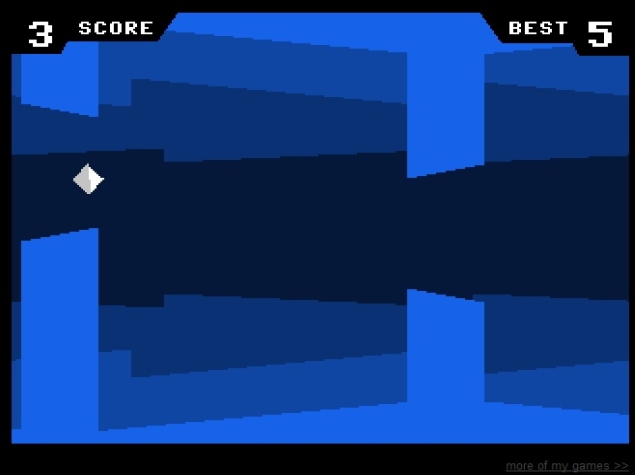 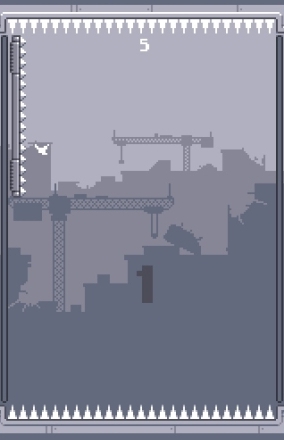 Flappybalt by Adam Saltsman also bears its creator's signature style, and changes the rules to create something unusual without changing the formula much. You still flap around in the same way before, but now you're flapping in a small room with spikes on the walls that you have to avoid. The grey background and art are from Canabalt, and all that's missing is the music of that game.

Oh My Gravity is another great game, with stark art that stands out from the crowd. Gravity (the movie) would've been a lot shorter if surviving it was as hard as this game, but it would still have been captivating, that's certain.

There's even a version of Flappy Bird which has been recreated with a first person view for using with an Oculus Rift so players will be able to experience the joy of bouncing headfirst into a pipe repeatedly.

What these games prove is that great art can come from simple ideas. And that we - the customers - should show our support to artists trying to make something new, instead of the 50th clone of a game which doesn't go beyond changing the look of things minimally.