Google Go App: How Is It Different From the 'Main' Google App? 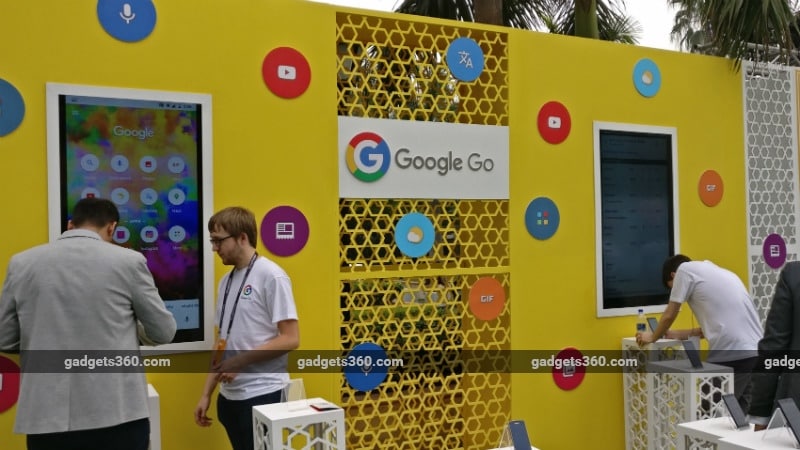 At the Google for India 2017 event in New Delhi on Tuesday, the search giant released the Google Go app, a streamlined version of the original Google app. The new app is touted to make discovering, exploring, and sharing on the Web "easy and fast", and will come preloaded on Android Go devices. It also comes in less than 5MB of file size that makes it suitable for devices with lesser internal storage. We put the app to the test to see how it measures out, and whether it is a good enough option. Here our first impressions that highlight all the key features of the Google Go app, and how it is different from the flagship Google app.

As Google VP of Engineering Shahidhar Thakur stated at the sidelines of Google for India, the prime aim of developing Google Go is to help new smartphone users "come on the Internet", and help them access the Web easily. "We gathered feedback from 100 of Indian cities to make the power of the Internet accessible for new users through Google Go," said Thakur. Unlike the original Google app that uses system's default language, the Google Go app allows you to choose an additional language apart from English, in order to search in a localised way. There are language options like Bangla, Hindi, Nepali, and Punjabi, among others. The app also has some international languages such as Afrikaans, Deutsch, and Filipino. There is also a language "chip", which is a one-tap button available at the bottom of the search results that helps you switch from default English results to the ones in your preferred additional language.

In addition to the additional language support, the Google Go app has a Data Usage feature that, once enabled, helps you to load a lighter version of webpages using Google's Weblight project. Google says that the app is designed to consume 40 percent fewer data. During our testing on a 3G network, we found that the app generates search results in a couple of milliseconds. We also noticed the reduced impact on memory after switching from the original Google app to Google Go. While the flagship app consumed over 330MB memory on average in three-hour span on our Oreo-running smartphone, the lightweight Go version used merely 32MB in the same time frame and on the same device.

As Google Go is primarily targeting the users who are new to the Internet, it has a simple, "tap-first" interface that doesn't require much typing on the screen. There is a unified screen that welcomes you with major Google services such as Search and Voice search. There is a search bar near the bottom of the screen, with a dedicated button for voice search. Tapping on the search bar shows what's all in trend at the moment. This means that you don't need to type any trending topic, and just a tap takes you to its Web results.

Tapping on the search bar shows what's trending at the moment. This means that you don't need to type any trending topic, and just a tap takes you to its search results. The app also allows you to share your searches with a single tap. Likewise, your search history is available in the form of chips just alongside the Share button. If you want to get notified of updates to your search results, the app also has an option to send you push notifications. This means you can get real-time updates on topics that are developing, such as election results or cricket scores.

Apart from that, there is also access to Images and GIFs that you can share with your friends with a couple of taps. Similarly, you can access YouTube, Weather, Google Translate, or Maps directly from the Google Go home screen. The app opens the relevant apps if they are already installed on your device. Otherwise, it loads their Web versions natively.

If you don't want to access any Google services, Google Go also has shortcuts of popular websites, including Facebook, Instagram, and Twitter. Once again, these shortcuts take you to the sites directly from the Google Go app or open the third-party apps if they're installed on your smartphone. You can also replace these shortcuts with your favourite sites, just like you can change the homepage items in Chrome browser. Additionally, the app lists categories such as Social, Entertainment, Sports, News, and Shopping; each of which has different sites.

The overall user interface of Google Go is sleek and clean, with circular icons - matching the default icon pack on Android Oreo - and a light theme. You can also customise the experience a bit by adding your custom app background.

All in all, Google Go is a must-have app for all first-time smartphone users. It neither consumes a lot of storage space nor spends a large amount of data. Yet, the app offers a one-stop solution to search online as well as access various Google services and sites like Facebook, Instagram, and Twitter with few taps on the screen - without typing much through a virtual keyboard. The available additional language support also brings the Web world closer to all non-English speaking mobile users.

You can experience the changes for yourself by downloading Google Go on your Android device from Google Play right now. The app is compatible with devices running Android 4.3 and above and is initially available as a preview in India and Indonesia.

We discussed Google's announcements for India, including Google Maps' two-wheeler mode, Android Oreo Go, and Google Tez on Orbital, our weekly technology podcast. You can listen to it via Apple Podcasts or RSS or just listen to this episode by hitting the play button below.

AI, Machine Learning to Be Used by Hackers in 2018: Symantec
YouTube India Reveals Its List of Top Trending and Music Videos of 2017