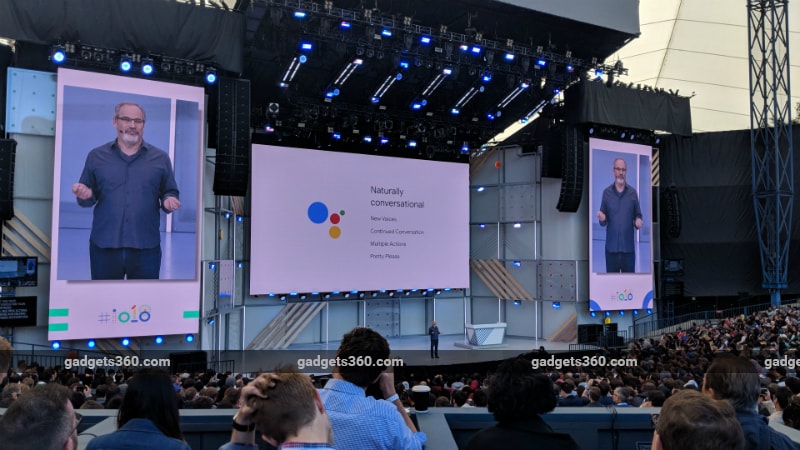 Google Assistant is now available on 500 million devices globally, Scott Huffman, Vice President of Google Assistant revealed at the Google I/O 2018 keynote. He added that daily usage of the service has tripled in India since the beginning of 2018. Assistant will support 30 languages and be available in 80 countries this year. "Our vision for the perfect assistant is that it's naturally conversational, it's there when you need it so that you can get things done in the real world," said Google CEO Sundar Pichai at Google I/O 2018 talking about the various new features that the tech giant is bringing to Google Assistant. Let's have a look at all the new updates coming to the virtual assistant.

New voices
Google's Wavenet technology is bringing some more improvements to Google Assistant, using raw audio to create system voices that sound more natural and human-like than before. Assistant has now added six new voices thanks to Wavenet. "Our goal is, one day, to get the accents, languages, and dialects right globally," said Pichai. As part of Wavenet, American singer-songwriter John Legend will also be coming to Assistant later this year, "for certain contexts".

Continued Conversation
Triggering the Google Home smart speaker range with hotwords like 'Hey Google' and 'OK Google' has long been one of the most common pet peeves for users. With the announcement at I/O 2018, you can now have a more natural conversation without having to trigger the commands after every sentence with Assistant, and it will also be able to distinguish between when you are talking to it or to another person. The feature will roll out in the "coming weeks".

Multiple Actions
Rolling out on Assistant now, Multiple Actions allows Google's virtual assistant to perform simultaneous actions in the same voice command, using coordination reduction to figure out exactly what the user means even with longer commands. For instance, users can ask it to set a reminder and play a stream in one voice message.

Pretty Please
Much like what Amazon did with its recently launched Amazon Echo Dot Kids Edition, Google Assistant is adding skills that compliment and provide positive reinforcement to users (especially kids) when they converse with the Assistant using polite words like Please and Thank You. Assistant also features free family-friendly content that includes games, activities, and stories from Google's partners such as Disney.

Smart Displays
Google Assistant was unveiled on Smart Displays back at CES 2018, and at Google I/O 2018 the company announced the launch timeline. While voice commands will still remain the key feature of the virtual assistant, users will be able to access the screen for added convenience. With the displays, you will be able to watch live streams, control your smart home, and make video calls using Google Duo. In partnership with OEMs like JBL, LG, and Lenovo, Google's first Smart Displays will be available for sale starting July.

New visual experience on smartphones
Google is partnering with several service providers to incorporate features right into Assistant. Google Keep, Todoist, Any.do, and other note-keeping services will be available on Google Assistant so that users need not have to open the apps to use them. Further, Google has also tied up with Starbucks, Doordash, 7-Eleven, and Applebee's in the US to offer a chat-style delivery and pick-up interface for food orders.

Additionally, Assistant will now provide a snapshot of the day's summary customised for users, by swiping up on the Google Assistant app. This will include reminders, directions, and other contextual cards. The update will roll out on Android this summer and iOS later this year.

Google Maps
Assistant is also coming to navigation in Google Maps, in a possibly discreet manner. Users can use voice commands to trigger actions such as play music, send text messages, and get information, all without leaving the navigation screen to avoid any kind of distraction while you drive. This feature will come to Google Maps this summer.

Google Duplex
One of the highlights of the Google I/O 2018 inaugural keynote was Google Duplex. The tech giant's new technology has the ability to respond naturally to a phone conversation by using complex sentences, fast speech, and long remarks. For instance, if you make a reminder for a salon appointment for a particular date at a specified time, Assistant will - using Duplex - contact the salon and make a reservation using the information available.

"Our research shows that 60 percent of small businesses who rely on customer bookings don't have an online booking system. And many people simply don't reserve with businesses that don't take online bookings," said Scott Huffman, Vice President, Google Assistant, in a blog post detailing the need of Duplex for businesses reliant on phone bookings. The first tests of the new system will start this summer.

We discussed the most important things that Google did not mention during its I/O 2018 keynote, on Orbital, our weekly technology podcast, which you can subscribe to via Apple Podcasts or RSS, download the episode, or just hit the play button below.