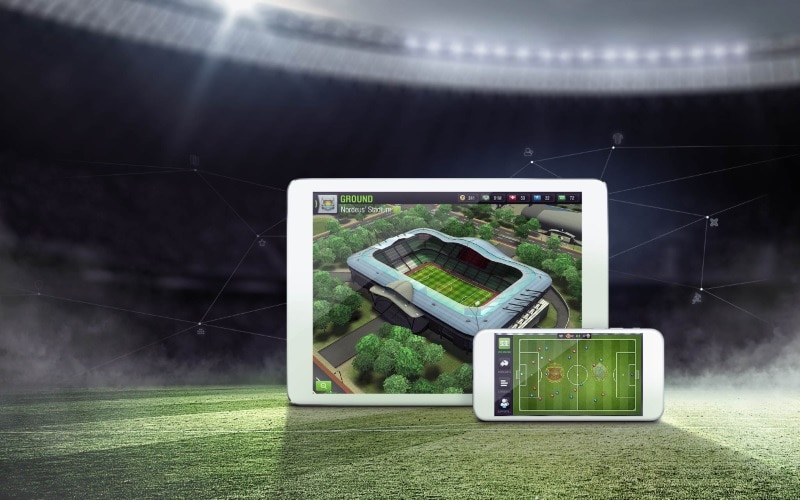 Not all of us football fans have the liberty to spend time gaming at home, but do have long commutes which can be better utilised. That’s where mobile gaming can be of help, and in 2016 there are at least half a dozen decent options to fill your time. Be it casually flicking the ball towards goal or racking your brain to manage tactics, squad, and transfers, there is something for everyone in the world of mobile football games.

The obvious choice for most mobile converts is EA Sports FIFA, which got a big new update this week, introducing modes that emphasise attacking and competitive gaming with your friends circle. If you're looking for alternatives, here are the ones we love:

1) Top Eleven 2016
One of the oldest kids on the block, Top Eleven has gradually grown to become possibly the most played title on mobile. Developer Nordeus claims 100 million players worldwide, and it’s got enough marketing budget to rope in Manchester United’s José Mourinho.

As for the game itself, there isn’t any on-the-pitch action. Top Eleven is about being a manager (hence Mourinho’s involvement) and that means running the club. You’ve to bid for players, think tactics, build a world-class stadium, and then challenge other managers to win games. Top Eleven also lets you build your own football association, and invite your friends to compete.

It’s even got two dozen licenses, from the likes of Arsenal in the Premier League, Bundesliga’s Borussia Dortmund, Juventus in Serie A, and La Liga’s Real Madrid.

2) Score! World Goals
Instead of giving you the keys to a game of football, Score! World Goals has a narrow focus: recreating goals, be it domestic leagues, European cup nights and even the World Cup. All this, with just the flick of your fingers.

Fans appreciate the game’s minimal learning curve and barebones mechanics – which lets the gameplay focus entirely on setting up goals from running past defenders to putting sweet volleys past the goalkeeper. Score! World Goals has commentary, mo-cap animations, and even a multiplayer mode.

3) Football Manager Mobile/ Touch
Sports Interactive’s Football Manager franchise has long been the mainstay for dedicated managers. And when we say dedicated, we mean people whose lives tend to revolve around the game. So it was only natural that the brand would move onto devices and ecosystems that people carry with them everywhere they go.

There are now two versions of Football Manager available for mobile devices, in Football Manager Mobile and Football Manager Touch. Both are single-player only, and offer the same modes too – Career, Create-A-Club, and Challenge. Mobile is for the (comparatively) casual crowd, offering faster progress with less depth, while Touch provides the exact opposite.

That even reflects in the number of players, staff, and leagues available in-game, with Mobile coming in at 11,000 people across 40 leagues in 14 nations. Touch, meanwhile, offers 26,000 to 190,000 real footballers and staff in a total of 137 leagues spread over 51 nations. Other differences include the presence of 3D match simulator in Touch, and cross-play functionality across your mobile and desktop devices.

4) Flick Kick Football
Technically speaking, Flick Kick Football is the football version of Paper Toss. For those who have never played the classic crumbled paper ball into a trash bin, all you need to do is swipe and flick the ball towards the goal. And as the difficulty increases, you will have to put spin on the ball.

The game has other modes too – you can practice your skills in well, Practice Mode, hit the targets in Bullseye Mode, race against the clock in Time Attack, and even go multiplayer if you like.

Instead of spending money acquiring licenses, developer Pikpok has taken the game to its “Golden Era”, which has allowed it to not care about the same. Hence, you will find high-waist shorts, moustaches, and 60s hairstyles.

5) PES Club Manager
Konami makes one of two credible football games on desktop, and its mobile counterpart – PES Club Manager – is one of the few to offer 3D matches on your phone. It’s simulation-based though, so you’ll need to get your tactics spot on to win games. And what it lacks in sheer gameplay it delivers in graphics – the match simulator draws on the same game engine from Pro Evolution Soccer on consoles.

PES Club Manager has over 5,000 licensed players from around the world, be it South American leagues, or the likes of Bayern Munich and Paris Saint-Germain. The game has a huge download size though, at 1.23 GB, so keep that in mind before you take to the pitch. The latest update, in September, brought in the European Championships alongside more daily and weekly achievements.

6) Soccer Stars
Of all the games on this list, Soccer Stars has the oddest take on football, borrowing elements from air hockey and foosball. The game is meant to be played online, and even allows you to login with your Facebook account to take on your friends.

Soccer Stars is meant to be a pick-up-and-play game, so it’s easy to learn and still manages to offer fun in the long run. There are no real footballer likenesses on display, though you can collect the different colours of clubs (such as FC Barcelona, and Liverpool) and countries (Spain, Brazil, and more) to show off your support.

What is your favourite football game on your mobile device? Let us know in the comments below or tweet to us @Gadgets360 with #footballapp.