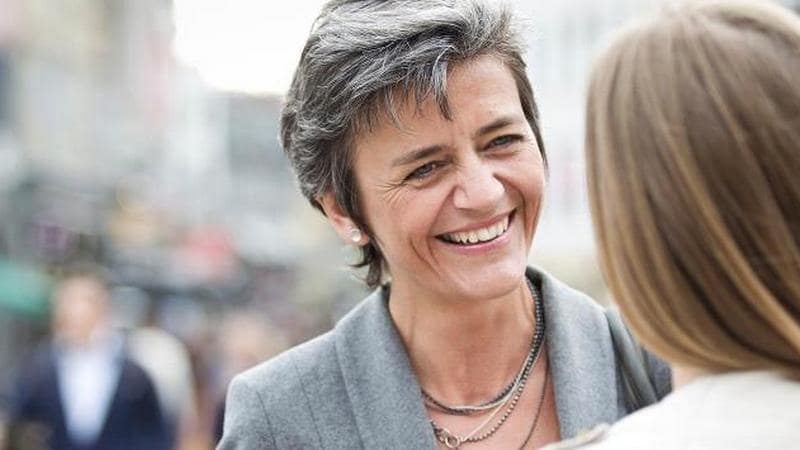 Her tough stance towards US firms has earned her the ire of President Donald Trump, but the EU's antitrust chief Margrethe Vestager is showing no signs of backing down.

The Danish former minister on Wednesday unveiled a record EUR 4.34 billion ($5 billion or roughly Rs. 34,300 crores) fine against Silicon Valley giant Google in the latest of a string of cases targeting American businesses.

Such is her high profile that Trump reportedly told Vestager's boss, European Commission chief Jean-Claude Juncker, at a recent G7 summit that "Your tax lady... she really hates the US".

Vestager, 50, took a typically wry but exact approach when asked about that at a press conference on Wednesday.

"I've done my own fact checking on the first part of that sentence, I do work with tax and I am a woman so this is 100 percent correct," said Vestager, who donned a yellow, blue and red kimono dress in the Google logo's colours for the announcement in the European Commission's drab headquarters.

"This is not correct for the latter part of the sentence though, because I very much like the US... But the fact is that this (case) has nothing to do with how I feel, nothing whatsoever."

'Hugely respected'
The list of companies that have come under Vestager's scrutiny since she took over as EU competition commissioner in 2014 reads like a rundown of America's biggest businesses: Amazon, Apple, Google, Starbucks, and McDonalds.

The gigantic 13 billion euros that she ordered Apple to pay in back taxes to Ireland in 2016 grabbed headlines worldwide, as she gained a reputation as a champion of critics of Silicon Valley.

Despite her thunderbolts, Vestager is known in Brussels for infusing one of the EU's most feared positions with a much needed dose of humanity.

Vestager's vast, bright office in the commission's Berlaymont headquarters is covered with photos of her three daughters, while her small desk faces out to the Brussels skyline.

"She's loved by her team, and hugely respected," said a high-level Brussels official familiar with the often austere corridors of EU power.

In an interview last year with AFP, Vestager spoke of her antitrust portfolio matter-of-factly, but became animated when describing how she thought Europe had grown stronger from the drama of the debt crisis and Brexit.

Vestager was at one time best known for inspiring her country's hit television political drama "Borgen" about a female prime minister.

She developed a taste for Europe's potential when she was the Danish economy minister, chairing meetings with her colleagues during the grim depths of the eurozone debt crisis.

"You set the agenda, you lead the meetings... and I really liked it," Vestager said.

'Margrethe III'
But she has now brought a huge change to the grey and insular world of antitrust competition law.

"I think its a good thing that I'm not a lawyer... because I'm never tempted to be a better lawyer than the lawyers," said Vestager, who studied economics at Copenhagen University before embarking on her political career.

It is this desire to always think of the voter and headlines that bothers her critics who see Vestager as too political for the antitrust portfolio.

Sometimes nicknamed back home as "Margrethe III," an allusion to Denmark's Queen Margrethe II, she became minister in 1998, named at 29 to the education and ecclesiastical affairs portfolio, and over the years rose up the ranks.

But observers in Denmark say her options back home are limited, having already won all the top jobs - including deputy prime minister - that are available to her small social liberal party.

Unsurprisingly, Vestager hinted that she would like to stay on in a Europe-wide role, with some wondering whether she could one day replace Juncker himself.