Meet the Developer of Calzy, the First Indian App to Win an Apple Design Award 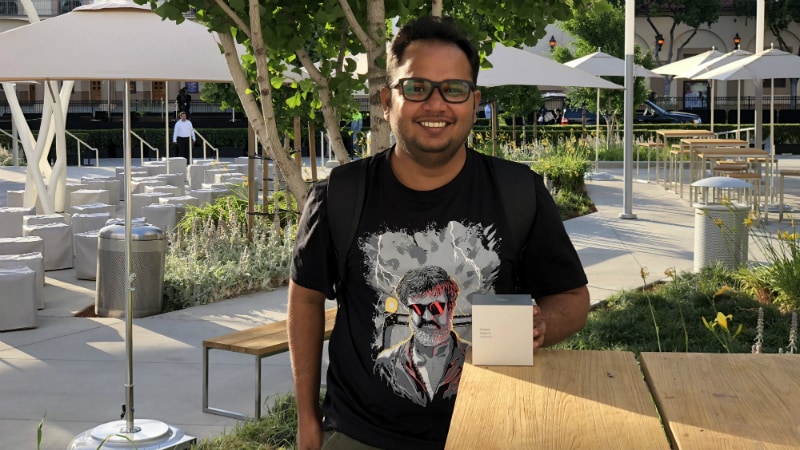 A simple, no-nonsense calculator for iPhone and iPad, called Calzy 3, is the first ever app from India to be recognised at the Apple Design Awards, the annual event held at the sidelines of Apple's developers conference. The ADA, as they are often called, recognise apps that make innovative use of technologies across Apple's platforms.

Calzy 3 offers a clean user interface but doesn't skimp on any major features - it offers dark/ light modes; has an advanced mode for scientific calculations that's hidden by default but can be easily summed up; and a cleverly implemented memory functionality. Calzy 3 is an app that not many iOS users know about, but it made the shortlist of the 10 apps that Apple recognised at this year's ADA.

Gadgets 360 caught up with Calzy 3 developer Raja Vijayaraman at WWDC 2018 in San Jose to get some insights around his app development journey thus far.

"This is my first time at WWDC and in the US," says Raja. "I didn't know what was going on and that I was winning the award, it was a complete surprise! I thought the WWDC invite was a regular meeting considering I am an app developer."

Raja, an independent app developer from Chennai, is passionate about developing apps for Apple devices. "I'm from the visual effects background, so I learnt the programming language with my first app (Pick) back in 2010," he says, explaining how he got started on his journey. "From VFX industry, I jumped into this [app development]. During my first stint working on a couple of movies, I got my first iPhone - the iPhone 3GS. It was a huge jump from Nokia, and I went online to see how these apps are made. I signed up for the $99 Apple developer program and started learning how to code and design apps."

"In 2014, we launched the app, but only recently I released a redesigned version with Swift language. This is version 3 of the app," he says, emphasising how Calzy 3 is the app's biggest upgrade and the reason he ranked among the developers with the best-designed apps.

The app has its own take on the "Memory +" functionality that most calculators implement because Raja didn't want to go down the traditional route.

"I used to get a lot of requests asking for the memory functionality," he explains. "I [initially] didn't want to implement that because I saw Calzy as a day-to-day calculator app. I have never used memory features in my own experience. But, when iOS 11 came about, I saw the possibilities and released my take on the feature," The feature can be used to simply drag and drop results to the top of the app and save them for future use.

Simplicity is Raja's key focus for Calzy. "I'm happy with the current state of the app. However, users have requested a graphing feature. While I want this to be a regular calculator app, if I find a way to implement it in a simpler and cleaner way, I will."

What is a bit more unlikely is the release of an Android version of Calzy anytime soon. "I have been using iPhone for a long time and I'm used to that design language," Raja says. "I'm a hardcore iPhone user and I don't know much about Android app development."

One of the best features that Calzy 3 offers is keyboard customisation. Jumping into Keyboard Layout via the Settings lets users drag and drop all the keys on the calculator and rearrange them as per their preferences. This involves moving around numbers, functions, as well as adjusting their text size.

Calzy 3 has a neat UI that is high on functionality

The app's iMessage integration is also pretty neat. "Imagine you are having a conversation with your friends in iMessage, and are planning a trip. You don't have to close the conversation and go to the calculator app," Raja explains. "You can calculate everything right from the Calzy 3 iMessage extension. You can also send the result with different labels."

Another highlight of the calculator app is how every advanced feature is hidden by default and is accessible via things like 3D Touch. The developer states that you can easily switch between calculator modes without the hassle of shifting to landscape mode.

There's also a nifty tax calculation shortcut on the app that Raja says was implemented after GST (Goods and Services Tax) became the buzzword in the country. Apart from that, Calzy 3 offers a privacy mode that can help users protect their bookmarked results using Face ID and Touch ID, and the implementation is commendable. Calzy 3 is available on iPhone, iPad, Apple Watch, and with Apple announcing an easy way to port iOS apps to the Mac will be available to third-party developers from next year, you can be sure Calzy will be on the Mac as well.

However, pricing is an issue that plagues the developer's growth, though Raja says he is happy with the what the app makes on the App Store. Calzy 3, like other apps from WapleStuff, has a price tag of Rs. 159 on the Indian App Store ($1.99 in the US), which is a hindrance for a market that loves to devour free apps. "My users are mostly from US, China, and European countries. India is not on top of the list," says Raja, though admits he's not spent much effort marketing the app.

"I just design, develop, and publish the app, I don't focus enough on marketing or reaching out to the press," he says. Apple's app accelerator, which started in Bengaluru last year might be able to help change that with plans now to help developers market the app, in addition to development.

Hopefully the recognition that the Apple Design Award brings will be enough to make Calzy even more popular, but that's not the only perk of being an ADA winner. All 10 winners from this year will receive an iMac Pro, a 15-inch MacBook Pro, a 256GB iPhone X, an Apple Watch Series 3, and a pair of AirPods - basically, the flagship model of every hardware product that Apple sells. Hopefully, customs clearance is not an issue when Raja Vijayaraman returns back to India after a wondrous WWDC for him and his country.

Amazon India to Install Solar Rooftops at Fulfilment, Sort Centres
Final Fantasy VII Remake for Xbox One Listed for Pre-Order, May Not Be Exclusive to PS4