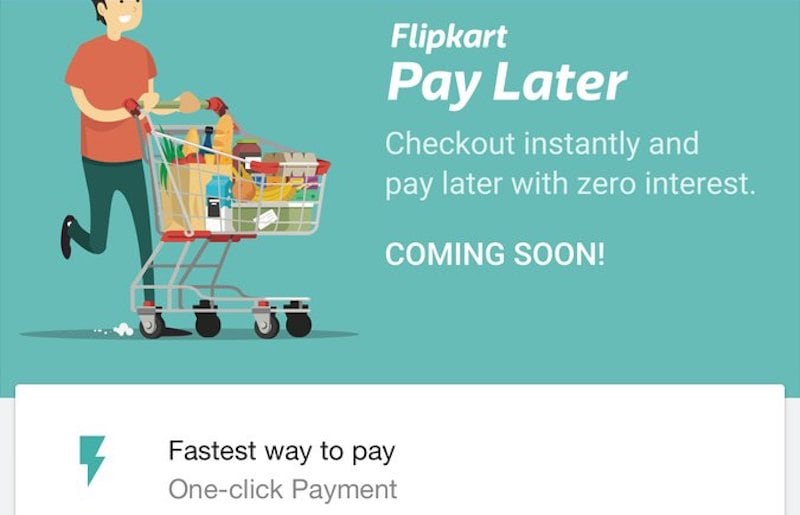 Buy now, pay later. That is steadily becoming the order of the day. IRCTC is perhaps the biggest name to have recently added this feature thanks to Mumbai-based pay-later service ePayLater, though it’s far from the only one. In the past, we've talked about startups like Simpl that enable this service, and about similar offerings from big companies, such as LazyPay from PayU.

The idea behind these services is simple - it's a form of credit loan where you can purchase a product, and pay for it later at a fixed date. That's what you do with credit cards as well, but here the credit is being given by the fintech companies, and the limit is pretty low, usually just a few thousand rupees. Typically, you need to settle your account every two weeks.

Some of the biggest consumer brands in India are also getting directly involved in this business now, and that's got the potential to really bring buy now, pay later services to the mainstream.

A couple of months ago, Flipkart launched a feature called Flipkart Pay Later. With this, at checkout, you can choose to pay later and instantly complete the order. You don't pay on delivery either - instead, all your Flipkart bills get consolidated, and you can pay them online at a later date, after receiving your products. An additional benefit to this is that since you haven't actually made the payment before getting a product, refunds can be instant, as it just means adjusting your pay-later bills.

Flipkart has been rolling out Pay Later at a slow pace, to select users across India. Gadgets 360 reached out to the company to learn more about the users who’ve already received the feature and how many people are making use of the service, but as of now, the company has not responded.

Aside from Flipkart, another major online company in India that has launched its own pay later service is Ola. Typically, if you're an Ola user, you can use cards, Ola Money, or cash to pay for each ride. Ola has another feature that lets you autofill Ola Money, but a new feature lets you follow the postpaid model with your Ola rides.

Called Ola Credit, this feature was launched in the wake of the demonetisation initiative last year. On Ola's blog, Ola Credit is described as a "premium offering", extended only to "Ola's loyal user base", but if you're interested in getting access to Ola Credit and don't see the option in your app, click on this link from your phone with the Ola app installed to get the option.

Ola Credit has a seven day cycle, after which you have to clear the payment to keep riding. The credit limit varies per user, based on your usage and, presumably, repayment history.

Aside from these two companies, other Indian online giants are also open to the idea of deferred payments. BookMyShow works with Simpl, as does popular food delivery service Faasos. LazyPay is available as a payment option to select users on Zomato.

In other words, you can now eat (Zomato, Faasos), travel (Ola, IRCTC), and shop (Flipkart) now and pay later.

Fighting cash on delivery
So why does this matter? Even in a post demonetisation world, cash is the most popular payment method for most online services. But cash on delivery is expensive in terms of logistics for companies, and going digital makes it easier for them to handle money and manage leakages. Buy now, pay later systems can help address the first part of the problem, and through the use of AI and ML systems, companies will work to generate dynamic limits based on your repayment history, so even if there are leakages, the amounts lost can be kept in check.

In an earlier meeting, BookMyShow design head Anish Tripathi told Gadgets 360 that payments is an essential part of any online business, and buy now, pay later services like Simpl allowed customers to book tickets without any fear of complicated refunds in case of cancelation.

Flipkart had noted that demonetisation did not have a huge impact on orders, showing that many customers opting for cash on delivery already had access to debit cards and other means of online payments. In that case, why were people still preferring to pay in cash?

The fact that you can pay for a product after it arrives is a big incentive, so you aren't worried about your money getting "stuck", is a huge factor, multiple people told Gadgets 360. If that's the case, a pay later service also solves the same problem, as it allows you to buy product, receive, and even start using them before you need to pay.

This is why pay later services look quite promising, and could help increase the number of people making digital payments, while keeping retaining the best feature of cash on delivery.

With Torrent Sites Facing the Heat, Pirates Get Creative With Google Drive and Other Services