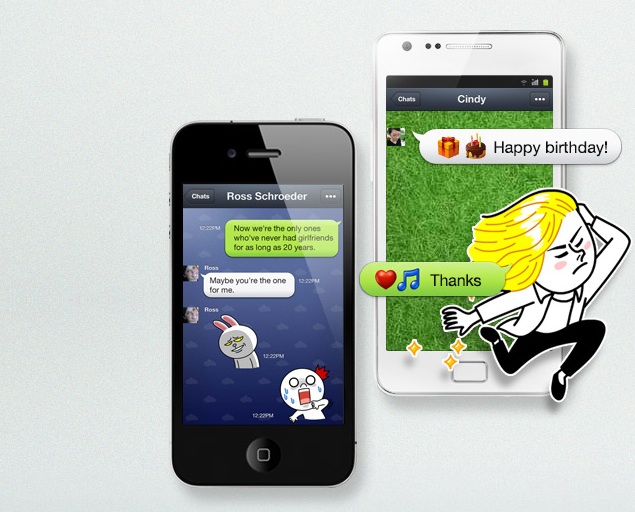 Where these internet and telecoms giants once controlled the lucrative choke points of the industry, social messaging services are fast emerging as an alternative distribution channel for adverts, apps, and goods and services.

For example, Tencent Holdings' WeChat allows its more than 270 million active users to book taxis, top up phone credit, and even invest in wealth management products, while Naver Corp's LINE recently launched flash sales via its app in Thailand, with more than 5 million users signing up to buy L'Oreal lipstick and other products.

The growing role of such apps as distribution channels was acknowledged by Japanese billionaire Hiroshi Mikitani when he explained why his company Rakuten Inc bought messaging company Viber last week for $900 million. "In some smaller emerging markets, it was very difficult for Rakuten to go in because of the lack of scale or distribution infrastructure. But after the acquisition of Viber we can now go into those markets with our digital businesses."

Making Money
At the heart of the battle is how to make money from the world's billions of mobile phone users.

Traditionally, it was carriers who took in the revenue from voice and SMS messages - and more recently from internet usage. Income, however, has been hurt by so-called over-the-top players such as Google and Facebook, who make most of their money from advertising.

Then there are the app stores, where users find and download apps. Although many of these are free, users are encouraged to add features which they pay for within the application. Google's Play store and Apple's App Store, the two largest, deliver these apps and handle all payments, taking a 30 percent cut along the way, some of which they may split with the carrier. In some countries, other app stores dominate, particularly China, where Google doesn't operate its online store.

These platforms are not only a source of revenue, but also effectively control access to the end-user. Apple said users spent $10 billion on its App Store last year.

But the growing popularity of mobile messaging apps is changing this.

More than half of all smartphone users are active users of such apps, according to Analysys Mason, and the volume of messages has already overtaken traditional SMS short messages, and will double again this year.

Riding this wave are dozens of companies peddling mobile messaging apps, with some able to gather a critical mass of 100 million users or more. By offering compelling mixes of chat, downloadable icons and games, LINE, KakaoTalk and WeChat have emerged as some of the most popular in Asia. Now these apps are leveraging their networks to become gatekeepers of their own.

Take South Korea, for example. In Google's app store there seven of the top-10 grossing apps are Kakao-branded, according to App Annie, a company that measures app usage. Kakao promotes them to users of its apps and takes a cut from the developer. While Google and the carriers get their 30 percent, Kakao takes another 21 percent. With KakaoTalk on around nine of every 10 South Korean smartphones, it's an easy, albeit costly, way for game developers to be noticed.

WeChat, or "Weixin" in China, meanwhile, has taken its home market by storm, and Shenzhen-based Tencent is throwing itself into monetising the app, going well beyond selling users emoticons - called stickers - and extra lives for games and into e-commerce and banking.

When WeChat let users send traditional Chinese New Year gifts of money through their smartphones, a survey by market research firm Ebrun this month found it had been key in users adopting WeChat's payment service: 74 percent of users surveyed had connected their bank account to their WeChat profile.

"This is really exciting," says Bertrand Schmitt, Beijing-based CEO of App Annie. "It's like building a new platform on top of platforms."

Big at home, but...
To be sure, none of these companies is about to seriously challenge the big players. All three dominate at home - LINE in Japan, KakaoTalk in Korea and WeChat in China - but are still battling to win the same degree of loyalty in other markets.

A survey by OnDevice, a mobile market researcher, showed WeChat was installed on most respondents' devices in China, but LINE was on only 5 percent and KakaoTalk on only 3 percent. Tencent owns 13 percent of KakaoTalk owner Kakao. None of these services was on more than 10 percent of devices in the United States.

Outside China, all three need to work for now with Apple and Google.

"I don't think they threaten app stores and operating systems, not yet anyway," said Sameer Singh, an analyst based in Hyderabad, "because the platform owner still retains control over developer activity."

Nevertheless, those watching the shift see it as just the latest in a series of disruptions.

"This is why Microsoft feared Netscape, why Facebook feared Instagram, why AT&T lost to Apple, and why Apple was worried about Google Maps: in each case a platform was inserting itself between the existing platform layer and the users," said Marshall Van Alstyne of Boston University.

"Once it spreads widely enough, it controls the interaction and becomes the strategic bottleneck. The social networking sites are in a strong position to do this with respect to other platforms. If you can control that user interaction, you can control the revenue streams."

In most Asian countries, the mobile phone has been most people's main, if not first, internet device. And in China, local players quickly filled the void left by Google to build app stores and payment mechanisms on phones running Google's Android operating system.

"All the markets outside the West are experimenting with this and perfecting this," said Dmitry Levit, an investor in social messaging service mig33, which recently listed in Australia through a reverse takeover .

"North Asia just created a perfect storm of a vast, relatively young population, a little bit of expendable income that is perfectly fine for a few sticker packs and relatively well distributed payment systems," he said.

Disrupters disrupted?
Beyond North Asia everything is still up for grabs.

LINE and WeChat are investing heavily in marketing to push beyond their strongholds. LINE said its marketing expenses more than trebled year-on-year in the last quarter and are likely to remain at similar levels this year.

Getting users to install the app is one thing. Monetising is another. The emerging markets of South and Southeast Asia lack easy and cheap ways to make small payments over the phone, something all messenger players are going to have to figure out, probably through deals with operators.

"It took us more than 5 years to charge users on prepaid cards," said Thomas Clayton, Singapore-based CEO of Bubbly, a social network that focuses on getting celebrities to use the service as a promotional tool. "I wish I had the monetisation they have because we have the billing capability, but nothing like the big monetisation model they have."

And the disrupters, of course, risk being disrupted themselves.

Game developer Electronic Arts Inc CEO Andrew Wilson said in December his company was looking to launch some of its products in South Korea outside the Kakao network to avoid "what we see as a second-tier tax of Kakao."

And other social networks are waiting for a shakeout in the industry, arguing users will not accept lots of different channels on their phone.

"Our problem is trying to figure out who's going to win the war," says Bubbly's Clayton. "We don't have the bandwidth to work with all three of them and it's hard to figure out which is going to be the ultimate winner."