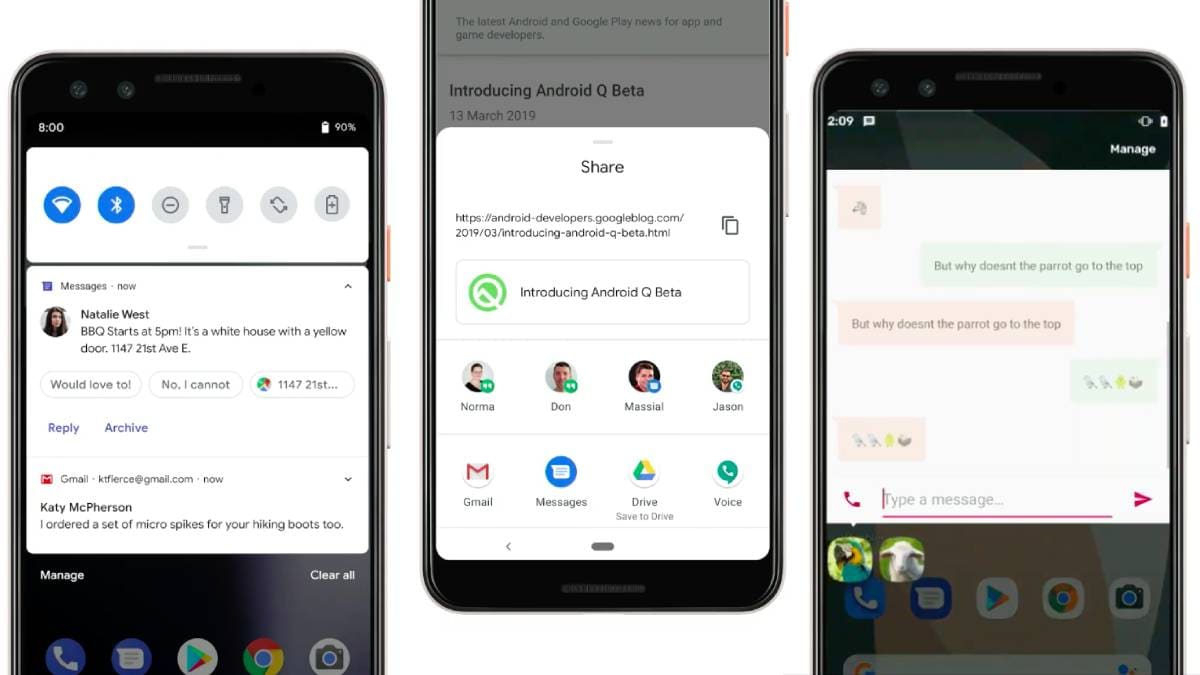 Google executives announced and showed demos of several new Android Q features at the Google I/O 2019 opening keynote on Tuesday, and many more details have emerged in deep-dive sessions over the course of the company's annual developer conference. Through a series of talks, Google product managers and engineers have shared several examples of what developers can do to take advantage of the new features, and so we can also get an idea of what's in store for users once Android Q releases later this year.

The most interesting changes are the ones that deal with new user experience elements such as notifications and multi-tasking capabilities, but there's also a lot going on under the hood as Google continues to tighten security in Android Q. We're going to check five of the most important ones out in detail.

One of the most interesting new Android Q features is a completely new style of notifications, called Bubbles. Similar to the Chat Heads that some messaging apps use, Bubbles allow users to quickly multitask while carrying on a conversation. Floating icons will appear on screen for chat notifications. They can remain there so a user can pick up a conversation at any time. Users can drag these to any part of the screen, and simply tap them to expand the associated app's message view and composition tools.

Bubbles will be prioritised for communication notifications, and users will be able to pin them to their homescreens for continual access. Bubbles are designed for notifications that require or can lead to a lot of user interaction. Google understands that they will take up screen space, compete for user attention, and might potentially be annoying. Not all notifications need to be presented as bubbles, so they will be limited to messaging, calling, and user-initiated interactions.

Android Q will also introduce a hierarchy system for notifications, classifying them into Gentle and Priority tiers. This is intended to help users manage the overload of notifications that we all have to deal with. Priority notifications will grab users' attention with sounds and status bar icons, and will appear on the lock screen, while Gentle notifications will always be silent and will simply live in the pull-down notifications shade.

Some notifications, while important, aren't time-sensitive, and users should be able to check them when it's convenient, not necessarily when they are generated. Now, in addition to the priority rules that developers and users can set, Android Q will use on-device machine learning to help categorise notifications as either Gentle or Priority.

3. Auto suggestions: Quickly respond to messages and use information sent to you

In addition to the new sorting mechanism, notifications in Android Q are also becoming richer, with suggested phrases and actions for quick replies, and direct deep links. This is similar to the Smart Compose feature that rolled out for Gmail last year. By default all notifications from messaging apps will let users quickly send useful contextual information as a reply, or launch an app, such as Google Maps, if the received message contains an address.

Android Q comes up with these suggestions based on machine learning analysis of a message's content. Developers can override the defaults and offer custom suggestions that might be more context- or medium-appropriate. App developers can also choose whether or not to allow users to tap to edit suggested replies before sending them.

4. Redesigned share sheets: Quickly and easily send things to other people and apps

Android Q has a completely new share sheet, which is the UI that appears when you want to send content from within an app, such as a link or a snippet of text, either to a specific person or to another app in order to do something with it. The new sheet is simpler to use and makes the available options more obvious. It's also designed to be quicker.

The sheet will have a preview of content right at the top, so users can get an idea of what recipients will see. There's a default style for this, but developers will have options to customise the preview with rich metadata including a thumbnail and additional descriptive text. The overall UI is meant to mimic that of the Android launcher, with a list of auto-suggested shortcuts above a full, alphabetised list of possible actions.

The upper rows will encourage users to share content within an app, with other users as the gargets. These rows will show up to eight targets, which are specific actions such as sending something to a particular person using a particular app. On the backend, developers will have access to a new API to define these actions and they can prioritise a small number of sharing actions that happen within the app, which will be shown first.

In 2018, there were zero critical Android security vulnerabilities for which a security update or mitigation was not available at the time of disclosure, according to the latest annual Android Security & Privacy Year in Review report. At a talk focused on security in Android Q, Xiaowen Xin, Product Manager, Android Platform Security, said that Google has already done a lot to make the process of deploying security patches easy for manufacturers and seamless for users.

In Q4 2018, 84 percent more devices received a security update than in Q4 17. Building on Project Treble, the company has announced Project Mainline. With Android Q, some system components including security-critical ones will be updated directly by Google, for example media frameworks, which accounted for about 40 percent of the bugs that were patched last year. Device makers can choose to have Android's TLS (Transport Layer Security) provider updated directly by Google as well. This should allow future bugs to be fixed much more quickly across the ecosystem.

Android Q also expands the use of compiler-level mitigations to harden the Android OS kernel as well as the user space, to reduce the potential exploitability of bugs. App developers can now target the Android Q API level to have execute-only memory enabled by default, which marks memory space as non-readable and prevents data leakage.

The processors used in low-end Android devices don't have hardware acceleration for encryption, which can cause slowdowns and discourage developers from adopting this kind of security. This affects not only phones, but also smartwatches and IoT devices built around less powerful hardware. To address this, Google has developed a new encryption mode call Adiantum, which can run up to five times as fast as AES without dedicated hardware. It's designed specifically for disk encryption on low-end ARM devices and uses only native CPU operations

Google says a world-wide community of security researchers have contributed to Adiantum, and it is fully open source, which helps keep it secure. By using this, developers can somewhat level the playing field between high-end and low-end Android users. All compatible devices that launch with Android Q will fully encrypt user data, without exceptions.

There are several other security measures for developers that will benefit users, including improved control over location sharing, encryption libraries built into the Jetpack development toolkit, protection against trojanised firmware, and more granular handling of biometric ID prompts.

It's very likely that we'll learn even more about new Android UX and security features over the next few months. We already know that Google Assistant and as well as plenty of the company's background tech will also bring new capabilities to phones running Android Q, so there's lots to look forward to when it releases later this year.

Disclosure: Google sponsored the correspondent's flights and hotel for the trip to Mountain View.