Best Free Photo Editing Apps for Android, iPhone and Others 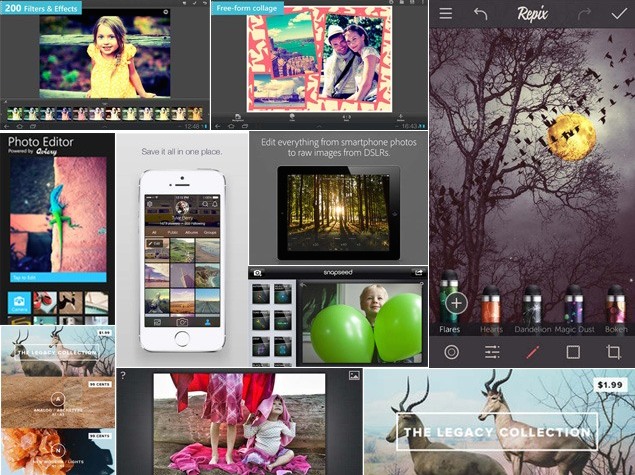 Editing photos is like applying finishing touches to a painting. Photographs often don't look as good as they could unless you apply that finishing touch. Since most people use their smartphones to take pictures, we have shortlisted the best photo editing apps that you can use on-the-go to take your photography to the next level.

VSCO (pronounced visco) Cam started out as a paid app but went free last year. It is one of the best photo editing apps on iOS and Android if you want advanced controls. VSCO Cam has a great collection of filters, which are better than those on Instagram. While some filters are free, you'll have to pay for many others. Don't let this dissuade you from trying the app, as the free filters are good enough for most people.

However, beginners will take some time to figure out how to use VSCO Cam because the app relies on icons and code numbers instead of words. For instance, filters have names like B1, X1, etc., which may be hard to remember initially. All editing tools are icons (sharpness is a triangle, saturation is a rectangle with a gradient, etc.) and it may take you a little while to go through all the tools and find what you need.

VSCO Cam has almost everything you'll need, but it isn't yet available on tablets. If you want a great photo editing app for the iPad, Snapseed is a good choice. Snapseed's interface is intuitive. Once you add photos to the app, select manual tuning and swipe upwards or downwards on the picture. This shows you different variables such as contrast, saturation, etc. Select any one and simply swipe towards the right to increase its value or in the opposite direction to reduce it.

This app is walking the tightrope between ease of use and advanced functionality. So far, Snapseed has got the balance just right. For power users, Snapseed has the selective adjust feature. This lets you change contrast, etc. on any part of the photo, without editing the whole picture. Snapseed's filters range from great (Grunge, Retrolux, Vintage) to average (Drama, Black & White). VSCO Cam has a better variety of tools, but Snapseed makes it easier to access all of its tools.

Snapseed is available for iOS and Android.

Lightroom and Photoshop are the reasons behind Adobe's iron grip on the desktop photo editing market. Lightroom for iPad isn't good as a standalone photo editing app, but it shines when used in conjunction with Lightroom for Windows or Mac. This means that you will need an Adobe subscription (around Rs 2,000 per month) to make the most of this iPad app.

Apart from being one of the world's most popular photo communities, Instagram is a fast, hassle-free photo editing app. Its filters are adequate for most people, but not for power users. If you are into black-and-white photography, you might want to try other apps because Instagram's filters aren't the best.

Autodesk's photo-editing app Pixlr Express is quite useful when you want to remove unwanted spots or marks from photos. Whether it is dust on your camera's lens or flash burning out a small portion of the image, Pixlr Express is a good app for image correction. Available for both Android and iOS, Pixlr Express has easy to use tools, which help you touch-up images quickly. It has enough tools for power users too, coupled with Photoshop-like effects such as pencil, poster, sketch and halftone, among others.

Like Instagram, Flickr has a great community of photographers. Unlike Instagram, however, Flickr has advanced editing tools, which is better for enthusiasts. Another advantage is that Flickr doesn't restrict you to square photos. Its built-in filters are fairly good too. The only major negative is that Flickr's Windows Phone app isn't as good as iOS and Android variants.

If you are a Windows Phone user, Photo Editor by Aviary is one of the best apps for tweaking pictures. Although the app still works well, you should know that its developers stopped updating the Windows Phone version last year. This app - under active development for iPhone and Android - also makes it easy to add text, drawings and stickers to your photos. Apart from these, it has all basic editing tools such as filters, effects, crop, rotate, etc. It doesn't have much in the way of advanced options, but that shouldn't be a problem for casual users.

If you like pretty apps, then both Repix, and the next app in the list, will appeal to you. Apart from great design, Repix has some cool filters, basic editing tools (brightness, saturation, etc) and even effects such as flares and posterize. If you want more filters or effects, you can purchase those through the app.

Litely is similar to Repix, but it has fewer features and is easier to use. You can easily apply preset effects to any photo. A two-finger swipe shows you a before and after view of the picture. This makes it easy to see how an edit has changed the picture.

BlackBerry users don't have access to many great photo editing apps. However, Photo Studio is a fairly good option for those using BlackBerry 10. It is a simple image editor that lets you take pictures and apply effects and frames to those. Although its collection of filters is better than those on Instagram, the app lacks advanced editing tools, apart from one that lets you correct RGB levels. This means that those who want fine control over their images will be disappointed. Photo Studio also lets you make collages and apply sketch effects to your photographs.

We hope that these apps helped you make your photographs look professional. In case we missed any of your favourite editing apps or if you liked our choice of apps, please leave a comment to let us know.