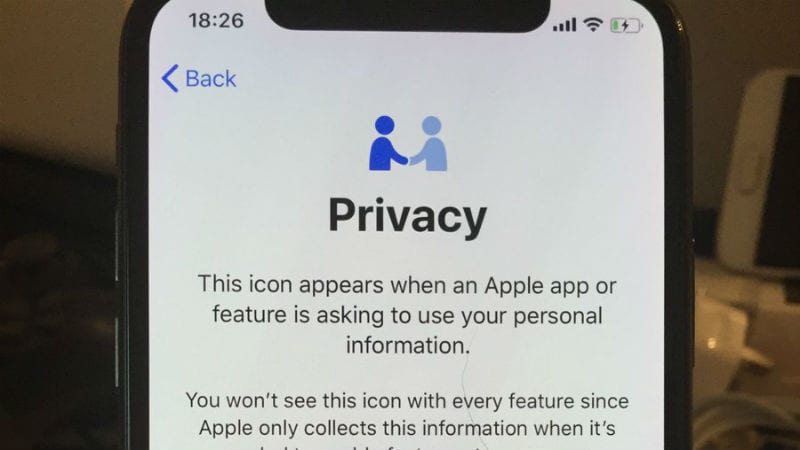 Apple is reportedly planning to unveil a new privacy icon in the upcoming iOS updates. While Apple already has several safeguards in its mobile operating system, in place, the new icon is said to have been designed to prevent iCloud password phishing scams. This feature was spotted on the latest Apple iOS 11.3 Beta version.

The beta version of iOS 11.3 was released by Apple on Wednesday and it came with the new security feature. The iOS beta update works on iPhone, iPad, and iPod Touch models, but it is currently available for developers, Apple said. Following the release, several users on Twitter highlighted the new Privacy icon that will appear when Apple apps ask for a user's personal information.

According to Crystal app's developer Dean's tweet, Apple describes the new feature as: "You won't see this icon with every feature since Apple only collects this information when it's needed to enable features, to secure our services, or to personalise your experience." It further added, "Apple believes privacy is a fundamental human right, so every Apple product is designed to - 'use on-device processing wherever possible', 'limit the collection and use of data', 'provide transparency and control over your information', and 'build on a strong foundation of security'. Interestingly, the new feature works on macOS as well.

Notably, iOS users are used to seeing random pop-up menus, a fact that a rogue developer could abuse. Since there is no way to tell the password dialogue created by an app from the system-level pop-up, a user can easily be tricked into sharing their most sensitive information with the fraudulent agent thanks to the spoofing.

Last year in October, a potential design flaw was found by Felix Krause, an iOS developer. The bug allows any developer to recreate a genuine-looking password pop-up menu in their apps. Meanwhile, Marco Arment, another iOS developer had tweeted, "It's long past time that Apple removes the random password popups that plague iOS. They're a security flaw that should not exist in 2017." The new Privacy icon is perhaps a response to such concerns.

Apart from the privacy icon in iOS 11.3, Apple has promised to deliver "new ways to experience augmented reality on iPhone and iPad, new Animoji on iPhone X, new features in Apple Music, Apple News, HomeKit, and more. Additionally, Apple CEO Tim Cook had recently said that in the next iOS update, users will be able to disable battery performance throttling their smartphone speeds.