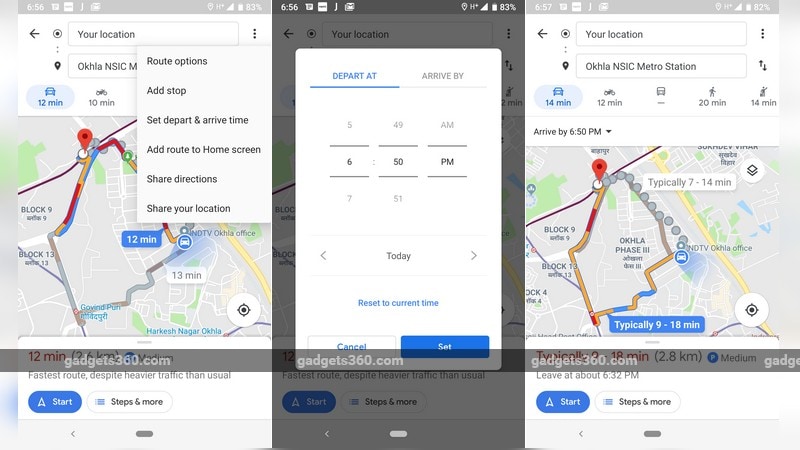 Google Maps has been on the receiving end of multiple new features over the past few months such as auto-rickshaw mode, estimated ride fare information and suggested routes among others. The newest feature making its way to Google's navigation app is journey time estimation by adding the departure or arrival time for car navigation. The feature has already been available for quite some time on the Google Maps app under the public transport mode, but it has now finally been expanded for cars as a navigation option.

Thanks to the new 'Set depart and arrive time' feature, which is now available on Google Maps for Android, users driving a car can now set the departure time as well as the date and time to estimate how long their journey will take and at what time they will reach their destination. Likewise, one can enter details such as date, time and the arrival date for a journey to know when they should depart depending upon the distance. It must be noted that the feature has been available on Google Map's desktop client for quite some time as well as the mobile app, but only in case of public transport for the app. As for which version number of the Google Maps for Android app has the new feature, we were able to spot it on a wide variety - v10.8.0, v10.7.1, and v10.6.2 beta - implying it's a server-side rollout.

The new feature can be accessed by tapping on the ‘Menu' icon at the top-right corner and then selecting the ‘Set depart & arrive time' option. However, it appears that setting the arrival time won't trigger a notification action to alert users when they should leave, as the same is absent. Another minor drawback is that if users set the arrival time to know when they should leave, there is no way they can keep a tab on unexpected traffic jams which might alter their departure time. Android Police was first to report the new feature's addition, adding that the v10.8.0 version which is available on APK Mirror enables the feature.

Google Maps reportedly received a speed trap and audio warnings functionality earlier this month, alongside a speed limit feature which recently went live for some users In the US. While the former is used for viewing reports of incidents which might cause journey delay on a route, the latter allows users to see speed limits on routes in the Google maps app for Android and iOS.